IF YOU come across a stationary cow as you are wandering Bratislava's streets this summer do not worry - it will not be a case of sunstroke, just one of the model cows of the CowParade project. The organizers envision it like this: 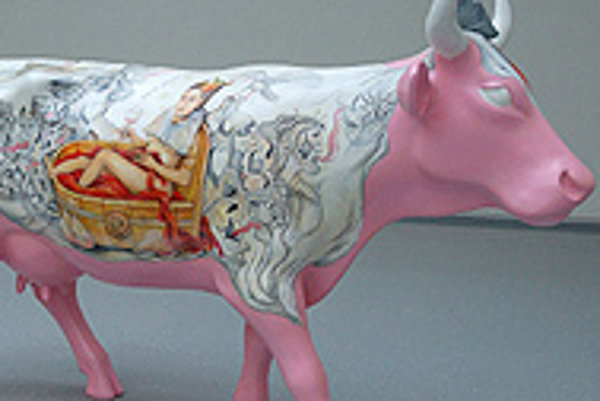 IF YOU come across a stationary cow as you are wandering Bratislava's streets this summer do not worry - it will not be a case of sunstroke, just one of the model cows of the CowParade project. The organizers envision it like this:

"Next to [the famous Bratislava statue] 'Man at Work' is a cow lying down on the ground. She is wearing the same cap as the worker and appears to be coming out of a ditch. A bit further on you can see a cow standing next to the [city's other landmark] Schone Naci's [Handsome Naci]. She is wearing a nice suit and is smiling from ear to ear. Excited, you walk further on to Main Square, where five other cows are scattered among the benches and souvenir shops. One is herself a bench."

CowParade attracts tourists and citizens alike. They (re)discover the city and the artists get to communicate their ideas in a direct and original way. Moreover, money collected from auctioning off the bovine replicas is directed to aid projects. Although the basic idea is the same in each city, every CowParade project, and every cow, is an original.

"The great thing about CowParade is that wherever we go, it's always local artists who paint the cows. In Bratislava, it will be Slovak artists working on Slovak cows, creating Slovak designs, which will be enjoyed by the people of Bratislava," said Charles Langhorne, managing director of CowParade Europe Ltd.

Up to 100 Slovak cows might "mooove" into the capital's streets in the middle of June.

The first Slovak cow is the work of film director Juraj Jakubisko. Entitled Čachtická, the cow illustrates the theme of his new film, Love Story Bathory, on a pink background. The film is about the countess of Čachtice castle, though more than her cruelly killing young virgins and bathing in their blood, Jakubisko explained.

The director was at first unsure of just how to cover his cow.

"Firstly, as a great Slovak, I thought of painting a thousand-year-old cow [capturing the nation's 1000 years of history]. Then I thought of [folk hero Juraj] Jánošík," the artist revealed.

Having four days to finish the work, he finally opted for the Čachtice countess, whom he depicted bathing in red film. Film in blue, red and white, symbolizing the Slovak flag, can also be seen flowing from the crown of the cow's head, into which Jakubisko buried an axe.

To the artists, the cows are a three-dimensional piece of paper, a blank canvas with which to work. The unusual shape forces them to adopt new, innovative approaches to their work.

"It enriches not only the viewers but also those who work on it," Jakubisko said.

The untraditional "canvas" originated in December 1996, when Pascal Knapp's father, a Swiss artist and the creator of the CowParade concept, asked him to mould a life-seized statue of a cow.

This was to serve as a 3D paper for the artists participating in a planned exhibition in Zurich.

The local Union of Businessmen, the sponsors of the exhibition, liked the cow so much that they paid the costs of producing the mould to manufacture laminated plastic castings.

A year later, Pascal added two sisters to the standing cow - the lying down cow and the grazing cow.

"The first CowParade event was in Zurich, Switzerland, in 1998. Since then we've taken cows all over the world," said Langhorne. The number of artists who participate in the project differs from town to town. Some saw 25 cows in their streets, some 125.

In Slovakia, the organizers approached 250 artists, including art students and talented children, such as the Roma pupils of the Ján Sajko class at the Jarovnice settlement. In the summer, they expect to see around 100 finished works at the train main station, the Polus City and Aupark shopping malls, and the streets of the Old Town.

"The great thing about CowParade is that it's going to be new for the people of Bratislava. If we put 50 cows out there they are going to go 'wow'. If we put a hundred cows they will go 'wow'. We'd get the same 'wow' for 150. It's going to be great for the people and I know our cows are going to love it here. It's a beautiful city and I am looking forward to seeing the cows put smiles on people's faces," Langhorne said.