Frankl's testimony speaks to the world

THE PAINTINGS of Adolf Frankl have narrated the trauma of the Holocaust at exhibitions throughout the world. Now, the story of the Jewish artist has been brought to life on film to address a larger, younger audience. 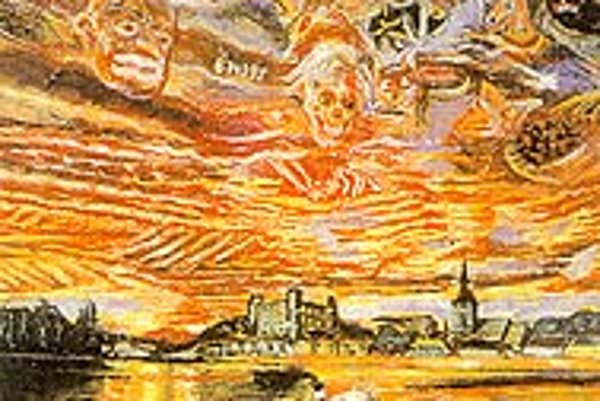 Font size:A-|A+0
THE PAINTINGS of Adolf Frankl have narrated the trauma of the Holocaust at exhibitions throughout the world. Now, the story of the Jewish artist has been brought to life on film to address a larger, younger audience.

On the occasion of the 60th anniversary of the end of World War II and the liberation of the Nazi concentration camps, Frankl's son Thomas introduced a documentary about his father's life and paintings, Visions from the Inferno, directed by Peter Dimitrov.

The film, an hour-long co-production by Slovak Television (STV) and Aaron-Egele Film, premiered at Bratislava's Tatra cinema on March 8.

"We want people to remember the history of these years. We don't want to sue or judge anybody, we just to want to tell our story," said Thomas Frankl, the film's producer and narrator.

Adolf Frankl's colourful paintings prove a picture is worth at least a thousand words. His artworks convey the horror of the Holocaust far more vividly than many books.

The film too is an artwork in itself. The technique of focusing on the paintings then dissolving into photo stills before cutting back to the paintings, is extremely effective. A voiceover of Adolf Frankl's thoughts and reflections adds poignancy to the narrative. The reconstruction of the story with actors brings the reality of history to life.

The filmmakers draw out and preserve the testimony of the Holocaust in the hope that young people will learn that a return to the prejudices of the past and the barbarism they brought will never be repeated.

Although the film celebrates the life of just one man, its message is universal. Frankl himself says in the film: "With my work I leave a memento to all nations. Nobody, no matter of what religion or political belief, must ever undergo this or similar suffering!"

Adolf Frankl was born in 1903 in Bratislava. After being captured by German and Slovak guards, he was first deported to the Slovak concentration camp in Sereď, then to the extermination camp at Auschwitz, in Poland.

He escaped the March of Death of January 18, 1945, and hid in a barracks for typhoid sufferers until the Red Army liberated the camp on January 27. Frankl returned to Bratislava, which he later again left because of another totalitarian regime, that of the Communists. He died in Vienna in 1983.

Explaining why STV wanted to be a part of the project, Ivan Janovský said, "It was the power of the pictures attached to the story idea that decided it." STV's second channel, Dvojka, will show the movie on March 18.

The film is also to be distributed around the world through Los Angeles' HBO, Munich's New World Media Filmproduktion and Prague's Eurokim.

A shorter version of the film in English, German and Slovak will be issued in DVD format to be used in schools.

"In a few years, no more witnesses of these events will be left. But there will be records, like this documentary, which preserve the memory," Adolf Frankl's son Thomas said.