MOVIES are often better than the sum of their parts. But what about when one specific part is so superior to the rest that it risks being dragged down by the surrounding mediocrity? Ray treads perilously close to this, as Jamie Foxx's lead performance as R&B pioneer Ray Charles truly is something to behold, but the rest of Taylor Hackford's film is typically overly sentimental Hollywood fluff. 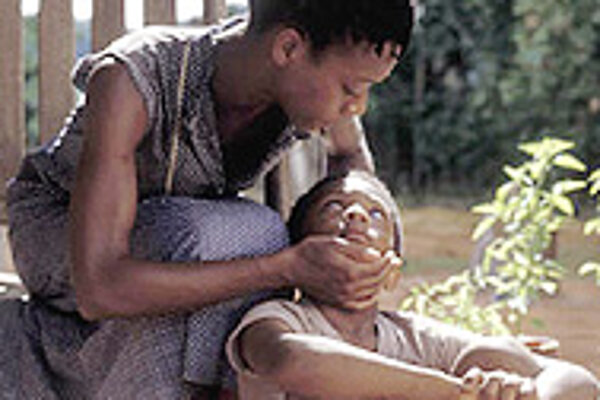 MOVIES are often better than the sum of their parts. But what about when one specific part is so superior to the rest that it risks being dragged down by the surrounding mediocrity? Ray treads perilously close to this, as Jamie Foxx's lead performance as R&B pioneer Ray Charles truly is something to behold, but the rest of Taylor Hackford's film is typically overly sentimental Hollywood fluff. In other words, it's exactly what the Academy loves to reward come Oscar night.

Now that the dust of Oscar night has settled and Foxx has won Best Actor, perhaps it's finally time to evaluate his performance on its own merit and not as part of the award season buzz. Whether or not Foxx really deserved the Oscar is actually irrelevant; when Paul Giamatti wasn't nominated for his exceptional performance in Sideways, the concept of "Best Actor" became null and void.

Having said that, Foxx is outstanding. He has Ray Charles' mannerisms nailed down perfectly - the Southern politeness, the good humour, the endearingly awkward and rushed cadence of his slang-filled speech, and the way he sways ecstatically to his music. This is not to mention what is Charles' most distinguishing characteristic (besides his immense musical talent): his blindness. Foxx plays this with total believability - surely in no small part because he reportedly gave the entire performance "blind", with his eyes covered by prosthetics.

The movie touches upon - but does not explain - Charles' blindness. He developed glaucoma as a young boy, which is rendered in a few flashback scenes that are pretty but too self-consciously "poetic" to be taken seriously. They just scream "important childhood memory", with their hyper-saturated colour and surreal pacing and setting. It makes sense to visually set apart the portion of Charles' life when he had his eyesight, but these scenes depict an obnoxiously romanticized old South and contain some unintentionally laughable dialogue.

It is certainly hard to condense one man's life into a two-hour movie, but having the protagonist's mother constantly supply important life-guiding bits of wisdom through excessively dramatic speeches is not a helpful tactic. In this respect Hackford's movie is just like the worst of the Hollywood biopic tradition. It tries to simplify a man's or woman's life into a few key phrases or speeches (often given by the mother) and one big traumatic experience and recurring nightmare.

Foxx's strong work almost seems out of place in this movie. Though he practically embodies a young Ray Charles, he doesn't provide him with much depth. In a way this is refreshing, as far too many biographical performances become melodramatic caricatures that push the public's perception and assumptions onto their subject. Instead, Foxx plays Charles as an enigma - a real, complicated man who doesn't necessarily communicate his inner thoughts and demons to everyone around him.

Unfortunately, Hackford constantly shows us exactly what he thinks Ray is feeling, from his difficult childhood (when he went blind and his brother drowned) through his early musical struggles and subsequent success to his battles with heroin addiction and understandably jealous wo-men. All of this is portrayed using standard visual gimmickry and unconvincing drama; luckily, Foxx and his fine supporting cast make it bearable and sporadically enjoyable.

Obviously, what also makes the movie a worthwhile couple of hours is the music. Ray Charles - with his innovative mix of R&B, gospel, country, jazz, and pop - was one of the undisputed geniuses of 20th century American music. Any chance to listen to his beautiful, soulful songs should be taken without hesitation. But be forewarned: If it weren't for Foxx's performance, you'd be much better off sitting at home with your record player.