EIGHT months before Slovakia's regional elections, political parties are discussing their strategies and considering possible coalitions that are different from those on the national level. 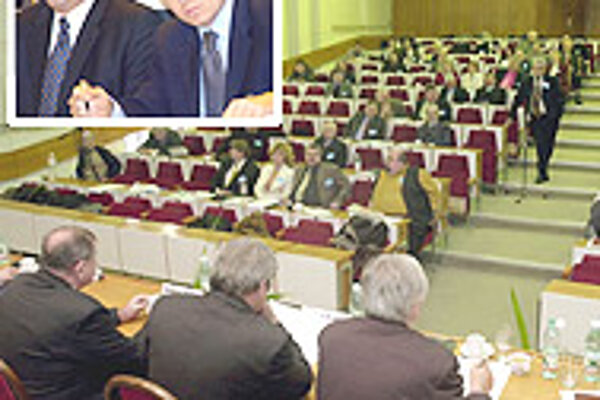 Font size:A-|A+0
EIGHT months before Slovakia's regional elections, political parties are discussing their strategies and considering possible coalitions that are different from those on the national level.

Both the ruling and opposition parties have expressed interest in working with each other on the municipal level.

Even the Movement for a Democratic Slovakia (HZDS) announced that it would not rule out allying with fellow opposition party Smer, despite HZDS Chairman Vladimír Mečiar suggesting the opposite.

After the March 12 national meeting of the HZDS, however, party member Karol Džupa announced that the HZDS would consider Smer a coalition partner in the municipal parliament after all.

Only the Slovak Communist Party and, to a certain extent, the Hungarian Coalition Party (SMK), were left out of the communal cooperative spirit.

Representatives from the Christian Democratic Movement (KDH) said cooperation with the Slovak Communist Party was "not recommended" while members from the Slovak Democratic and Christian Union (SDKÚ) ruled it out entirely.

Some parliamentary opposition and coalition parties have suggested forming a coalition in the southern Slovak regions of Nitra and possibly Trnava that would leave out the locally dominant SMK and weaken its grip.

According to Grigorij Mesežnikov, the head of the Bratislava-based think tank Institute for Public Affairs, the reason that regional political partnerships are strikingly different from national-level politics stems from the regional election system.

"The power of the parties in individual regions does not always correspond with the final results of the election," Mesežnikov told The Slovak Spectator March 15.

The HZDS currently occupies most of the parliamentary seats in the Trenčín region. The party also remains strong in some parts of Central and Eastern Slovakia, with its supporters scattered around the country in villages and smaller towns. On the other hand, the HZDS is virtually without support in the Bratislava region.

The SMK has its electoral stronghold in Southern Slovakia. The non-parliamentary Democratic Left Party (SDĽ) remains strong in the western regions, with the left wing party Smer doing well in Eastern Slovakia.

Because of the nature of the municipal elections, however, it is difficult to estimate the results of the December elections, even though parties can identify where their voter base resides.

According to Mesežnikov, political parties will make use of "partnerships based on the closeness of party programmes".

"This is happening in Bratislava now, for instance. I believe that where it is possible to forge programme-based partnerships, it will happen," the analyst said.

Mesežnikov thinks that political coalitions that are unlikely to form on the national level are more feasible on the regional level.

"Regional and national politics is different because the issues are different. At the same time, relationships between the parties develop differently on the national and regional levels. Problems such as Slovakia's foreign orientation is no longer an issue," said Mesežnikov.

At a March 10 meeting, however, the ruling coalition parties rejected the proposal. PM Mikuláš Dzurinda essentially said it was too late in the process for restructuring: "Considering the stage in which we are ahead of the communal elections as well as the approaching parliamentary elections, we decided that we will not open this issue," he said.

Another regional administration reform, one that would have postponed regional elections by one year to December 2006, was also rejected. Opponents argued that the scheduled time of the regional elections was too near to justify such a major change.

Although Mesežnikov thought the one-year postponement was rational in its essence, he is not surprised the reform was rejected.

"I am afraid it is not likely to be upheld politically at this moment," he said.