Bush, Putin and the Slovak owner of the "American dream"

DOCTOR John Karch lives near Washington, DC. He planned a special trip to Slovakia in February of this year, exactly at the same time that presidents George W Bush and Vladimir Putin met in Bratislava for their summit. The 82-year-old Karch made the trip with his son, Paul. 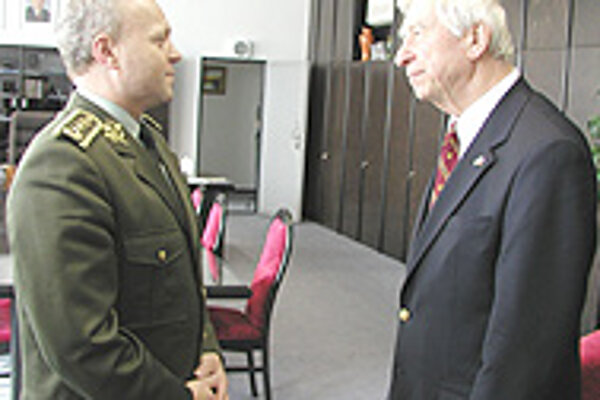 DOCTOR John Karch lives near Washington, DC. He planned a special trip to Slovakia in February of this year, exactly at the same time that presidents George W Bush and Vladimir Putin met in Bratislava for their summit. The 82-year-old Karch made the trip with his son, Paul.

Karch said that as a person who has spent his entire life studying the relationship between the East and West, he could not miss out on something so personally symbolic: "his" American president meeting the Russian president in "his" Bratislava.

For John Karch, February's East-meets-West summit in Bratislava mirrored his own "American dream", which began in 1934 when the doctor was still a young boy called Janko Karč.

On the eve of World War II, together with his mother and brother, Janko boarded a ship setting sail for the United States of America. "My father left for the US to become a bread winner in 1923. He worked in Trenton (New Jersey) as a workman in a local steel factory. After a few years of hard work he became a foreman. After this, he returned home for a few months [to a village called Veľká Domaša in Eastern Slovakia, which is now underwater as part of dam Domaša - ed. note]. My father decided that his family would move out to America as well. And so in 1934, we all boarded the ship for America," says this cultivated man.

Karch celebrated his 82nd birthday in February. He recalled that both his parents' lives had their share of bad luck. His father fought in World War I and spent long years in Russian captivity. He lost two of his siblings to malnourishment and illness. Bad luck even followed the family to America. Karch's brother slipped into a river and drowned.

According to Karch, his parents did all they could to help their only remaining son so he could study and make something of himself.

In the Pacific during the war

When Karch graduated from high school he decided not to enlist in the army, for his parents' sake. When the summer was over, he started at Temple University in Philadelphia. But just before the end of the second semester, in April 1943, he received a summons to join the military.

"I joined the navy. After initial training I was allocated to a reconnaissance air force squadron. Our base was located in Guam. We flew over Pacific islands occupied by the Japanese, as well as above Chinese territory."

Corporal John Karch was flying as a radar operator and gunner on a US Navy B-24, a special reconnaissance aircraft. When people ask him about the danger during his flights, he just shrugs his shoulders. What could be more dangerous than flying over Japanese territories, mapping them and taking pictures? The Japanese knew that as a result, the subsequent air attacks would be more efficient. Therefore they did all they could to shoot the US planes down.

"Before we flew over China, the commander told us that he would not order anybody to fly. All who flew were therefore volunteers. From a fuel point of view, there was only about a 50 percent chance of return. Out of the remaining 50 percent, a good chunk of it was taken up by the probability that we would be shot down by antiaircraft defence guards. In spite of these facts, I don't know anybody who would not have voluntarily stepped forward."

Karch was also one of the men who captured the legendary Iwo Jima on film. This 7.5-kilometre-long and 4-kilometre-wide piece of land was particularly strategic in March of 1945. Just 1,000 kilometres distant from Tokyo, the Japanese had placed an airport with radar equipment there, which radically complicated American air attacks on Japan taking off from Guam. The Americans planned the attack on Iwo Jima for five days. So we asked John Karch why, in spite of 80,000 American soldiers deployed on the mission, it took 34 days to take Iwo Jima?

"Large and superbly protected underground bunkers cleverly interlinked with tunnels and catacombs were impossible to detect from the air. The Japanese were creeping out of them even at places already taken by our forces. They were all around our soldiers, behind them, in front of them even below them. Our soldiers fought for each metre."

At Iwo Jima, 6,140 American soldiers died and 8,000 were wounded; 22,000 Japanese died as well. The world remembers this victory mostly because of one specific, monumental statue commemorating the event, and the subsequent victory of World War II. At the Arlington, a military cemetery in Virginia, the statue is of soldiers erecting the US flag at the highest point of Iwo Jima. The statue is based on a photograph taken by military photographer Joe Rosenthall on February 23, 1945. The officer in charge of the group of soldiers photographed was sergeant Michael Strank (Michal Strenk), whose parents immigrated to America from Jarabina village in the north-eastern part of Slovakia. A reconnaissance battalion is named after Strank near Bardejov.

Sergeant Strank died during the continuing fights at Iwo Jima on March 1, 1945. His countryman John Karch could also have died. He remembers Okinawa where his plane was hit by antiaircraft fire. Although badly damaged, the aircraft managed to return to the air base intact. Perhaps John received the luck that was missing from his parents' lives.

All told, Karch spent 610 hours flying between 1943 and the end of World War II. He was decorated with five medals for bravery and received the air force cross.

What was the Slovak countryman doing in America after the World War II? "Of course, I continued my studies," he says, smiling.

Karch earned his Bachelor's degree from Temple University in 1948 and immediately after, a Master of Arts from the American University in Washington. In 1951 he received his Ph.D in politics and international relations. Karch specialized in relationships between the East and the West, particularly between the US and the former Soviet Union.

John Karch spent most of his life working for the US Information Agency, which explains and supports American foreign policy and promotes national interests abroad. He mostly worked in Eastern Europe and in the Soviet Union. His wife and two children followed him to Bulgaria, Yugoslavia, and East Germany; for a brief while, they even lived in Slovakia.

"In 1974, I was a director of an exhibition that was visiting Bratislava. It was named Pokrok (Progress) and the living environment. We cooperated with Incheba [Slovak exhibition company]."

Karch felt strong ties to Slovakia, even when he was denied entrance to Czechoslovakia in 1985.

"Between 1982 and 1986 I worked in Vienna. From the NATO point of view I was appointed to a position of spokesperson and PR director. I also carried a diplomatic passport. It really surprised me that only my two daughters were allowed to cross the border [into Czechoslovakia]. I was left to stand behind the Iron Curtain. It was a shame. They stayed only few days in Bratislava as they were too scared to travel to Eastern Slovakia by themselves.

Between 1979 and 1982, Karch worked as a professor at the National War College in Washington, DC. He also remembers Eduard Kukan (Slovakia's current Foreign Minister). In those days Kukan worked for the Embassy in Washington, DC, where Karch paid a visit with his students.

And what is the airman doing today? He and his wife Loretta enjoy his grandchildren, he says. Karch definitely keeps busy outside his personal life, however. He spends time working in one of his sons' firms as well as for the Slovak League of America. He is managerial director of the Slovak American Information Council and the secretary of the Stefan Banic Parachute Foundation. With his background in politics and diplomacy, Karch even helped in Slovakia's effort to become a member of NATO. He also writes articles for the magazine Jednota (Unity).

Given his history, it is not surprising that Karch is decorated with the white double cross of the second category. In 1998, Slovak President Michal Kováč personally awarded him the honour, paying tribute to his contribution to both the US and Slovakia

Slovak Army Chief of Staff General Ľubomír Bulík received Karch during his recent February visit to Bratislava. All that is left for us now is to congratulate this very hard working, cultivated and positively tuned man who talks about his "American dream" becoming a reality.