TO BRING discoveries in the world of nature to the general public, Slovak documentary filmmaker Pavol Barabáš has crossed high mountains, polar landscapes, wild rivers, inaccessible jungles and torrid deserts. Until recently, though, he had never delved underground. 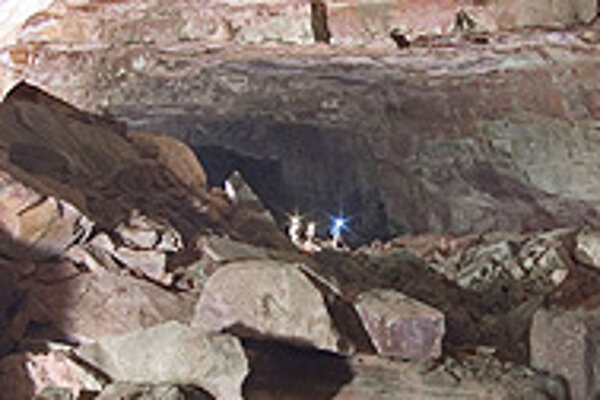 Font size:A-|A+0
TO BRING discoveries in the world of nature to the general public, Slovak documentary filmmaker Pavol Barabáš has crossed high mountains, polar landscapes, wild rivers, inaccessible jungles and torrid deserts. Until recently, though, he had never delved underground.

However, knowing spelunkers to be a special breed and learning of a fantastic discovery somewhere deep inside the spectacular flat-topped Venezuelan mountains, Barabáš was quick to agree to join an expedition that would lead him deep beneath the earth's surface. Especially when Braňo Šmída, the leader of the expedition, offered solace by declaring: "Don't worry, you'll pay for everything yourself."

It has been a few weeks since the Venezuelan-Slovak-Czech team returned from Chimanta-tepui in Venezuela, one of the most inaccessible places on earth. The 25 spelunkers, geologists, microbiologists, botanists and other experts spent 12 days mainly exploring the inside of this mountain, which contains the world's largest sandstone cave, Cueva Charles Brewer. The cave is named after the South-American biologist Sir Charles Brewer, who discovered it in January 2004.

"The cave is monstrous - its galleries are so huge that even a Boeing could fly through them," said Šmída, vividly illustrating the cave's 80-metre-wide and 40-metre-high chambers.

Šmída, who has been spelunking for 20 years, says that there are only a few other caves as spacious as this one, in Papua-New Guinea, for example, or Slovenia. But what makes Cueva Charles Brewer so special is that it developed in sandstone with a high quartz content, which was considered dissoluble for a long time.

In addition, the specific climate and absolute darkness in the cave gave birth to unique bacterial clusters, similar in shape and colour to mushrooms, but as hard as stone.

"Experts from all around the world were surprised by this discovery. Some had a hard time believing that the cave could develop to such dimensions. Moreover, the cave might be one of the oldest in the world as the rocks of its walls were formed when Africa was still connected to South America in the ancient continent of Pangaea some 1.8 billion years ago," Šmída said.

This year's February filming mission followed last year's expedition, during which a seven-member team made the first explorations into the cave. Its galleries are hidden amongst numerous cracks and chasms up to 100 metres deep. To move around there is extremely difficult and dangerous and any false step can end in a fatal fall.

Getting into the cave is the most difficult step of all. The flat-topped mountain's vertical walls stretch up to one kilometre high and are surrounded by the thick, virtually impenetrable Orinoco rain forest.

"To get there you either have to use a helicopter or spend hours cutting through the jungle with a machete," said Šmída, whose team opted for the helicopter. "It is enough of a risk even for a skilled and extremely experienced pilot. We 'landed' almost inside the cave's entrance, a few metres from its walls. It was impossible to switch off the rotors and we had to jump off and throw out the equipment while still practically flying," Šmída said.

To film in such extreme conditions, Barabáš used the latest HDV technology. The high definition technique made it possible for him to film undreamed of niches in the mountain and gain unique footage. Viewers may get to see them on screen by the end of 2005. A DVD of the film will come out in 2006.

"Filming in a cave is a great challenge. It's dark and moist down there and everything is difficult to access," Barabáš said.

"When Braňo talked me into the expedition, he claimed that crossing through a cave is just like a pleasant walk. My training and preparation included night tours, so I could get psychically fit for the dark.

"But what we did there, was not only crossing the cave, but also seeking out new entryways and cave areas in the unimaginably shattered surface of the Chimanta-tepui. I had to get used to caving techniques, all new to me, and learn to climb up 60 metres with a rucksack in the complete dark. Also just crossing the flat-topped mountain itself was very demanding. We didn't have a clue whether we would ever manage to cross the massif split up by 100-metre crevasses or not," said Barabáš.

Will he ever return there?

"No. But I said the same when I did my last documentary, Amazonia Vertical, which was filmed on the neighbouring Auyan Tepui."