IS THIS the future of Bratislava? With every blink of the eye, Slovakia's capital is changing, and everything seems to be rising - new buildings, prices, and the quality of its dining establishments. The funny thing is that this trend to-wards a luxurious future often harkens back to days of former grandeur. 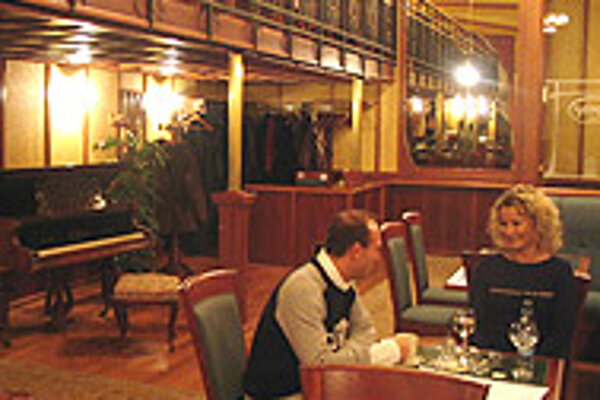 IS THIS the future of Bratislava? With every blink of the eye, Slovakia's capital is changing, and everything seems to be rising - new buildings, prices, and the quality of its dining establishments. The funny thing is that this trend to-wards a luxurious future often harkens back to days of former grandeur.

Such is the case with Štefánka, a restaurant and café dating back to the turn of the last century. Newly reopened after an eight-year hiatus, its restored interior matches the royal trappings one expects from a classic Vienna café, beginning with a coat check at the entryway. And this is no small surprise considering that the two cities were closely connected during the days of the Austro-Hungarian Empire.

The café wears its relation to the age of empires on its door. It took its name (with permission) from Stephanie Clotilde Luise Hermine Marie Charlotte - Princess Štefánia for short - in 1904. From this auspicious christening it remained one of the city's most prestigious spots into the 1940s. At this time its street address was Pallisadenweg and the café faced out onto the cobbled Kohlmarkt, which is today the traffic and construction-heavy Hodžovo námestie.

Its other foot in the present, Štefánka casts a beckoning glance to the tourist market and has a comfortable, popular feel. The waiters may wear suits but they are friendly rather than stiff. Those not interested in a meal can stroll in for coffee and pastries upstairs on the intimate balcony and there is a cellar outfitted in the style of a smoking club. Once the piano is repaired, the owners promise, they will host live music.

The menu itself is a bit oversized for its sleekly modest selection of dishes, each one named after royalty. The implicit promise of a minimal selection is that every dish is of equal quality, and Štefánka's kitchen follows through.

Adalbert, a rich duck paté starter, is lightly offset with orange sauce (Sk374). Alexander, on the other hand, is a finely chopped potato salad with apples and celery root whose light taste is complemented with a twist of lime. As for main dishes, the baked trout with crispy fried onions that goes by the name Rudolf is tender-fleshed and well seasoned. Hubert, a respectable portion of dark, soft rabbit comes with a somewhat disappointing wine sauce of undecided flavour.

Vegetarians, unfortunately, are treated to a lack of imagination served as fancied-up versions of either broccoli baked in cheese or pasta with cheese sauce. Perhaps only the poor ate meatless meals in the past, but certain trends of the present are worth recognition.

Dessert is a difficult proposition after a full meal here, and in addition to the café cakes and pastries on display, the menu sponsors several royal offerings. Viola, a battered pear set in a lake of vanilla sauce, is as rich as all the other items on the menu; indeed it is as rich as Bratislava's past and, one hopes, its future.