WHEN Christ descends to Earth for the second time, the world will end and the dead will rise and sinners will receive their just punishments. 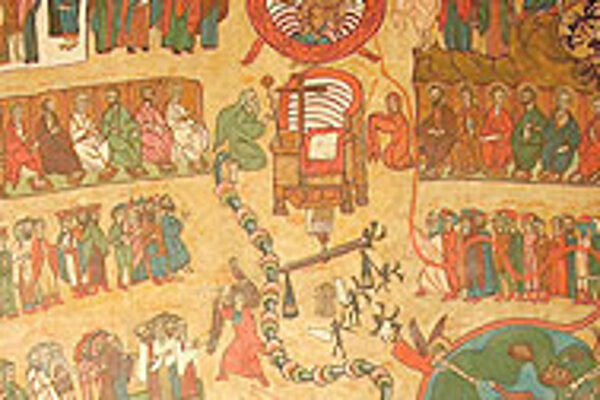 Font size:A-|A+0
WHEN Christ descends to Earth for the second time, the world will end and the dead will rise and sinners will receive their just punishments.

Such is the story informing The Last Judgement, one of the most precious and best preserved icons at the Museum of Ukrainian and Ruthenian Culture in Svidník, in northeast Slovakia.

The 16th century work was painted with tempera on wood by an anonymous iconographer in the Halič region in Ukraine.

The icon depicts the Christian belief of the Last Judgement, the final victory of justice over evil on earth.

It is composed of horizontal rows of images, divided by a vertical line of images, with the figure of Christ at the top. Below him are God's throne and the "worm of sin" squirming past the scales of Justice.

Two angels, Cherubim and Seraphim, unroll heaven in the form of a narrow blue band with images of the sun, the moon and the stars.

At the centre of the first row, a haloed Christ is depicted as the Pantocrator, ruler of the universe, judge of the living and dead, and saviour of the just.

The Mother of God, John the Baptist and angels accompany Christ.

The upper right-hand corner of the icon shows the archangel Michael destroying Satan and his angels. The opposite corner shows the holy city - New Jerusalem - descending from heaven for the chosen ones.

At the centre of the second row, Christ's throne stands ready with an opened gospel and the instruments of martyrdom. Adam and Eve kneel next to the throne, begging the Lord's forgiveness. The twelve apostles sit on either side of them, watching. The apostles, Christ and the angels form the tribunal.

In the third and fourth line we can see the arrival of nations: Jews, Greeks, Poles, Tartars, Turks, Ethiopians and Ruthenian Ukrainians. Among them is a group of the just - prophets, martyrs, monks, eremites.

Below the arrival of the nations, four angels pipe the resurrection of the dead at the four corners of the earth. The souls of the dead buried in graves, drowned at sea, killed by wild beasts and sea creatures wake up and are given life.

The river of fire rising from Christ's halo runs through all peoples and around the Earth where the souls are being resurrected; it takes them all into the underworld.

The souls of the dead are shown as naked figures, which are being swallowed by the two-headed dog Cerberus, carrying Lucifer with Judas' soul in his lap.

The dead are being sucked into the worm of sin. In his long body their agonizing journey begins. The souls proceed through the rings on the worm's body, each of which stands for one sin, to the scales of justice. The balance of justice hangs from the hand of God, jutting out from underneath his throne, protecting the souls of the already-weighed innocents in his palm.

In the lower centre, between paradise and earth and above hell, stand four beasts. A bear, lion, panther and dragon symbolize the four heathen empires - the Babylonian, the Persian, the Greek and the Roman.

On the left-hand side sits the Mother of God in paradise, attended by the two archangels, Michael and Gabriel.

Below, Abraham, Isaac and Jacob, the three most powerful patriarchs of the Old Testament, are sitting down, offering shelter to the souls of the just.

Directly underneath, the apostles Peter and Paul escort groups of the innocent to heaven's gate.

The lower right hand corner portrays hell as a place of eternal suffering and shows how sinners will be tortured.

This icon is an enduring testament to the faith and artistic skills of its creator.