Who was that masked skier?

ALMOST everybody skis in the central Slovak town of Kremnica. So what better way to welcome spring than having fun in the snow?
For the 44th time, Kremnica's ski enthusiasts announced their traditional carnival farewell to winter, the Easter Egg. 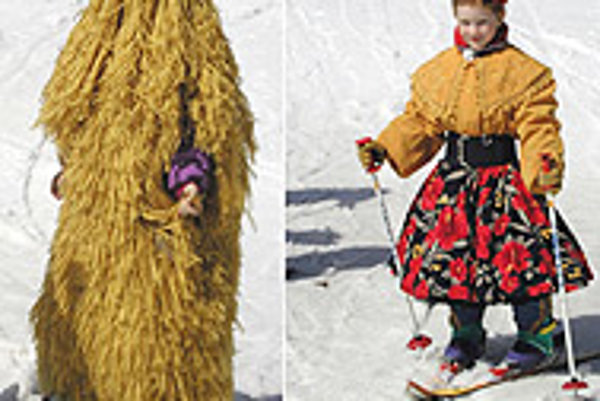 Font size:A-|A+0
ALMOST everybody skis in the central Slovak town of Kremnica. So what better way to welcome spring than having fun in the snow?

On Easter Sunday, March 27, an array of skiers wearing eccentric masks and costumes will line the mountain's ridge at the local Skalka ski resort.

If you go along be prepared to have a smile on your face. The poster for the event warns: "For people who don't know how to guffaw, this carnival is highly risky. And those easily offended should not even think of coming!"

Turning the carnival into a humorous parade was the idea of a group of locals, led by Rudolf Čillík, the former Czechoslovak ski champion.

Štefan Grosch, 82, long-time skier and one of the founders of the Kremnica Easter Egg said: "When [Čillík] participated at ski competitions in the Czech Republic, he saw the Czechs having fun with their Krakonoš, a mythical mountain God, similar to the Alps' Ullrich. He then brought the tradition here."

Locals and outsiders alike are busily dreaming up outlandish Easter Egg costumes within a particular theme. Last year it was European Union enlargement, but this season it is something very different.

The organizers of this year's contest want to underpin it with a new reality - the reality show craze.

"The entire country lives with reality shows," said Michal Lysek, from Kremnica's municipal office, one of the event's organizers.

He revealed that the whole event, including moderators, would be adapted to this idea. He expects skiing contestants to turn up wearing masks of the finalists in SuperStar and costumes inspired by other reality shows.

Lysek is also curious to see what some regular competitors will wear and mentions three male skiers. "They always surprise. They are three active gentlemen who come up with humorous ideas reacting to the current news, such as last year's EU enlargement or the Kia car plant [investment in Žilina famous for ongoing land ownership problems] a year before."

Around 1,500 spectators are expected to support approximately 100 masked skiers on Easter Sunday. 82-year-old Grosch will open the event.

"I am looking forward to it. It's a joy to watch the little kids skiing dressed in all kinds of costumes. And I am happy that the tradition continues," he said.

At the moment, the Skalka ski centre near Kremnica has two metres of snow. But Grosch remembers the times when they had to use conifer branches to carry the snow from the forest to have something to ski on.

He also recalls the hill, which they named Interski, after the Štrbské Pleso slope that hosted the world ski championships in 1970, being bare of any lifts. Today, the place is a popular ski centre.

The Easter Egg is open to everyone.