A PUDING Pani Elvisovej (PPE) concert attracts a special mix of fans. Punk mohawks pop up out of the crowd next to the twisted visors of hip hop fans while raver kids dance up front with those types you always find jumping around wildly at indie rock concerts. 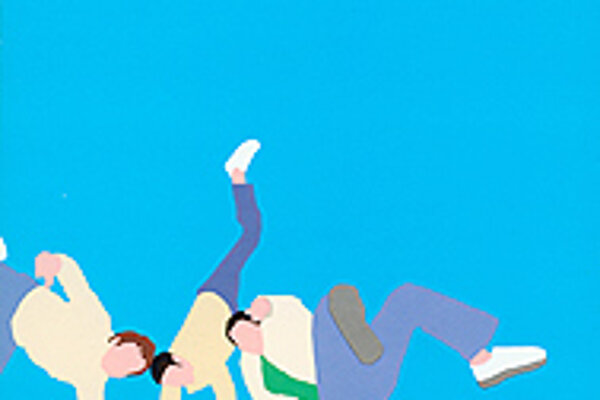 A PUDING Pani Elvisovej (PPE) concert attracts a special mix of fans. Punk mohawks pop up out of the crowd next to the twisted visors of hip hop fans while raver kids dance up front with those types you always find jumping around wildly at indie rock concerts.

The music of PPE falls somewhere in the middle of the musical styles their audience represents. They are something like a disco-techno-indie version of the Beastie Boys who unite all their influences under the flag of pop music.

Yes, this trio uses bass (Viliam), drums (Miloš), keyboard (Pino) and electronics (all three) to make pop music, with all its connotations of disposability and superficiality. But if I must listen to pop's infectious melodies and silly lyrics, I vote ten times over for the PPE album Automati (Automats) over the overproduced tinsel of your standard radio fare.

What is the difference between PPE pop and other pop?

For one thing there is irony and genre self-reference, like in the song majkl džeksn (Michael Jackson), or the fun supermarket-disco melodies of hopa_hopa. More importantly, when PPE strikes a pose it is out of fun, not pretension. They are having a great time and you are welcome to join them.

The album has plenty of faults. The beats and instrumentation, including those on the hit song taneviemčinehej!!!, can sound canned. This is especially clear at the end of the album in the songs 114 mhz and presne tak, where the absence of vocals reveals bland beats and mediocre samples. But there are plenty of redeeming qualities, too. The album is varied, from the dub of dredmix to the punchy, aggressive beat of smažky.

Their voices almost comically nasal, are unique and exciting in their rapid-fire, half-rap delivery. The songs featuring female vocals, especially ďalší level with local pop-star Jana Kirschner, and the ultrapop microhouse of subsong (hudba) with Slivka also make a nice addition (and are in English).

In terms of enhanced material, the album comes with three so-so remixes as MP3s and two entertaining videos.

While the posing in the video for taneviemčinehej!!! almost convinces that these guys bought a box of microwavable pop stardom (precooked, prepare in just one minute!), their endearing, goofy dancing and TV antics in the video for the song pink puding pong confirm without a doubt that this band is real.