ONE VOTE saved the education reform bill from crashing and burning for the fourth time. Having scraped through an initial parliamentary round on March 21, the proposed legislation faces another reading during the next session. 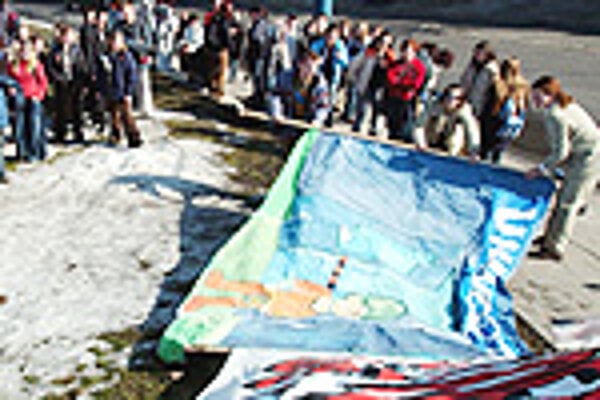 Font size:A-|A+0
ONE VOTE saved the education reform bill from crashing and burning for the fourth time. Having scraped through an initial parliamentary round on March 21, the proposed legislation faces another reading during the next session.

If Education Minister Martin Fronc's bill becomes law, students will have to pay university tuition fees for the first time.

Despite the bill's slim margin of support, the education minister seemed optimistic after the vote. The successful initial passage improves the governing coalition's chances of turning this backbreaking reform into reality.

If the reform bill is finalized as it reads today, universities would start charging students up to Sk26,000 (€689) per academic year starting September 1. However, the bill assumes a two-year transition period, during which time fees would not be obligatory. University administrators would be in charge of specifying the exact fee for their academic institutions.

Currently, the state pays Sk86,000 (€2,226) per year for every student attending university. Fronc's intent with the bill is to have students share the burden of the cost of their higher education.

As part of the bill, Slovak students would be eligible for student loans. The government also promised to approve scholarships for economically disadvantaged students.

"I am glad that there were 73 courageous and responsible deputies," Fronc said after the vote, promising to be open to reasonable revisions to his bill.

Fronc admitted that his draft legislation is not a panacea to all the problems plaguing the education sector, but he said it is part of the cabinet's programme for reform.

According to the education minister, if education reform fails to pass into law this time around, any change to the current system would be blocked for the next five to six years.

Fronc stressed that nothing is for free, not even education.

"It [education] was not free under the Communist regime either, they only led us to believe it was," Fronc said.

Every ruling coalition deputy was present during the vote and supported the bill's passage. Still, they needed the help of four independent deputies to get the bill to the next round of review. Not all opposition party deputies were on hand to vote.

Fronc has confronted several obstacles in his effort to get the reform passed, prematurely withdrawing the draft legislation from the floor several times already when rejection seemed imminent. Just recently, Fronc pulled his bill from the cabinet after the Hungarian Coalition Party (SMK) demanded that money collected from tuition fees be redistributed to students in the form of social and motivational stipends.

Other ruling coalition parties continue to express reservations over the education reform bill, which does not promise smooth passage when the parliament resumes discussions.

"The ANO is preparing change proposals that would guarantee a fair distribution and transparent spending of funds flowing to the schools. We want some guarantees that the funds will add quality to the educational system," Brestenská told The Slovak Spectator.

The ANO objects to the two-year transition period for installing the fees.

"Once we decide that we will charge for education, payment of fees should be obligatory right after adopting the law," Brestenská said.

According to her, the ANO also wants universities to be classified based on European criteria, and accreditations should match these criteria.

The ruling party grumbling loudest over the bill is the SMK. Its Deputy Education Minister László Szigeti argues that such a major reform should not be made in the second half of government, when elections are approaching.

The SMK also wants Minister Fronc to incorporate "an adequate compensation scheme" into the reform to protect access to education by students from impoverished families.

The other deputy education minister, František Tóth, who represents the ANO, has openly challenged his boss, Martin Fronc, suggesting that the ministry had been virtually impotent for the past several years.

"The only thing that's been done is to require theology lessons in the first level of primary school, and that's not enough," Tóth said mid-March.

Students themselves are divided over the prospect of fees. Some are hatching protest plans if the bill goes through parliament.

Jana Sviteková of the Student Council told the daily SME that some "self-declared student leaders are organizing the strike and they are having a negative impact on the development of universities in Slovakia".

March 21 was fortunate for Education Minister Fronc for another reason: he survived a no-confidence motion initiated by the Movement for a Democratic Slovakia (HZDS), which accused Fronc of harming the Slovak education sector.

"We consider Fronc responsible for the cancellation of Slovak schools in South Slovakia and the subsequent opening of Hungarian schools. It is an issue that will remain on the HZDS' agenda," Igor Žvach, an HZDS spokesman, told The Slovak Spectator.

The HZDS is resolute in its opposition to Fronc's bill as well. "The HZDS would not support tuition fees in any form," Žvach said.

The bill's other opposition opponent, Smer, claims that a second reading is bad news for Slovakia.

"The bill does not solve anything as far as the quality of universities is concerned, and it will have a negative impact on the social situation of Slovaks. It also means that young people coming from weaker social backgrounds will have limited access to university education," Robert Madej of the opposition party Smer told The Slovak Spectator.

However, Madej is sceptical that the bill will pass parliament in its second reading. He does not think that amendments will make the bill more acceptable to Smer.

"No matter what changes are made, they can only be cosmetic. The law defines students as customers, with education as the goods. In no way can we support the draft law - it cannot be corrected," Madej said.

Free Forum party boss Zuzana Martináková does not expect the bill to pass through parliament either.

"If I were the education minister, I would very carefully consider what to do with this law since such a big reform should have wider support in the parliament. I am concerned that during the bill's second reading, deputies will want insert numerous changes as a way to improve the quality of education, but this is a facçade. The law itself is very brief. It only refers to the installation of fees and a system of loans. It would be very difficult to make improvements to the law," Martináková told The Slovak Spectator.

(Magdalena Macleod
contributed to the report)