Resolution in sight for KIA plant

LANDOWNERS who refused to sell their land at the government's official evaluation price can now harvest the fruits of their patience.
A long awaited buy out of 56 hectares of land near Žilina started last week. Korean investors have been trying to obtain the land for months to complete the construction of a new Hyundai/ KIA car plant in the region. 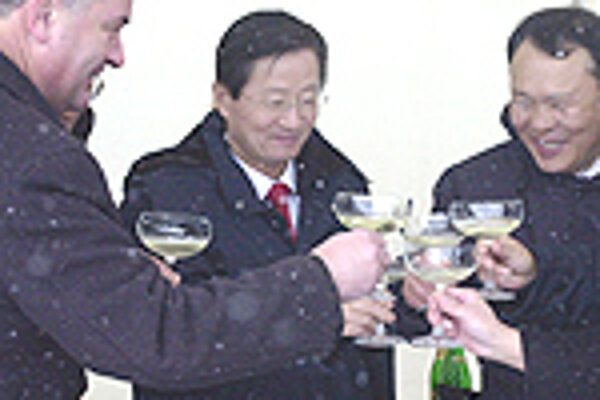 Font size:A-|A+0
LANDOWNERS who refused to sell their land at the government's official evaluation price can now harvest the fruits of their patience.

A long awaited buy out of 56 hectares of land near Žilina started last week. Korean investors have been trying to obtain the land for months to complete the construction of a new Hyundai/ KIA car plant in the region.

The landowners are not selling to the state directly, however. They are signing contracts with three unnamed business people that decided to buy the land at an inflated price in the hopes of exchanging it with land administered by Slovakia's Land Fund.

Currently, state-administered land is difficult to purchase. The investors have a better chance of obtaining state land through a land swap.

There is one more obstacle standing in the way before the deal can be concluded. The government has to officially agree to the investors' land exchange request. To do that, the cabinet has to meet and endorse a decision, which it will do after the Easter holidays. Previously, the economy minister promised to solve the KIA land dispute by mid-March.

Meanwhile, Rusko has decided to involve Agriculture Minister Zsolt Simon. The Economy Ministry forwarded all the documentation of the land exchange to Simon, including an analysis of what the swap would mean for the state.

"In our view, this step [exchange of land] would be the fastest solution, which would solve the problem of obtaining the land near Žilina [for the KIA plant] without any problems" Maroš Havran, the spokesperson for the Economy Ministry, told The Slovak Spectator.

However, Simon shuffled the cards a little when he announced that he had an alternative solution up his sleeve. He does not like the idea of exchanging land. "Exchange contracts can be vague. Therefore, I propose that the cabinet take a more transparent solution," said Simon.

The Slovak Spectator asked Havran if he knew what Simon's proposal might be. He said that he had a good idea, since the cabinet had already met unofficially. But he does not want to specify any details before the cabinet makes an official announcement.

The Slovak Spectator asked Ján Slota, the mayor of Žilina, if he knew what the proposals were. "[Simon's] proposals are so unrealistic that it seems he is prolonging the case artificially. His proposal forwarded last week recommended that the government pay the SK350. If we did that, it would mean the first domino tile would fall. It would have huge consequences, and I think that all pending strategic investment projects would grind to a halt."

Mayor Slota urges the government to make a decision by March 30. "I simply don't understand why the cabinet decided to meet after the holidays. If I was the prime minister, I would call an emergency meeting, even if it was at midnight, straight away!" Slota told The Slovak Spectator.

The Economy Ministry spokesperson, Havran, said the cabinet is very careful and is taking its time. "The cabinet wants to be 100 percent sure that the solution of obtaining the land for the KIA plant is legislatively clean and that there won't be any contradictions today or in the future," he said.

Havran does not see any problems with delays, either. According to him, the issue of buying the land from the unnamed business people and exchanging it for state-administered land are two separate issues.

The lawyer representing the landowners, Marián Kočner, said that the final decision in connection with the land exchange belongs to the cabinet.

"The exchange contract already exists, but it is still not clear which state-administered land the investors are interested in," said Ľudovít Kavjak from the Slovak Land Fund.

The building works of the KIA plant are almost five months behind schedule. Slota can already see the consequences of prolonging the dispute. Three other Korean sub-suppliers have decided to move their operation plants to Trnava Industrial Park.

"The reason [for this decision] is only one, and it is well known to all. It is the result of prolonging the transfer of land from one owner to another. And also, the price of land in Trnava is much lower compared to Žilina," Slota said. He added that Žilina has lost an opportunity to employ another 1,500 people who will now be employed in Trnava.

The building works are continuing on the land that has already been bought out. However, construction has slowed down because of bad weather. Meanwhile, the Korean investors are getting increasingly nervous, as they are anxious to start building on the disputed land.

By the end of January, corporations GovInvest I and II had already purchased 174 hectares of land out of a requisite 230 for the KIA plant. According to investment plans, the building works should be finished by September 2005. Trial production should start the following May. Real production will start January 2007.