We should be there

WHILE the relationships between the United States and Slovakia is meant to be based on shared values, the visa issue creates the impression of division rather than unity, says chargé d'affaires of the US embassy in Slovakia, Scott Thayer. 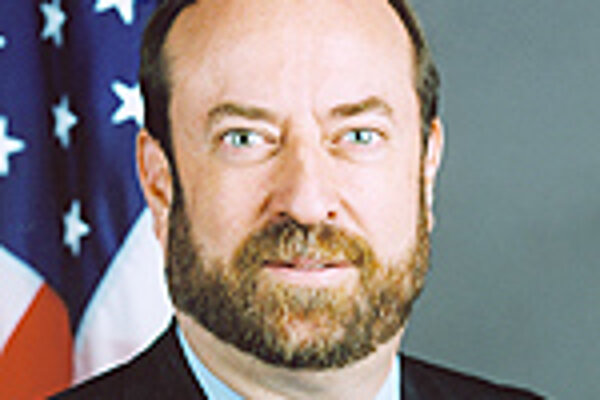 Font size:A-|A+0
WHILE the relationships between the United States and Slovakia is meant to be based on shared values, the visa issue creates the impression of division rather than unity, says chargé d'affaires of the US embassy in Slovakia, Scott Thayer. In an interview with The Slovak Spectator, Thayer, who has been in the "business" for 25 years, says that the visa issue is a very big deal everywhere and that things in Slovakia are actually much better than elsewhere.

The Slovak Spectator: The American Chamber of Commerce in Germany and the Boston Consulting Group have conducted a survey indicating that US businesses consider Eastern Europe a key destination for their investments. What in your opinion makes this region so interesting to US business?

Scott Thayer (ST):There are several things that make the region interesting, and they all come together in Slovakia. First comes Slovakia's membership in the European Union and having access to that wider market, and second comes the successful economic leadership of the country.

Foreign business people, including Americans, have been successful in Slovakia. It really comes down to two major factors. The first is the work force. Time after time business leaders tell me that the Slovaks are honest, well trained and hard working. Actually, not only well trained but also trainable, thanks to their high level of education.

Also, labour costs in Slovakia are much lower than in western European countries. While that will not be true forever, companies are able to calculate over time when making business decisions, and they will still be able to make money here.

The other factor is of course the 19 percent flat tax, which simplifies a tremendously complex process.

TSS: Are there any legislative or other barriers left for US investors in Slovakia?

ST: There are no legal or regulatory obstacles to US business or any foreign investments coming to Slovakia. There are of course some smaller issues that we do talk through with the government, which we desire to see progress on: the question of residency permits, both getting them and renewing them. There has been some progress on that but not as much as we would like. Not only for business people, but teachers and people from other countries outside the European Union (EU).

TSS: Has the country's entry into the European Union modified the relations between Slovakia and the US? How important is Slovakia to the United States' foreign policy?

ST: Slovakia's entry to the EU and NATO has formed the relationship between our two countries. The goal to reach these memberships has shaped the decisions that we have made, exchange programmes and legislative initiatives we have started. Every single decision of the country prior to May 1 last year was viewed through the prism of those two memberships.

Now that Slovakia is a member of the most exclusive clubs in the world, with which the US has the most intense and productive relationship, we consult and collaborate on an incredible spectrum of issues. It also means that Slovakia is automatically influential in a way bigger countries are.

I think it is very popular to talk about transformation, but I really think that NATO and EU membership have transformed Slovak-US relations.

TSS: For Slovaks the visa issue continues to dominate their view of Slovak-US relationships. During his visit, President Bush said the US would offer a road map for Slovaks that would lead to the eventual cancellation of visas. Could you explain what this "road map" means?

ST: The visa issue is a very important one, because it reflects how Slovaks view the USA.

While our relationship is meant to be based on shared values, matters like the visa issue create the impression of a schism, of division rather than unity.

I have been in this business for 25 years and the visa issue is a very big deal everywhere. Things in Slovakia are actually much better than in other places, which is not very comforting to the Slovaks, I know.

Also, the true situation is not really what the public perceives it to be. Many people claim to have personal knowledge - "My brother, my cousin, my neighbour, sister, came for a visa and this horrible thing happened."

But there have been significant changes to the process over the past couple of years. In the two-and-a-half years I have been here we have made a lot of significant changes for the better. People should be treated with respect and there is no reason to make them go through a painful process since we can accommodate them in a respectful and professional way.

When I came here, there were 50 or 60 people lined up outside in the street every morning at seven in the morning, rain, snow or heat - it did not matter. It was a very physically uncomfortable process. We have gotten rid of that. The only people you will see lined up are the people who have an interview in the next 20 minutes. People can choose on the Internet when they want to come, usually within a week. Although only about 43 percent of Slovaks have personal computers and Internet access, 80 percent of our applications are made online.

We try to make sure that the interview process itself is very respectful, swift, and that passports are returned between 20 and 30 minutes after the interview. The entire process is completed in about one hour.

Obviously, entering the EU creates expectations, which are not unreasonable. I well understand the perspective of Slovaks standing on Hviezdoslavovo square [location of the US Embassy] saying that if the relationship between the US and Slovakia is strong enough that Slovaks and Americans are deployed side-by-side in Iraq and Afghanistan why cannot they be deployed side-by-side in New York City?

In order to qualify for the visa waiver programme that the USA has with 27 states, the rate of refusals needs to be 3 percent or less. That is the threshold condition. Then there is the passport security and the requirements of the biometric features along with the judgment that Slovakia is cooperating with the USA on international legal issues.

The refusal rate reflects lots of different factors: one of the things is the historical experience with people from different countries travelling to the United States and not returning. That is called the overstay rate. Given the pre-1989 circumstances and the economic conditions since 1989, unsurprisingly the overstay rate of Slovaks was viewed as quite high.

Based on the road map, we are going to look again at the overstay rate. First of all, we are going to subtract out the question of overstay prior to 1989 because frankly those overstays were motivated as much by politics as by economics. The second alignment is to do a new statistical survey to gauge a more up-to-date idea of what the overstay rate is. Slovaks have much greater access to employment opportunities and investment opportunities in Europe itself than they enjoyed in the past. Their incentive to go to the United States and stay there is greatly reduced. It will take one more year or so.

We want to look at it for the year 2005, which will be the first full year of Slovak European Union membership, and see how that plays back.

There are a couple of other things in the road map that we have offered to the Slovak government and other countries. They have to commit to the biometric features of the passport. The governments would commit themselves to a campaign that would encourage Slovak citizens to come back after their legal stay. Which actually is in the interest of Slovakia anyway.

TSS: How do you evaluate US President George Bush's visit to Slovakia. What has it brought to Slovakia apart from putting the country on the map?

ST: The president's goal was the validation and appreciation of the reform process here in Slovakia and the recognition of the progress that Slovakia has made. Lots of people quoted Madeleine Albright's famous statement that Slovakia was the black hole of Europe. No one believes that anymore. There is sometimes a tendency to feel a certain inferiority because of being a small nation.

But Slovakia is a sovereign nation and this is what the president wanted to convey. He came because he wanted to come. He was fully in charge of the visit and he knew what he wanted to get out of it. He was very happy to visit the country. Based on what I heard from people, Slovaks were very happy to have him here.

It was an overwhelmingly positive visit.

Before the president came the number one question I was asked was: why is he coming to Bratislava? It was always expressed in this self-deprecating way. He came because he wanted to come and he wanted to recognize this progress. Slovaks often undervalue their own place in the world. There is so much for this country to be really proud of. Slovaks should wear T-shits wherever they go and demonstrate pride in being.

TSS: How in your opinion did Slovakia handle the role of host country? What were the instant reactions of the White House to the visit?

ST: This was a very complicated visit. Just to prepare the speech on the square, the White House was very pleased by the professionalism, by the can-do attitude that they saw in the Slovaks. They did some spectacular things for the speech and the press conference by using Slovak resources. The president was very pleased with the welcome. He was energized and enthusiastic to be here.

TSS: Has the visit the potential to inspire some new US investments in Slovakia?

ST: There are two answers to this question. The first answer is no. Many countries have a very close state-business relationship and when senior government officials make overseas visits they typically bring with them a group of business people to talk about deals. We do not typically do that.

However, our commercial office has gotten phone calls from the US saying, "I saw the president's visit to Slovakia. I think I should invest there." The visibility prompted the call of that person, who said "I should be in Slovakia."