A MONTH after US First Lady Laura Bush visited the renovated University Library in Bratislava's historical district to inaugurate InfoUSA, library staff are busy preparing for April 19. That is the day when Bratislava's central library - in addition to the new American information centre - will open its doors to the public. 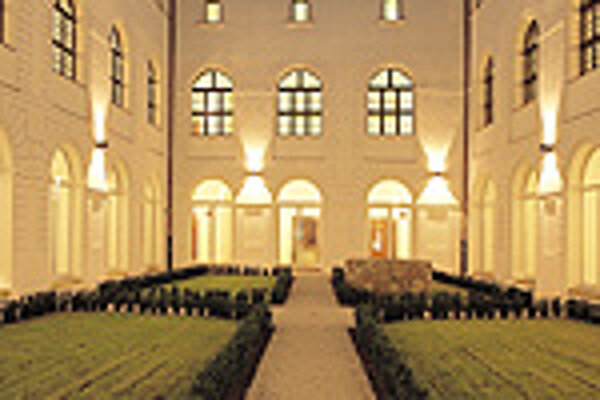 A MONTH after US First Lady Laura Bush visited the renovated University Library in Bratislava's historical district to inaugurate InfoUSA, library staff are busy preparing for April 19. That is the day when Bratislava's central library - in addition to the new American information centre - will open its doors to the public.

"It is natural that interest in InfoUSA will be high. The resources provided by the centre will have tremendous impact from a scientific, political, economic and social point of view," Trgiňa told The Slovak Spectator.

According to the director, visitors to InfoUSA centres will be able to access a range of information, from basic facts about the US to specific scientific data. "The centre will make such information accessible to a wide scale of users," he said.

InfoUSA effectively replaces the former American Studies Centre that was established in the University Library in 1997. InfoUSA is expected to enhance the library's collection and increase the quality of resources.

Barbara Zigli is the public affairs officer at the US Embassy in Bratislava, which helped fund InfoUSA. "We are honoured and pleased to be part of such a distinguished, historic and professional institution as the University Library. The beautifully renovated building provides a perfect setting for the library's programme of hosting international collections, including InfoUSA," she said.

Apart from books, documents, CDs and DVDs, InfoUSA visitors will be able to access Web-based information databases that cannot be gotten to from elsewhere.

Trgiňa says the aim of such international centres within the University Library is to offer patrons quick access to relevant information.

In the case of InfoUSA, users can "get information, for example, on leading public officials in Alabama. Or they can research study opportunities in California in specific fields, let's say, geo-biology", the director said.

Trgiňa thinks InfoUSA will mostly attract students, people studying English and locals planning a trip to the US.

He expects scientists will also gravitate to the centre. "Previously this group had very limited access to information on the various science disciplines in the US. The centre might be helpful in this," said Trgiňa.

Founders of InfoUSA established the centres with the vision of facilitating cultural exchange. "In addition to its wealth of information about the United States, InfoUSA includes space for informational and cultural programmes, which will promote interaction between Slovaks and Americans," Zigli said. To this end, InfoUSA will host relevant exhibitions, forums and other such gatherings.

InfoUSA will be open to all University Library patrons. However, the centre is not a lending library.

"The interest will be bigger than what we have on offer, which is why we invite visitors to use the sources within the library premises. Only in special cases will it be possible to allow short-term borrowing, and only to registered patrons," Trgiňa said.

InfoUSA in Bratislava is the result of cooperation between the US Embassy and the University Library.

"Under a Memorandum of Understanding signed earlier this year, the US Embassy recently provided new information materials, beginning with a donation of core materials valued at $15,000 covering such topics as US history, political science, literature, art, and English language teaching. This is in addition to a previous US Embassy donation of 2,700 books. We also provided multimedia equipment worth $9,000, to be upgraded soon with an additional multi-system projector. The Embassy is also committed to providing further upgrades in the future, as well as training and consultation for University Library staff working in the InfoUSA centre," Zigli explained.

Trgiňa is excited about the collection. "I have to say that the spectrum of information in InfoUSA also impressed my American colleagues. The book collections are a part of the University Library and will be continually updated."

Trgiňa and Zigli both reminisced about the ceremonial opening of the centre by Laura Bush during the summit meeting between George Bush and Vladimir Putin at the end of February this year.

Trgiňa respects the fact that the First Lady's programme included a stop at the University Library. The director sees her visit as an expression of acknowledgement and encouragement of librarians' work.

"We perceived her words not only as words of the US president's wife but also words of a librarian - a woman that knows the meaning of cultural connection through information. Slovak librarians thus do not see Laura Bush as just the First Lady but also the 'first librarian'. Her visit made visible not only our library but also the whole Slovak librarianship. Such an acknowledgement gives a spirit and it came right in time," said Trgiňa.

According to Zigli: "We could not have imagined a more distinguished envoy than Laura Bush to inaugurate the InfoUSA centre in Bratislava. A former librarian herself, she passionately believes in and supports the development of libraries and works constantly to instil in young people a love for reading."

Zigli says the University Library was Laura Bush's first stop during her day of visits in Bratislava. She chose the library because of its distinguished history, bright future and importance as an institution that promotes learning and mutual understanding.

"Her remarks in support of libraries drew a very positive response from Slovak librarians, and we note with pleasure that a deeper discussion is already underway about the important role of librarians in Slovak society," Zigli added.

There are two InfoUSA centres in Slovakia. In 2004, the first was established in Košice's State Science Library.

Apart from InfoUSA, the University Library has laid the foundation stone for a Russian Studies Centre. Along with a collection of books in Russian, visitors will be able to access Web-based Russian databases as well.

The University Library is also in talks with the French Embassy in Slovakia to establish a similar "national corner". "We are prepared to widen our collection with offers from other countries as well," Trgiňa said.

The director is looking forward to the opening. "We invite everyone," he concluded.