EVEN though it may sound strange, Bratislava's notorious "concrete jungle" - Petržalka - is home to some virtually untouched national treasures. One of them - Starý Háj - is situated just behind the Communist-era paneláky apartment blocks. 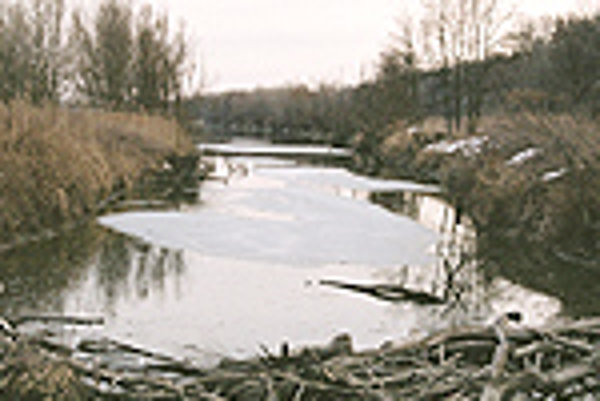 EVEN though it may sound strange, Bratislava's notorious "concrete jungle" - Petržalka - is home to some virtually untouched national treasures. One of them - Starý Háj - is situated just behind the Communist-era paneláky apartment blocks.

To preserve the habitat of its native wildlife "citizens" for future generations, Starý Háj was declared a nature reserve deserving of the highest, fifth, degree of protection. A boundary post was ceremonially erected March 14, two wekks afer the March 1 announcement.

hectare island. It is part of the Danube floodplain forest, located in the former inland delta of the river. These

forests cover only a narrow strip along the river and comprise just fragments of the original area.

The island is home to a number of rare and protected animals and plants. Bite marks on trees prove the presence

of the European beaver (castor fiber). The biggest beetle living in Slovakia, the stag beetle (lucanus cervus), has

found living conditions here suitable as well. Other wildlife species that have taken up residence include frogs and salamanders, more than 100 kinds of birds and several species of bats.

Starý Háj is a natural area of soft floodplain forests perfect for willow and poplar trees, which are nowadays rare

and considerably endangered. For this reason the area has been included in the proposed Bratislavské Luhy site,

to be part of NATURA 2000, a network of protected European ecological sites.

"Only very few such forests can be found in Europe," said Tomáš Kušík, chairman of the Regional Association for Nature Conservation and Sustainable Development, which is active in the project.

Natura 2000 is a network of nature conservation areas to be protected under European Union law. Only areas deemed important to the whole EU are included in it.

One year ago, the state forest company started logging trees there, but after an initiative by nature protectionists the practice was halted. The practice of cutting down trees and replacing them with quickly growing cultivated species is only good for feeding paper mills.

After an agreement with the Bratislava city council, which did not agree to such strict protection, Starý Háj remains open for the public within the so-called soft tourist industry. This means that people can move on already existing paths and take picnics on the meadow. However, no buildings can be erected here.

Starý Háj is the second site declared a protected area in the Bratislava region in a relatively short time. One year ago the protection of the Chorvátske Rameno site, also in Petržalka, was elevated to the fourth degree of protection.

"In the near future we will attend to Slovanský Ostrov, an island in the Danube River located below Devín Castle," said Peter Krempaský, the director of the Regional Administration of Protection of Nature and Country.

Drienkový Les, close to Rusovce, which is also part of the Danube floodplain forests, is another candidate for

having its degree of protection increased. The main danger is residential housing and unrestrained tourism. There are also plans to build a golf course there.

To get to Starý Háj, take bus number 83, 84 or 88. Get off on the last stop of Ovsište. The reservation spreads behind Dolnozemská cesta. At the moment thousands of flowering snowdrops can be seen. But remember - just look, don't touch!