THE FIRST white stork of the year in Slovakia was spotted on March 15, returning home from its winter holidays. Peter Pajtáš, a teacher at the local school in Vlkanová, close to Banská Bystrica, reported the arrival of the graceful bird to the Slovak Association for Protection of Birds (SOVS). 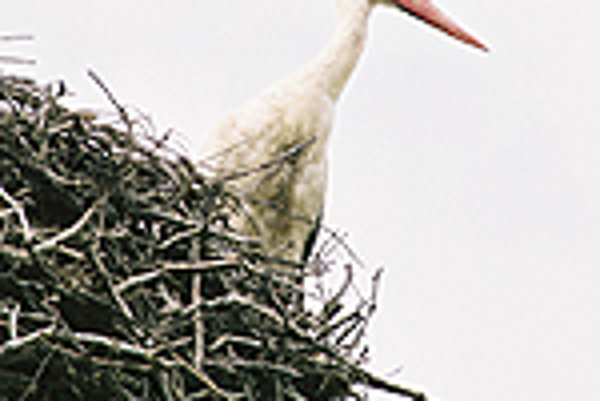 THE FIRST white stork of the year in Slovakia was spotted on March 15, returning home from its winter holidays. Peter Pajtáš, a teacher at the local school in Vlkanová, close to Banská Bystrica, reported the arrival of the graceful bird to the Slovak Association for Protection of Birds (SOVS).

He spotted it perched aloft the school's chimney, on which the storks have nested for many years. There was still a lot of snow around Vlkanová but due to the early spring sun it had partially thawed. Conservationists had no fear the big bird would go hungry.

"Usually the spring migration of storks on our territory starts after March 20. The early date of March 15 surprised us. We expected them even later this year since the winter has been very long," said Martin Sárossy of SOVS.

Shortly after, the arrival of other birds was reported, mostly in Slovakia's southern regions.

Slovak storks spend the winter in Central and Southern Africa. The 10,000-kilometre journey back to Slovakia takes them about 50 days. The birds travel between 218 and 288 kilometres per day, at an altitude between 500 and 2,000 metres. The speeds they fly at range between 28.4 and 61.3 kilometres per hour. Numerous flocks of

storks cross Slovakia and land in Poland where there are an estimated 40,000 stork nests.

Slovakia is home to about 2,800 storks, of which the largest number live in the eastern part of the country. This

is less than one percent of the more than 160,000 pairs of storks living around the globe. The importance of the Slovak stork population lies in the fact that it is located in the centre of migration paths.

The last storks are expected to arrive in Slovakia in late May. Usually the male stork arrives first, tends the nest and waits for the female partner to conceive. They have one to five chicks.

The organization encourages the public to monitor storks. People can send in their own monitoring experiences to SOVS, either by phoning 02/5542-2186 or 0905/256-184, or writing to sovs@sovs.sk. The most important information is the arrival and departure dates of the storks and the number of stork chicks. Photos are useful as well, either for documenting the nests or for entry into a stork "gallery".

Last year, public interest was high and around 200 people outside SOVS sent information about storks to the database. This year SOVS is trying to find a permanent observer for each nest. "This should be someone who lives nearby and is interested in regularly monitoring the nest," added Sárossy.

The organization wants to map all stork nests in the country and photograph them. People from counterpart organizations in Spain plan to attend the stork 2005 "census" in Slovakia.

The stork population in Slovakia has shrunk over the last century due to intensive farming, the drying up of wetlands, changes in the structure of villages and the industrialization of the countryside.

At the end of the 20th century the number of storks in Slovakia stabilized at about 1,350 pairs. This gives hope that the country will not suffer the fate of Denmark and The Netherlands, where the number of storks has been dramatically reduced. With their red beaks and distinctive black and white plumage the disappearance of these beautiful birds would be a tragedy.

Since white storks have gotten used to settling directly in, or close to, settlements, it is quite easy to observe them. Probably the most exciting experience is to watch the graceful courtship dances accompanied by the typical clapping of their beaks at the end of April or the start of May.

Another spectacle takes place at the end of July or in early August when young birds learn to fly.

At that time it is possible to see huge flocks of these symbols of new life wheeling round and preparing their muscles for the long trip to their distant winter resorts.