"WHEREVER I die, my corpse is to be brought to Bojnice and buried in a simple black robe in the crypt directly beneath the main altar of the castle."
Such was Count Ján František Pálffy's wish in 1889. Over the following 22 years he set about having the whole castle, not just the crypt, rebuilt. By the time the Romantic neo-gothic reconstruction of Bojnice was completed, the count was dead. 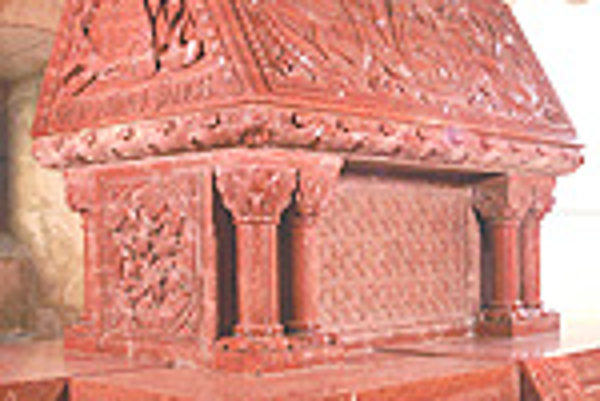 Font size:A-|A+0
"WHEREVER I die, my corpse is to be brought to Bojnice and buried in a simple black robe in the crypt directly beneath the main altar of the castle."

Such was Count Ján František Pálffy's wish in 1889. Over the following 22 years he set about having the whole castle, not just the crypt, rebuilt. By the time the Romantic neo-gothic reconstruction of Bojnice was completed, the count was dead.

Count Pálffy died on July 2, 1908 in his palace in Vienna. Everyone who knew him, knew about his wish to be buried in his beloved Bojnice, and it was seen to immediately.

The castle administrator and executor of the Count's will Koderle ordered four sarcophagi from Austrian stonemason Leopold Sieber to furnish the family crypt.

The sarcophagi are made from red marble from the quarry in the Austrian village of Adnet. The central sarcophagus is made in neo-Romanesque style and designed by the Gebrüder Colli (Colli Brothers) from Innsbruck. The brothers had already produced a large variety of handcrafted products for the count during his lifetime.

It took two years to make, transport and install the sarcophagi. It was not until 1912, four years after his death, that Count Pálffy's remains were placed into the central sarcophagus and he could, it seemed, rest in peace.

The Pálffy heirs, however, wanted to sell the castle and go against the count's expressed wish of turning Bojnice into a museum.

Although they did not succeed in selling the whole building, the inheritors started putting the works of art that Count Pálffy had collected over the years up for auction.

Prior to World War II, in 1938, the castle was bought by Ján Baťa, a businessman, and after the war it became the property of the state and was turned into a museum.

The seeming atmosphere of repose that now surrounds the castle is perhaps an illusion. From time to time, reports of "strange goings on" are made. The most recent peculiarity involves the sarcophagus.

In 1990 a disagreeable odour was noticed coming from the crypt. Investigations traced the source to a brown honey-like liquid dripping through Count Pálffy's sarcophagus.

The crypt was immediately closed to visitors and a sample of the strange solution was sent for analysis by chemists, hygienists and pathologists. On examination, no disease-ridden organisms or toxic substances were detected.

However, even though the solution was deemed harmless, the analysis showed that it contained the mineralized remains of a human body.

At the same time an archival investigation revealed that following an autopsy the count's corpse had been injected with five litres of glycerine.

There followed an analysis of the sarcophagus to try and find out exactly how and why the sticky solution could have leaked. Investigators contacted the Sieber company that had made it but could not shed light on the case.

There were no records in the company's archive from before World War II. A mine detector was brought in to determine the exact outlines of the sarcophagus. Next, ultrasound techniques were used to measure the precise thickness of the marble.

A breakthrough was made on September 25, 1992. A mini camera - an endoscope - was lowered through the lid and colour pictures were broadcast from the interior of the sarcophagus. The inside was intact - the wooden coffin in which the count had been originally interred was set on two iron beams fixed into the thick ends of the sarcophagus.

The iron had gradually eroded and damaged the bottom of the coffin. The position of the coffin, two sealed bundles under the coffin and other details captured the public's imagination. Several mediums speculated about "Count Pálffy's tears".

Bojnice museum experts, led by the director of the Slovak National Musuem Bojnice, Ján Papco, met on October 26, 1993 to decide what to do about the sarcophagus. After weighing the historical and technical evidence and considering the ethical implications, they decided against exhuming the count's remains.