The Slovak pieta in the vineyard

ON A COLD winter morning, like almost every morning for the past year, artist Viliam Loviška is outside in a makeshift studio he has constructed in his suburban Modra vineyard. There he puts the finishing touches on a sculpture he is carving from 4,000 kilos of Bulgarian marble. He is making a pieta for a Bratislava church, and the pressure is on. The project must be finished Easter week. 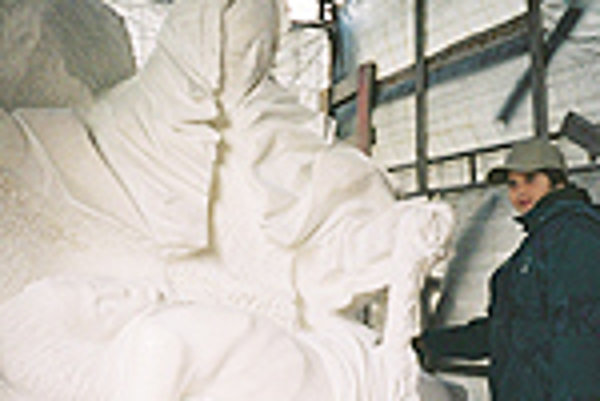 ON A COLD winter morning, like almost every morning for the past year, artist Viliam Loviška is outside in a makeshift studio he has constructed in his suburban Modra vineyard. There he puts the finishing touches on a sculpture he is carving from 4,000 kilos of Bulgarian marble. He is making a pieta for a Bratislava church, and the pressure is on. The project must be finished Easter week.

For a year, Loviška has endured the elements, working 12 to 14 hours a day. Winter has been especially difficult with temperatures as low as -15 Celsius degrees.

Today is warmer. But the wind cuts through the plastic and burlap that forms his temporary workspace. Friends have joined him, keeping him company, sharing coffee and cigarettes - perhaps some brandy - each one taking a turn at the final polishing of the work.

"I like that the lives of my friends and family have become part of the life of the stone," Loviška says.

His wife, Marcela Lovišková, is an artist, too. They collaborate on many projects, including this one.

"She is my co-author," Loviška explains.

A pieta is a work of art depicting the Virgin Mary holding and mourning over the body of the dead Christ. It is an Italian word meaning pity, compassion, or sorrow.

Loviška's pieta is interesting because it combines old and new, eastern and western symbols. It is a hopeful work. He has created a uniquely Slovak piece, a concrete expression of Slovakia's place in Europe, in religion, and in modern politics.

The pieta concept does not exist in Byzantine art. But Loviška incorporates Eastern Orthodox and other non-traditional principles into his sculpture.

Mary extends her arms in an Eastern Orthodox gesture of blessing. She, not Christ, is posed for crucifixion. Christ's hands are hidden. His beard is rendered like a Grecian statue, blending Hellenic and Judaic images.

Loviška's Mary is a Jewish woman, but with distinctly Slavic features. She wears the traditional head covering of married Slovak women.

Nor does his Christ wear the crown of thorns, but has a flowing mane of hair. His hair is his halo, but also curly like lamb's fleece. The thorns are found only in the roses in Mary's left hand that symbolize the Bratislava suburb, Ružinov or Rose Town, where the sculpture found a permanent home on March 24.

Christ has no visible stigmata. But many small holes drilled into the marble around his body appear strongly ossiferous.

Loviška, who also designed the interior of the Ružinov church, based that design on what he calls "a dialogue between East and West".

Fabric flows over Mary's head and shoulders, then parts and leads the viewer into her heart. "Here I wanted Mary's fluid fabric to evoke East and West coming together," Loviška explains. "It is also the Danube River valley."

In the statue's base the marble clearly resembles small plots of farmland as viewed from the air. Slovak double crosses adorn the right side.

Loviška smiles. "It is the body of Slovakia."

Illustrating his country's symbols is not new to him. He created the renovated Coronation Mound by the Danube in Bratislava, where Slovakia celebrated entering the European Union in 2004. He hoped to invite Presidents Bush and Putin to visit the Ružinov church. He creates beautiful bowls and goblets from golden Slovak onyx and proposed that three bowls, filled with Slovak soil, be presented to Presidents Bush, Putin and Gašparovič on the occasion of the summit, but the idea was quashed because of security issues.

"It didn't happen," he concluded, "but we put the idea out there."

His pieta has left the Modra vineyard. The Ružinov church of St Vincent de Paul on Seberíniho street was expecting record crowds as the congregation welcomes the statue to its new home not far from a marble altar Loviška created.