THE POLISH town of Krosno has a long tradition of linen weaving. No wonder, because Krosno means "loom".
Now the present is coming face to face with the past. The result is an international competition that has added a new dimension to the traditional craft of weaving - an artistic view from the 21st century. 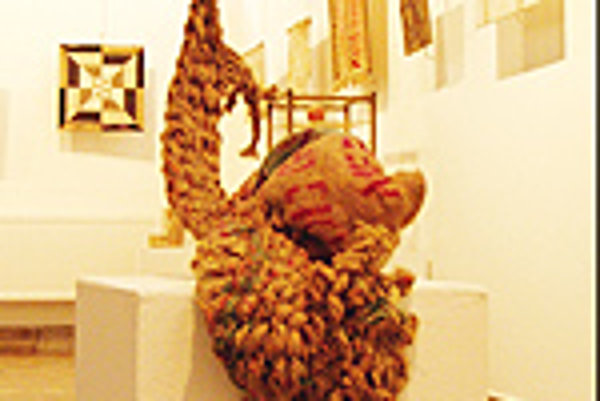 Font size:A-|A+0
THE POLISH town of Krosno has a long tradition of linen weaving. No wonder, because Krosno means "loom".

Now the present is coming face to face with the past. The result is an international competition that has added a new dimension to the traditional craft of weaving - an artistic view from the 21st century.

The exhibition, entitled Z Krosna do krosna (From Loom to Loom), takes place in Krosno every two years. The result of the third, 2004 biennial competition is now on display in Slovakia. Visitors to the Šariš Gallery in Prešov can admire the exhibited works until April 24.

"This is the first time we have hosted this exhibition," says Marta Hrebíčková, of the Prešov gallery.

She was a member of the third competition's jury and the results impressed her so much that she decided to bring the exhibition to Prešov. The 2002 exhibition was presented at the Museum of Ukrainian and Ruthenian Culture, in Svidník, where the only Slovak artist participating in the Polish competition, Anna Boršovská-Němcová, lives.

"I thought the exhibition could be interesting for the gallery visitors and inspire Slovak artists working in textiles to increase their representation in this interesting project."

Altogether 89 artists from 21 countries participated in the third biennial competition. They were mostly local Polish participants, but also Czech, Canadian, Ukrainian, Finnish, Japanese and Icelandic. Boršovská-Němcová from Slovakia joined in with her three-dimensional work woven around a wire construction. Entitled In Bloom, it symbolizes an opening flower. The exhibition shows the various designs and techniques the artists used when working with the linen fabric. As a natural material, the linen inspired some to employ images from nature. Others formed figurative motifs, and some invented abstract works inspired by geometry or pop art styles.

"There are classical weaving techniques used, as well as needlework, batik and macramé styles, and even plastic 3-D works," Hrebíčková says.

The conditions for the competition are that the work is made 75 percent of linen, that a weaving technique is applied and that the result measures no more than 60 by 60 centimetres.

According to Hrebíčková, linen is a natural material with a long tradition that is currently experiencing a "renaissance". This is evident in the fashion industry as well as the general textile industry. The reason that artists are interested in linen today, thinks Hrebíčková, is that it is part of the global trend towards a return to nature and its materials.

"Linen is an undemanding, versatile plant. For example, special linen paper is used in restoration processes; artistically one can work with the plants, seeds and fibres in various phases and forms of the 'life' of a linen," she said.

"Linen is a material with 1000 years of history but also a present and a future."