The limits of provocation

CZECH television and stage director Jiří Nekvasil must have known that an untraditional staging of Antonín Dvořák's penultimate opera, Rusalka, would stir emotions. Dvořák is a cultural icon, whose works have been treasured for their fin-de-siecle Romanticism and distinctly Bohemian harmonic colours. 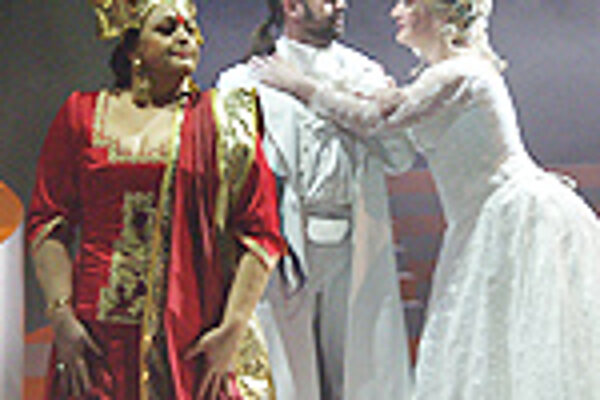 CZECH television and stage director Jiří Nekvasil must have known that an untraditional staging of Antonín Dvořák's penultimate opera, Rusalka, would stir emotions. Dvořák is a cultural icon, whose works have been treasured for their fin-de-siecle Romanticism and distinctly Bohemian harmonic colours. Furthermore, the opera's libretto, a lyric fairy tale influenced by literary works such as Kytice, a collection of ballads by renowned Czech poet Karel Jaromír Erben, places it even closer to the Czechoslovak heart.

But "untraditional" is perhaps too mild a description for staging in which the Prince stalks Rusalka with a hand-held video camera, the third act take place on a garbage-strewn landfill, and the wood nymphs, so playful and energetic at the beginning of the opera, end up strolling that landfill as drug-addicted hippies. This interpretation could be viewed as tasteless and disrespectful, but, in an interview with fellow National Theatre in Prague director Pavol Smolík, Nekvasil justified it as "an ambition to tell the story in the language of today's world with experiences from present-day life."

So what are the limits to updating a classic? Fortunately, Nekvasil's vision, albeit unorthodox, remains dramatically connected and serves as fascinating insight into the characters' psychological development.

The opera tells the story of Rusalka, a wood nymph who lives at a lake with Vodník, the water goblin of Slovak fairy tales, witches, and other wood nymphs. Rusalka longs to be human because she has fallen in love with a prince, so she seeks the help of a witch, who grants her wish, but leaves her mute. When the Prince visits the lake later that evening, he falls in love with Rusalka and takes her to his castle.

The Slovak National Theatre (SND) Orchestra, led by Jaroslav Kyzlink, embraced this symphonic score with purity and fullness on March 19, evoking the setting and even the bluish-green colours of the lake. Iveta Matyašová (Rusalka) made an early impact with her smooth transitions from light to heavy sound, but wisely chose to save her voice's dramatic side for later. Ľudovít Ludha (Prince) showed his usual brightness and vocal agility. Denisa Hamarová (Witch) displayed contralto-like thickness throughout her range, which emphasized the darker sides of the role. Gustáv Beláček (Vodník) was resonant, but came across as too young to have the necessary authority.

And it was here that the Prince filmed Rusalka with a video camera, a symbol of emotional distance that seemed in direct contradiction to the libretto. The audience's displeasure was audible, but an artistic vision, admittedly, deserves the benefit of the doubt.

In Act II, the castle Kitchen Boy and Hunter gossip about the Prince's silent bride. The Prince has apparently become suspicious of her, so a Foreign Princess enters the picture and lures him away. Vodník appears and curses the Prince as he takes Rusalka back to the lake.

Ľubica Rybárska's (Foreign Princess) powerful, multi-dimensional voice and patrician deportment fully suited the character, and her nefarious facial expressions were involving. Jana Valášková (Kitchen Boy) was accurately hyperactive and mischevious in her imitation of a young boy, with confident tones, but too much vibrato. Ján Ďurčo (Hunter) was clear and precise, and his strong personality complemented Valášková's.

Once again, the Prince used a video camera and the symbolism behind it remained unclear. Nekvasil's next section of restaging, though, sparked a revelation. During Act II's orchestral interlude, dancing couples appeared and encircled Rusalka as they performed a set of elegant, passionate pas de deux. This was a clearly a visualization of Rusalka's inner longing for the Prince, and a hint that everything in the opera might be a symbolic externalization of the characters' psychology.

In Act III, Rusalka is back at the lake, mad and desperate from having been rejected. She could return to being a water nymph, but the witch would require the Prince's blood as a sacrifice. Rusalka refuses. The Prince arrives and implores Rusalka to return to him, crying that he has become soulless and emotionally crippled without her. Rusalka knows that showing love would doom him, but can't resist, and kisses him. The Prince dies by her side as she sings into the night.

Both of the lead singers expanded their ranges and intensity in the third act to express their characters' increasingly desperate psychological state. Matyašová opened wide and finally projected the full breadth of her impressive sound. Ludha was now free to do the same and his unique timbre echoed through the theatre, his voice floating lightly onto higher notes and swelling straight through the vocal line. Hamarová increased the intensity as well, chewing through her diction and moving with feline cunning.

But the staging once again grabbed the attention. Audience members grumbled and whispered at the appearance of an abandoned car and empty Coca-Cola bottles on the stage, but when taken in context, as an externalization of Rusalka and the Prince's internal mindset, it made sense. The lake and the people who resided in it, once so beautiful and bright, were now dark and empty of meaning, just as the rejection and emotional distance had made Rusalka and the Prince feel.

Untraditional artistic interpretation may not always be agreeable, but, when dramatically connected to the work, deserves credit for being provocative.