THE CABINET agreed to forego discussing important constitutional revisions that would limit MP criminal immunity and increase the power of the Supreme Audit Office. The issue has been passed on to the senior political ruling body, the Coalition Board. 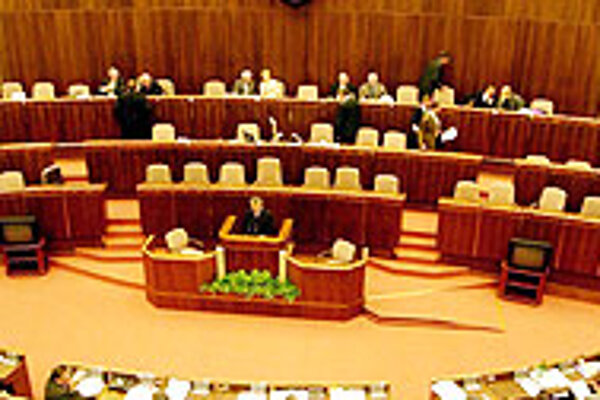 Font size:A-|A+0
THE CABINET agreed to forego discussing important constitutional revisions that would limit MP criminal immunity and increase the power of the Supreme Audit Office. The issue has been passed on to the senior political ruling body, the Coalition Board.

The cabinet's move to shift the burden of responsibility to the Coalition Board at its March 30 session was proposed by Pál Csáky of the Hungarian Coalition Party (SMK). Csáky argued that the revisions lacked critical cabinet support.

In order to revise constitutional law, as many as 90 MPs must vote in favour of the proposal. The ruling coalition currently has 68 MPs, not all of which are assured votes.

Justice Minister Daniel Lipšic submitted the revisions. He says that the changes are in line with the cabinet's reformist programme.

"All [coalition] MPs voted for the cabinet's programme so I don't expect the coalition parties to object," Lipšic said.

Csáky insists, however, that before the revisions go to parliament, the ruling coalition should find the necessary political backing for passage.

"We currently do not have enough votes [to approve the revisions] in parliament. I proposed that we discuss this issue on the political level first and test the chance for passage. We cannot play politics just to make our opinions visible. We must practice realistic politics," Csáky told journalists after the March 30 cabinet meeting.

Zsolt Komlósy, the chairman of the SMK's Republican Council, a senior party body, told The Slovak Spectator March 31 that "a radical narrowing of MP immunity is not in place because there are fears that it might be used against some MPs".

Komlósy complains that Minister Lipšic's proposal addresses MP immunity only within a parliamentary capacity. "We should discuss the details of this proposal, because I think that an MP acts as an MP outside the parliamentary premises as well," Komlósy said.

Lipšic proposed similar changes last year but both coalition and opposition MPs rejected them in parliament. In addition to limiting MP immunity, Lipšic wants to broaden the reach of the Supreme Audit Office, giving it control over the handling of municipal incomes.

Several MPs who are also mayors are against - or at least cautious of - extending the audit office's competencies. The strongest opposition, however, comes from the Association of Slovak Towns and Villages.

Supreme Audit Office Chairman Ján Jasovský encourages MPs to approve the revisions. Paradoxically, however, last year, when Jasovský was still an MP for the opposition Movement for a Democratic Slovakia, he abstained from voting.

"At that time I did not have sufficient information about the issue to make a responsible decision," the top auditor said.

The Association of Towns and Villages maintains that the current extent of the audit office is sufficient to control municipalities.

"The system of controls must correspond with the basic principles of building the self-ruling nature of towns and villages," the association said in a statement issued March 30. According to the statement, Lipšic's proposal does not respect this principle.

Komlósy of the SMK agrees. "I personally do not think it's right that [the Supreme Audit Office] would oversee the municipalities' own income".

"It is quite possible that this will not pass. Not even the coalition is united on the issues," Mesežnikov said.

"Although there is public pressure urging the passage of these proposals, the political climate is not inclined to make them," he said.

Mesežnikov remarked on "Lipšic's sincerity when proposing these revisions". He said: "It is legitimate to try to push changes through even if it seems unrealistic that they will pass," the analyst said.

The Coalition Board is expected to discuss the issue at its first meeting in April.