ONE YEAR ago, seven former Soviet satellite states were officially welcomed to NATO in the alliance's biggest expansion in 55 years. Among those inducted on March 29 was Slovakia, whose politicians interpreted its entry as the fulfilment of "a great hope of many generations of democrats". 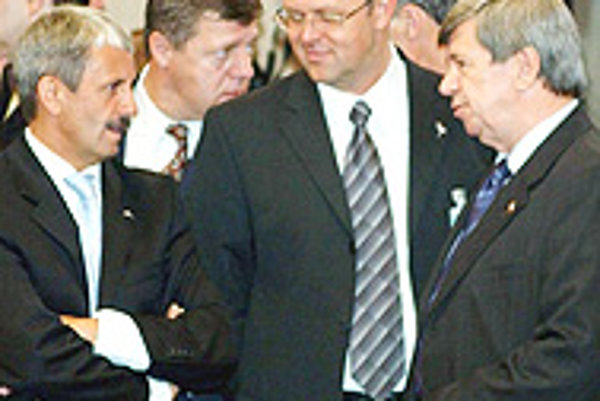 Font size:A-|A+0
ONE YEAR ago, seven former Soviet satellite states were officially welcomed to NATO in the alliance's biggest expansion in 55 years. Among those inducted on March 29 was Slovakia, whose politicians interpreted its entry as the fulfilment of "a great hope of many generations of democrats".

The Slovak Foreign Affairs ministry says that the first year of NATO membership has met the country's expectations. Although less enthusiastic than the government, political analysts agree that NATO membership succeeded in avoiding its critics' worst fears.

"It has not proved true that NATO would drag Slovakia into some military conflict," Ivo Samson, an analyst with the Slovak Foreign Policy Association, told The Slovak Spectator. He told the paper that even the most discussed and arguable military operation - the one in Iraq - was not under NATO but coalition command.

"First, NATO has brought Slovakia a certain feeling of security from collective defence. Second, it has dragged Slovakia out of its regional isolation. After 1999, the country shared more than 86 percent of its borders with NATO-member countries with only Ukraine to keep it company. Austria, though not a NATO member, already belonged to the EU," Samson said.

According to Samson, the third advantage of NATO membership is that Slovakia is saving money.

"This year, Slovakia is spending about 1.9 percent of the GDP on defence, which is considerably less than what neutrality costs in Finland, Sweden or Switzerland. NATO, as a collective defence organization, is much cheaper than individual defence efforts," Samson told The Slovak Spectator.

Between 1999 and 2004, Slovakia spent almost Sk10.1 billion (€260 million) on preparations for entering NATO. The modernization of military communication systems cost Sk1.66 billion (€40 million), according to the news wire TASR.

The Foreign Affairs ministry says that NATO is an organization in motion.

"It is transforming, reacting to new security threats, developing strategic partnerships and joining operations to support peace and stability far from its members' territories, or anywhere required for members' security," the ministry told the news wire TASR.

"NATO membership gives Slovakia the opportunity to become a part of the dialogue and decision-making of the strongest political and military organization in the world," the Foreign Affairs Ministry's spokesman Juraj Tomaga said.

The Defence Ministry agrees with the Foreign Ministry.

"The main benefit of Slovakia's membership is political, as the country has become a member of a group that decides about issues of world importance," Milan Vanga, spokesman for the Defence Ministry, told The Slovak Spectator.

According to Vanga, the Slovak army is gaining new military experiences through the NATO structure.

"During its first year of membership, Slovakia continued operations in Kosovo and Bosnia and Herzegovina, which we later finished. Slovakia has also joined the NATO operation in Afghanistan and promised to take a NATO role in reforming the defence sector in Iraq," Vanga said.

He underscored that Slovakia wants to act not only as a consumer of security but also as its co-producer. How, exactly, Slovakia benefits the alliance is a valid question.

Analysts suggest that Slovakia helped the alliance ease internal divisions between the US and Europe.

Samson told The Slovak Spectator: "Though NATO is not in crisis, we can tell that the alliance found itself in a very unpleasant situation when NATO divided into transatlantic and European sections. Without the influx of those new members in 1999 and 2004, the alliance would have split into two parts and the USA would likely have pulled out of the alliance because it would no longer have fit their interests."

"Like other Central and Eastern Europe countries, Slovakia tends to favour a transatlantic point of view, which also shows that we have chosen to follow the original values of NATO, which can be characterized as transatlantic values." However, the analyst does not see a NATO future without hurdles.

"NATO obviously has not been able to agree on a consensus, which means that the Euro-American disagreement continues and I think the focus is moving from a military-political organization to a political-military body, which means that it is getting closer to a model like the Organization for Security and Cooperation in Europe (OSCE)," Samson told The Slovak Spectator.

On Slovakia's political stage, only the parliamentary Communist Party continues to dismiss NATO as a "relic of the Cold-War era".

At the time of Slovakia's entry into NATO, the former chairman of the ruling Christian Democratic Party, Ján Čarnogurský, said that NATO could actually expose Slovakia to "possible terrorist attacks" rather than bring it more security.

"NATO membership can draw us into armed conflicts that are far beyond our military capabilities, as has already happened in the case of Iraq and Afghanistan," he said.

Čarnogurský also thought that by building foreign military bases in Slovakia, the state would become a potential target of nuclear missile attacks.

In January 1994, former US President Bill Clinton met with V4 state officials, which resulting in former PM Vladimír Mečiar saying that Slovakia's entry into NATO was merely a matter of time. One month later, Mečiar signed the Partnership for Peace, a political framework document for NATO accession.

However, in August 1995, after the abduction of President Michal Kováč's son earlier in the year, a high standing US official warned Slovakia that it lagged behind the other V4 states in terms of adhering to democratic principles and suggested that the country might be isolating itself.

In October 1995, the US administration sent a demarche to Slovakia reminding the state that respect for democracy is crucial for the country's progress in its transformation.

In April 1996, Slovakia was still on the list of candidates for NATO entry, but NATO officials urged the Mečiar administration to prove its commitment to democracy. A few months later the US again expressed concerns about Slovakia's failure to observe democratic principles.

In March 1997, Mečiar publicly admitted that Slovakia could be left out of the first wave of NATO expansion. Two months later his government thwarted a referendum on Slovakia's NATO entry.

In July, a NATO summit in Madrid decided that Hungary, Poland and the Czech Republic would be invited to join the alliance. After the parliamentary elections in 1998, PM Mikuláš Dzurinda met with NATO and EU officials, soliciting a "good signal for Slovakia" from the NATO's April 1999 summit.

In March 1999, the Slovak cabinet opened Slovakia's skies to the alliance in connection with NATO operations in Yugoslavia. In April, Slovakia was included on the list of NATO candidates.

In November 2002, Slovakia, along with six other post-communist states, were invited to join NATO at its Prague summit, and in March 2003, the ratification of accession protocols started.

In April 2003, parliament approved Slovakia's accession to NATO and in February 2004, NATO expansion was approved in all member states.

On March 29, Slovakia and six other post-communist states formally entered the alliance after handing in their national ratification documents to the US administration. NATO thus expanded from 19 to 26 members.