THE COMMUNISTS' "bloodless coup" on February 25, 1948 marked the beginning of more than four decades of hard-line Communist rule. It also paved the way for the creation of special military units designed to keep potential political "combatants" under control. 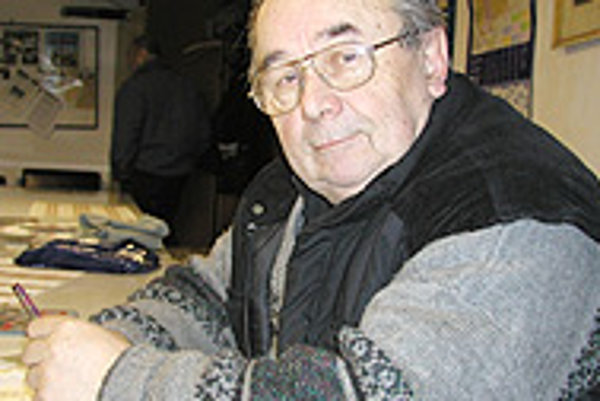 Font size:A-|A+0
THE COMMUNISTS' "bloodless coup" on February 25, 1948 marked the beginning of more than four decades of hard-line Communist rule. It also paved the way for the creation of special military units designed to keep potential political "combatants" under control.

"In the interest of securing and maintaining its political power shortly after seizing control in February 1948, the Communist Party of Czechoslovakia started to separate real and perceived enemies of the state from those devoted or loyal to the regime," says František Kľuska, who belongs to the Slovak Military Forced Labour Camps Association.

According to Kľuska, those who openly opposed the 1948 government were sent directly to prison while the others, mainly young men deemed "politically unreliable" for various reasons, were conscripted into special military battalions. Known first as "road battalions" and then later as "supportive technical battalions", these units were used by the Slovak military as forced labour. By 1952, more than 30,0000 "political unreliables" were serving.

On December 1, 2004, the Slovak parliament approved legislation granting compensation to those sent to military forced labour camps between 1948 and 1954. For those soldiers who are no longer alive, their widows are eligible for compensation on their behalf. The Defence Ministry will administer the law.

"At that time anybody could be labelled with the 'politically unreliable' stamp," says the association's Kľuska. "It could be the son of a small businessman, a person with family in the West or someone whose father wouldn't join the farming association. Of course, young priests, monks and clerics, after being chased out of theological universities, were also considered enemies of the state."

Kľuska knows this sad phase in Slovak military history intimately. He was one of those deemed politically unreliable. Born in Hruštín in the Orava region, Kľuska was one of eight children. He was studying to become a priest when the regime forced his school in Spišské Podhradie to shut its doors. It was the summer of 1950 and Kľuska had already completed three years of school. During his forced military service, while he was building underground munitions bunkers, Kľuska was buried when the entrances and exits collapsed - not once, but twice. He managed to escape. In spite of the delays and setbacks, Kľuska also managed to graduate from university, earning a mathematics and physics degree.

The main aim of these labour camps was to isolate real or potential political opposition and to use all available means to break or reform it. Political workshops, isolation from society and 14-hour work shifts were designed to humiliate and psychologically diminish all who were subjected to it.

Instead of a compulsory two-year military service, these so-called soldiers of supportive technical battalions had three to three-and-a-half year tours.

The young men serving in these battalions represented a steady stream of cheap labour. They worked in mines, built underground supply houses and bunkers and even helped construct airports. The cost of supporting these battalions amounted to nothing more than basic food and shelter.

After 1954, and after the deaths of Stalin and Czechoslovakia's President Gottwald, the political pressure in the country eased. Consequently, the forced labour camps as originally designed were abolished. Later, forced labour continued but in a much lighter version. People argue that after 1954, soldiers belonging to supportive technical battalions were not worse off than regular soldiers. The politically unreliable soldiers drank a lot, visited women and, in some cases, received better salaries than their counterparts.

"It is possible, that some parts of the country were really like they say, but certainly not between 1948 and 1954, which was comparable to Russia's Gulags," said Kľuska.

"One of the worst things about the special battalions is that the young soldiers got an indelible 'black mark' against them in terms of political loyalty. This meant that the regime considered these people politically unreliable - an evaluation that was often passed on to their relatives and offspring.

The Slovak Military Forced Labour Camps Association is a non-governmental organization represented by 35 regional clubs with a total of 2,150 registered members. The club in Považská Bystrica has 67 members, all men, all older than 70 years. They heat the meeting room with wood in an old fireplace. On Wednesdays, they some bring food from home. Some drink a little slivovica (plum schnapps) with their tea.

"Were your parents farmers or owners of factories when the Communist regime identified you as politically unreliable?" we ask Michal Furdza from Udiča.

He smiles. "I come from a family of eight siblings and the hardship we had, I wouldn't wish on anybody." He explains how he ended up getting conscripted. "The chairman of the Communist party in our village [Okrut] denounced me as a secret agent because my brother emigrated in 1948. And that was it. I spent 33 months at a forced labour camp because of it."

Ambróz Mráz from Milochovo has tears in his eyes. "I'm happy that you are here and that I can tell my story to someone, because I lived my whole life with a feeling of injustice. It hounded me all my life, and I was losing hope that the truth would come out," he says. Mráz worked in a coalmine, Ležák mine at Mariánska Hora, which was 850 metres deep. The corridor was only 80 centimetres high, forcing the labourers to work while laying down. He says it was just survivable.

"They were killing us down there like the worst criminals, but that was only the beginning. It was heartbreaking to see my children denied a chance to study at university. And according to everyone, I was an unreliable, antisocial element," Mráz says sadly. He was being punished for the fact that his brother left for England in 1947.

Ferdinand Matušík from Upohlav served as a soldier from 1951 to 1953, 26 months in total. Similar story, same tears.

"Small villages were the worst because the local Communist representatives intensified the hardship for years. Children of 'politically unreliable' fathers were denied higher education," says Jozef Ondrášek from Orlové. Ondrášek was forced to enlist in the labour camp because his father was a village mayor before the 1948.

Miroslav Mišún from Košeca tells it this way. "After three months of mining in the Ludvik mines in Ostrava [in the Czech Republic], I thought I would not get out alive. A man, however, can take a lot of hardship. But the worst is that, all my life, I was afraid that someone would take the country back 50 years and give a hard time to my children. I felt like I always had to stay in the background, never say anything because I couldn't risk my children's existence and future", says the former administrative officer.

Speaking sincerely, he says parliament's compensation plan is not a question of money. "I'm mostly happy to have moral satisfaction for the 26 months of forced labour and decades of living in uncertainty."

According to Mišún, he was lucky that no one gave him a hard time for his years in the labour camp. So why was Mišún conscripted? "Two things caused it. First, I joked with a friend on a train ride from Ilava to Dubnica, saying that we should go to America. We were arrested at the station and were interrogated for a month. The fact that the village Communist party chairman hated my father probably had something to do with it. In the end, I can say I was lucky because I wasn't sent to a political prison. I only had to join the labour camp."

Ľudovít Janco from Košeca joins the conversation. A convicted political criminal for illegal assembly, Janco was sent to a work the uranium mines in Jáchymov.

"After I was released from [political] prison, I was sent to work in Karvinské. I had a very bad accident there. The earth buried us and my leg was crushed." In spite of his injury, they wouldn't release Janco from service. They said "too politically contaminated".

After months healing in prison, the Communist authorities placed him in another labour camp. This time he worked as a car mechanic. After 28 months he was sent home from his "military service" which was anything but military.

And what, you may ask, is written in the destiny of Jozef Cahel, who finished his theological studies in 1990, 40 years after he was forced to interrupt his studies? Who was interrogated and later accused and convicted of spying for the Vatican? Who lived through beatings, torture and endured "only" two years in prison working in Jáchymov mines. Who was sent to another labour camp as a "soldier"? Who spent decades as a fourth grade citizen? Currently, Jozef Cahel works as a deacon in Považská Bystrica.

Švanda estimates that around 3,500 people are eligible for compensation. The extent of the compensation is set to Sk1,500 for every month spent in the battalions. Each month beyond two years' service will be compensated at Sk2,000 per month. The total payout cannot exceed more than Sk60,000, however. Widows are entitled to compensation not exceeding Sk30,000.

Applicants have until December 31, 2005, to send in their paperwork to the Defence Ministry. After that date, former special battalion soldiers will no longer be eligible to apply for compensation.

Any Slovak who spent time in the labour camps, even those currently living abroad, can apply. However, compensation is limited to those who have Slovak citizenship. The Defence Ministry emphasizes that it will rely on military archives to verify who was conscripted into the labour camps.