One who got away

"My homeland is... being a foreigner. It's a state of nakedness, no collective covers me," says Irena Brežná, for whom the theme of loss of one's country has become inseparable from the search for identity.
A Slovak who now earns a living writing in German, Brežná was forced to leave her homeland in 1968 when Warsaw Pact troops invaded Czechoslovakia. She went to Switzerland, which, to the young woman of 18 seemed "dead". 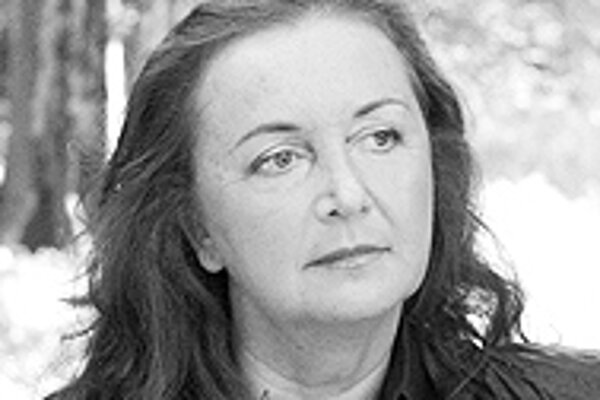 Font size:A-|A+0
"My homeland is... being a foreigner. It's a state of nakedness, no collective covers me," says Irena Brežná, for whom the theme of loss of one's country has become inseparable from the search for identity.

A Slovak who now earns a living writing in German, Brežná was forced to leave her homeland in 1968 when Warsaw Pact troops invaded Czechoslovakia. She went to Switzerland, which, to the young woman of 18 seemed "dead".

"As a young girl, I was brought up in a socialist revolutionary spirit. Suddenly I was in Switzerland, where there was nothing interesting going on for me," Brežná says, recalling 1968, the year of the Prague Spring and subsequent clampdown.

In March Brežná paid a visit to Slovakia to present her new book, Tekutý fetiš (Liquid Fetish). It is a selection of literary anecdotes, essays and short stories taken from her seven previous books. The publisher, Aspekt, specializes in women's literature.

Tekutý fetiš is a reflection of Brežná's wide ranging experience and interest, past and present. She recalls growing up in Communist Czechoslovakia as well as visiting after the Velvet Revolution. A supporter of Chechen women's peace activities, she also writes about the Chechen war. The father of her younger son is an African, Alpha Oumar Barry from Guinea, and she addresses issues relating to the continent.

Intercultural themes, along with the author's search for her identity, run through all her writings. Through the process of examining interaction between cultures the author feels she is able to "situate" herself.

"Tekutý fetiš is a record of her work and life. I hope that it helps her 'settle down' in Slovak literature," Cviková says.

The Slovak Spectator talked to Irena Brežná's about her work, her world view and her life in an interview a few days after she presented Tekutý fetiš in Bratislava on March 10.

The Slovak Spectator (TSS): In what way does Tekutý fetiš introduce you to Slovak readers?

Irena Brežná (IB): The idea of the book is to present me as a writer, a native Slovak, who has gone out into the world and reports to the German speaking press. And who is now returning to the Slovak public. To complete the circle, as it were.

TSS: You touched on your origin as a Slovak who was forced to leave her homeland for Switzerland. How is that experience reflected in your writings and in your identity?

IB: In writing I find my authentic identity. I put all the worlds I am confronted with together. It's my way of orientating myself. When I write I understand the world and myself better.

When you emigrate you can no longer rely blindly on the traditional values of your culture, you have to choose for yourself new customs - new ways of being and integrate them into your personality.

In my writing I record the complexity of this intercultural experience. I build my own values, which I deeply examined and accepted. Even though I was writing before I emigrated, I had to work hard to find my own literary language in the foreign language. Exile was like being back at Square One. I had to build my own homeland. I feel at home when I collaborate with people, when we are changing the world, it doesn't matter where it is, in Chechnya, in Guinea, in France, in Switzerland or in Slovakia. I don't have a geographic preference anymore.

As a reporter going to other countries, I open myself to new impulses, to new values, which influence me. My identity is thus constantly changing. It's in process all the time. And it has an impact on my writing.

TSS: You left for Switzerland with your parents in 1968. How do you recall those times?

IB: I didn't want to go. During the occupation of the Warsaw Pact troops I was in student camp in France. I didn't have the opportunity to protest against the occupation of my country. It was a traumatic event for me. That is probably why the common thread through my life is this right to stand up - to be friends with all those who stand up and denounce dictatorship and injustice.

When I came to the German part of Switzerland, I immediately realized that I would die without writing. I invested all my energy into learning German. However, I didn't really imagine that one day I would be able to write and publish in German. I married a German writer and thought he could write instead of me. This was a traditional female attitude. When I was 30 I realized that he could never write what I wanted to say. So, I divorced, stole his German language and started to write. This was me standing up for myself - I found my language.

The first book I wrote was my story of emigration, my childhood in Slovakia and exile [published in 1980]. It won a literary prize in Switzerland, which encouraged me to keep writing and I started to write for Swiss radio. While the actual emigration was like a death to me, the writing in German was the resurrection. I started to live, I became a voice.

TSS: What is it like writing in a second language?

IB: It's very good for me. It's very free. There are fewer taboos for me in this language because even when I know what is appropriate and what is not, I don't really pay attention to it. In Slovak I feel these constraints more strongly. I could never have written in Slovak all that I have written in German. What would my grandmother in Trenčín say? There would be this internal censorship.

In a foreign language I can wander. I sometimes use Slovak proverbs and sayings, I make the German smoother, I give it a Slovak smell. I help to enrich the German literary language, the way migrant writers from various cultures do. It took many years to realize I had this advantage - to bring parts of the culture I was brought up in into a new one, play with several identities and mix them the way I want, without sticking to one or the other. This is the future of our planet. Musicians already do this by mixing so-called ethno and modern music.

TSS: What are you trying to get across in your books? What themes are the closest to you?

IB: I try to show how I see things. I often write about the world of women because this world is very differentiated, has many colours and a distinctive atmosphere.

Men write from their point of view and it's very rare that I can identify with how they see the world. I have to express it how I see it. Like I expected my husband to see what I see - do the job instead of me. It is a job I have to do.

TSS: After you had got used to your new country, do you recall your first visit to Slovakia?

IB: I was suffering under the illusion that many immigrants have. That I had a homeland and I could return to the same collection of people I left when I was 18, and it would all be the same.

When I did return I was shocked that I didn't recognize anything and people looked at me as a stranger. I was confronted with a home country that had become a foreign country, like anywhere else. I had to accept that I didn't have a national feeling of "us", that my native people are different groups all over the world.

TSS: Have you ever thought of returning to Slovakia permanently?

IB: Well, the idea has crossed my mind. But how can I give up all these other cultures, which have become a part of me? I'm a Slovak plus all these foreign cultures; I cannot reduce myself to pure Slovak.

TSS: How would you define yourself today?

IB: I cannot define myself in a national context. I would say I am an ethnic Slovak, living in Switzerland, writing in German. But I can't call myself European. The connection to Africa is strong; not only because my second son has an African father.

TSS: How did you get to know your second husband?

IB: In Guinea, in West Africa, the communist dictator Sekou Touré ruled, and after he died in 1984, I went there as a reporter. It was like going home [to Czechoslovakia]. I could speak Russian, Czech or Slovak there, because many Guineans studied in the Soviet Union or in Czechoslovakia.

It was the first country where Communism collapsed. I went there regularly, I met my second husband and we wrote a book together for children. We wrote in French, and then I translated it into German. The book was published in Switzerland in German. We also built a library in the mountain region of Guinea. I collected 5,000 literary books and about 30,000 schoolbooks in Switzerland and took them to Guinea. The schoolbooks we distributed in schools all over the country. Guinea was not only discovering Africa, it was also politically important for me in terms of what is post-communism. I can see parallels now between Guinea and the Central and East European countries.

TSS: Did you go to Guinea through Amnesty International?

IB: It was one part of my role there. I joined the organization as a young girl. When I emigrated I had a feeling of not belonging to any society. Then I saw a report in a bus in Basel on torture in Chile and I admired these young people protesting against these atrocities. I joined them and in Amnesty International I found a sort of new homeland, a common spirit.

I worked for 12 years as a coordinator for Swiss groups that campaigned on behalf of Soviet prisoners. In the 1980s political prisoners were expelled from the USSR: I looked after them, organized conferences with them. Through these meetings and interviewing them, I started my journalistic career.

To me, they had the revolutionary spirit in which I was brought up. I had found my heroes. Their standing up for the own convictions showed me that human beings can transcend themselves and in spite of torture and prison can preserve their dignity. I am thankful to them, for showing me the enormous internal power we can develop.