SLOVAKS joined people around the world in mourning the loss of Pope John Paul II who died Saturday, April 2. The 84-year-old Holy Father led the Roman Catholic Church for more than 26 years. He became known as the "flying Pope" due to extensive travels 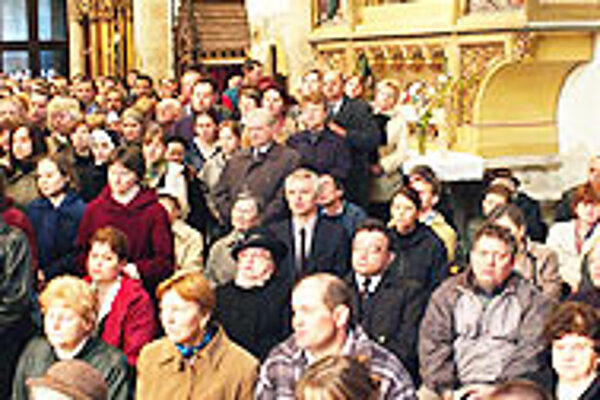 Font size:A-|A+0
SLOVAKS joined people around the world in mourning the loss of Pope John Paul II who died Saturday, April 2. The 84-year-old Holy Father led the Roman Catholic Church for more than 26 years. He became known as the "flying Pope" due to extensive travels. During his pontificate, he visited Slovakia three times. The Vatican announced the cause of the Pope's death as septic shock and a collapsed cardiovascular system. A urinary tract infection brought about the gradual failure of vital organs.

In the predominantly Christian Slovak nation, where more than 60 percent of people describe themselves as Roman Catholics, thousands followed television and radio programmes dedicated to the ailing Pope's last hours. While some prayed for the Pope in local churches, others left for Rome to pay tribute to the Polish native of Wadowice in person.

Special masses were held April 3 in homage of the deceased spiritual leader. Hundreds of people packed into Bratislava's St. Martin's Cathedral to attend. The church was so full, however, that many had to stand outside during the service.

Most churches were kept open on Saturday, the day before the Pope's death, to provide a place of worship for those praying for John Paul II.

"I think for the Slovak faithful, Pope John Paul II was like a father - a leader but also very good to us and so close," said Marián Gavenda, the spokesman of the Slovak Conference of Bishops (KBS).

František Tondra, the head of the KBS, described John Paul II as a "great gift" to the whole world. "His unforgettable pontificate is deeply inscribed in the hearts of us all," Tondra said.

According to Speaker of Parliament Pavol Hrušovský, the Pope's "faith, his irreplaceable vision of the role of religion in the world, his genuine ecumenism based on love and benignity and his openness and sincerity are a permanent inspiration for us in the future".

Slovak President Ivan Gašparovič said: "He became a symbol of the collapse of Communism in Europe, an advocate of human rights and freedom, an opponent of violence and injustice."

Gavenda says that many Slovaks reached out to the KBS with telephone calls and prayers for John Paul II.

"People are touched and sad. I even had several journalists start crying in the middle of conducting their interviews," the KBS spokesman said.

The Slovak Interior Ministry lowered Slovak and EU flags on April 4 to pay respect to the spiritual leader, whose last visit to Slovakia was in September of 2003. The flags will stay at half-mast until the expected funeral for John Paul II on April 8.

"The death of the Holy Father touches not only Catholics but also people of other faiths, even non-believers," said Slovak Prime Minister Mikuláš Dzurinda. "He knew Slovaks very well and he loved us very much," he said.

Political parties across the spectrum as well as various religious denominations in Slovakia released official statements mourning the Pope.

"This Pope was accepted by all of humanity. He was the most tolerant, the most reputable, and he was the first Pope to visit Jerusalem," said František Alexander, the head of Slovakia's Union of Jewish Religious Communities.

John Paul II, born Karol Wojtyla in 1920, visited Slovakia three times: in 1990, one year after the fall of Communism; again in 1995; and most recently in 2003. On his first trip to what was then Czechoslovakia, the Pope told Slovaks that he was not saying "farewell" to Slovakia but "goodbye".

"His visits were a great encouragement," said President Gašparovič, who made a point to remind Slovaks of the Pope's famous "Do Not Fear!" speech during his 1995 visit. According to Gašparovič, these words strengthened Slovaks in their faith and hope for a better future.

"The consequences of the [Communist] totalitarian regime, which has caused true devastation in social, cultural, political and religious areas, are well known. I have come to you as a pilgrim of Jesus Christ, to encourage you to persevere in the journey you have started," the Holy Father told Slovaks in 1995.

According to Roman Catholic Cardinal Ján Chryzostom Korec, the Pope liked Slovaks' "character, the way we perceive faith, our piety and the worship of the Virgin Mary", who is Slovakia's patron saint.

According to Korec, Pope John Paul II was "gifted as few are".

"It is hard to count all the things he was," said Korec.

On Sunday, when the Vatican held its mass for the deceased Pope, Slovak churches across the country rang their bells for the pontiff.

"We had a very good father who took care of us, but now we definitely have an even better supplicant in heaven. That is our faith," Ján Zentko, a priest from Spišská Nová Ves, told the TASR news agency.

Along with hundreds of Slovak pilgrims, President Gašparovič and Parliamentary Speaker Hrušovský will bid farewell to Pope John Paul II in Rome on April 8.