Life in the EU without tobacco?

THE EUROPEAN Union has launched a massive anti-smoking campaign worth €72 million. The campaign, entitled "Help: For a Life Without Tobacco", primarily targets adolescents and young adults.
At a campaign stop in Slovakia on March 31, EU officials said they would tour all 25-member states to present the new campaign. The goal is to encourage people to quit smoking and to prevent non-smokers from lighting up. 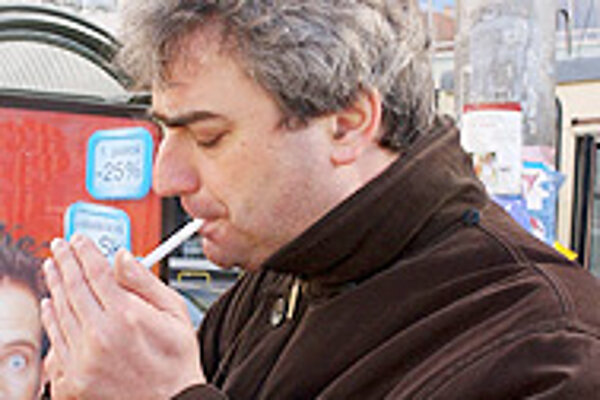 Font size:A-|A+0
THE EUROPEAN Union has launched a massive anti-smoking campaign worth €72 million. The campaign, entitled "Help: For a Life Without Tobacco", primarily targets adolescents and young adults.

At a campaign stop in Slovakia on March 31, EU officials said they would tour all 25-member states to present the new campaign. The goal is to encourage people to quit smoking and to prevent non-smokers from lighting up.

"It is easy to take up smoking but hard to quit. It is important to deliver the message that a cigarette in hand is not the sign of a modern man," Eric van der Linden, the European Commission's representative in Slovakia, told a press conference.

Slovakia's Health Minister Rudolf Zajac, an ex-smoker who quit after becoming minister, now considers smoking "dumb". He believes that putting an ex-smoker in charge of the nation's anti-smoking laws is the best way to get Slovaks to kick the bad habit.

Zajac and his ministry are preparing legislation that would toughen Slovakia's laws regulating smoking.

According to EU statistics, member states spend billions of euros annually treating smoking-related health problems. At the campaign launch in Brussels in the beginning of March, EU Health and Consumer Protection Commissioner Markos Kyprianou called the "Help" campaign an investment.

"The sickness and death caused by smoking costs EU countries €100 billion a year. Prevention and information campaigns like this one are an investment in a healthier and more prosperous future for our citizens," he said.

In addition to promoting tobacco-free lifestyles to young people, Kyprianou said the campaign would also highlight the dangers of passive smoking and support the trend towards tobacco-free public places.

According to Kyprianou, the "Help" campaign targets adolescents between 15 and 18, and young adults up to 30.

A commercial is scheduled to air on television and in movie theatres this summer following the road show across the EU.

Statistics confirm that promoting the idea of a tobacco-free lifestyle to young people has the greatest potential.

"Eight out of 10 smokers start in their teenage years," said Kyprianou. "Once hooked, it is a habit that takes many young people to an early grave. Every year, 650,000 EU citizens die from tobacco-related disease. I am determined to do everything I can to stop young people from taking up smoking, and to help young smokers kick the habit before it ruins their health.

"I want to see a major shift in our society, where being smoke-free becomes the norm and the smoke-addicted are a dwindling minority. If all EU countries followed the lead of Ireland, Italy and Malta and banned smoking in public places, it would go a long way to achieving this," Kyprianou said.

"Help" is the second major EU-wide anti-smoking campaign initiated and run by the European Commission. Between 2002 and 2004, a similar campaign, entitled "Feel Free to Say No", toured across the union.

According to Darina Sedláková, a representative of Slovakia's National Coalition for Tobacco Controls, the campaign has three levels: prevention, quitting smoking and the dangers of second-hand smoke.

Health Minister Zajac is determined to revise the existing law on smoking in public places for the protection of non-smokers. He hopes parliament will adopt a stricter application of the law and push through several new clauses.

"We have prepared a proposal that toughens the law on smoking. We want to make sure that existing sanctions are enforceable, and we want to ban cigarette machines outright," said Zajac.

The Health Ministry supports a clause that would limit smoking in public places such as health institutions, and require restaurant owners to separate smoking from non-smoking areas.

A poll conducted by the Slovak Statistical Office in December 2004 shows that Slovaks tolerate tobacco and alcohol as legal drugs. As many as 28 percent of Bratislava's youth are daily smokers; 18 percent are occasional tobacco users.

The poll also shows that among the adult population, men between 50 and 59, largely blue-collar workers and the unemployed, are the most regular smokers. Women and senior citizens are the least likely to smoke.

Smoking levels have increased slightly since 1994. However, levels have remained steady over the past decade. Smoking reached its peak in 2000, when 32 percent of the Slovak population said they smoked every day, while 14 percent smoked occasionally.

The highest proportion of young smokers also occurred in 2000, when 29 percent of Bratislava's youth smoked daily.

The Slovak Statistical Office's poll also points to a link between smoking and drinking.

As many as 58 percent of regular youth smokers admitted to drinking alcohol. On the other hand, 63 percent of young non-smokers did not drink.

In 2004, 48 percent of the poll's respondents said that they tried quitting smoking but failed.

"Every 10 seconds, a person dies in the world as a result of smoking," he said.