Caught between the covers

HOW often do you find yourself leafing through pages of full colour lifestyle magazines in a supermarket and end up leaving the shop empty-handed? The fast flick certainly annoys shopkeepers and distributors alike, both of which want to sale. 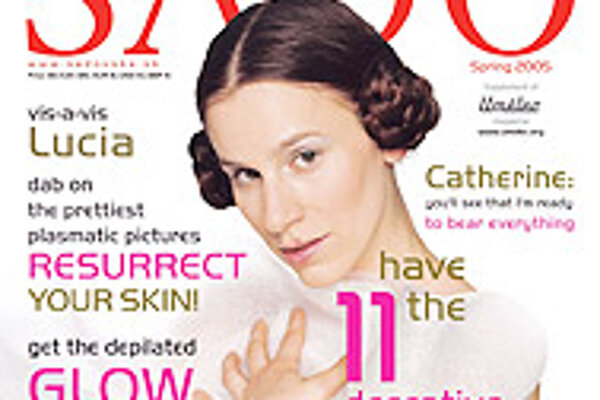 Font size:A-|A+0
HOW often do you find yourself leafing through pages of full colour lifestyle magazines in a supermarket and end up leaving the shop empty-handed? The fast flick certainly annoys shopkeepers and distributors alike, both of which want to sale.

This "skimming" phenomenon inspired well-known Slovak artist Dorota Sadovská to publish a magazine of her own, on herself and her work. She has captured her artworks - and herself - between the covers of a glossy, high-quality magazine. Through its eye-catching cover and provocative title, SADO, Sadovská has smuggled her art into the world of the casual supermarket magazine browser.

"It's a kind of game, a mini-gallery in a supermarket," says the 32-year-old artist. "And... I yearned to be discovered myself."

Sadovská does not intend to push other magazines off the shelf. Rather she feels sure that her publication will find its place in that "great yawning gap between the dozens of women's magazines and the professional journals devoted to the secrets of contemporary artists".

SADO magazine, issued in Slovak and English, has the same quality and depth as Sadovská's real-life artwork.

The magazine's striking cover is an artistic "face" wearing heavy magazine-model makeup: Slogans from the world of wellness combined with quotations from medieval legends about saints adorn each side. The predominantly red lettering is set on a white background. The central female figure, (the artist herself) is photographed in a bashful, bride-like pose, wrapped in protective film. Once opened, the magazine's 100 pages guide you through "galleries" of the artists work since 1992.

Readers can browse yellow pictures of saints and study parts of their bodies in a visual dictionary - a collection of 20 acrylic paintings - as well as see the artist's favourite religious motifs located in various types of space installations and different environments.

The artist herself is present in Martyrdom, as she undergoes the torture of rolling down a hill in a yellow barrel full of pine needles, undertaken to simulate the martyrdom of St Sebastian.

The magazine includes explanations for the genesis of Sadovská's works. Lucia Lendelová conducts a lively interview. The magazine's graphics and its title, SADO (on the cover) and V-SK-A (on the back - SK is an abbreviation for Slovakia) were designed by Sadovská's husband; the cover photo is the work of leading photographer of the new wave of the 1980s, Miro Švolík.

"It's a group work," says Sadovská, who plans to put out another issue in the second half of 2005. That one will focus on the more "fleshy" side of her work, presenting her ironic, or rather sadistic views of women's body parts, making the magazine fitting its SADO title more aptly.