You want it, we got it

HITCH is a most traditional romantic comedy, though not in the stylistic sense. Rather, it sticks to classic Hollywood's guiding principle: Have something for everybody. 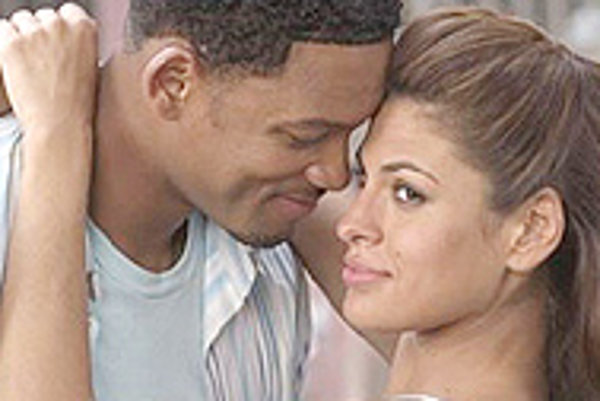 HITCH is a most traditional romantic comedy, though not in the stylistic sense. Rather, it sticks to classic Hollywood's guiding principle: Have something for everybody.

To begin with there's Will Smith, that rare action star who appeals to women and men alike. What's his secret? He never changes character. He remains his old charming self. Though he has seemingly spent most of his career wielding a gun and bickering with Martin Lawrence, Smith could just as easily have been carrying a rose and gazing deeply into a woman's eyes.

Hitch gives him that opportunity with Eva Mendes, perhaps best known for the Farrelly brothers' Stuck on You, in which her most distinguishing characteristic was her ample bosom. In Hitch she's more three-dimensional, and quite likeable - a worthy complement to Smith's well-intentioned Lothario. The two come from opposite ends of the love spectrum.

This sets the stage for plenty of playfully adversarial banter, yet another romantic comedy requirement. But don't expect anything reminiscent of the screwball comedies of the 30s and 40s (think Cary Grant and Katharine Hepburn); Hitch is not so bitingly witty. But this doesn't mean it isn't enjoyable.

In fact, it seems calculated to please as many people as possible. The presence of Smith (and Mendes, with her aforementioned ample bosom) guarantees that the boys won't object too strongly when their girlfriends drag them to the theatre. What about gay men? Well, there's one of them too, in an important supporting role (Nathan Lee Graham, as Sara's friend and colleague Geoff) - but not so important as to turn off the straight boys. Seemingly, lesbians are the only demographic ignored.

The casting of Mendes was allegedly the biggest bit of calculation. The studio (Sony's Columbia Pictures) reportedly chose her because she is Latina (Cuban-American to be exact), and thus would have the broadest ethnic appeal. She would obviously attract fellow Latinos and, because she is still a "person of "colour", not offend anyone: If the love interest were white, white people, and some black people, would have stayed away in droves. If she had been black - the thinking went - white audiences would have had no interest. And so: Eva Mendes. It paid off, as she and Smith have a natural rapport.

Smith also works well with Kevin James, who plays Albert, an awkward, overweight accountant in love with his beautiful and wealthy client Allegra (Amber Valletta). Desperate to win her heart, he hires Hitch, New York's legendary "Date Doctor", to coach him through the courtship. Admittedly, much of the comedy in Smith's and James' scenes misses its mark, straddling the line of mean-spirited stupidity; fortunately, James is talented enough to retain the audience's (and other characters') sympathy.

Albert is the ideal client for Hitch. On one hand Albert's clueless zeal is precisely what Hitch needs to woo the jaded Sara. At the same time, Albert's total unselfish devotion to Allegra is exactly what Hitch's business is about: As he angrily tells a potential client who merely wants to get a woman into bed, "My clients actually like women."

Though certainly calculated to please a female audience, this line is absolutely believable in the hands of Smith, even if the movie as a whole isn't at all. But that really doesn't matter: Some misguided comedy aside, Hitch is an incredibly sweet, at times surprisingly clever, romantic comedy that it's hard not to enjoy. In other words, it's exactly what it's supposed to be.