THE GOVERNMENT will undergo an overhaul in mid May when the New Citizen's Alliance (ANO) withdraws Culture Minister Rudolf Chmel and replaces him with František Tóth, the former deputy education minister. Rather than fill Tóth's vacancy at the Education Ministry, the ruling party wants to create a second deputy minister position within the Culture Ministry. 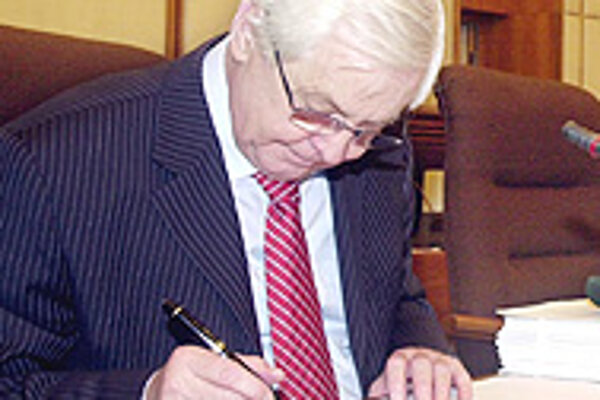 Font size:A-|A+0
THE GOVERNMENT will undergo an overhaul in mid May when the New Citizen's Alliance (ANO) withdraws Culture Minister Rudolf Chmel and replaces him with František Tóth, the former deputy education minister. Rather than fill Tóth's vacancy at the Education Ministry, the ruling party wants to create a second deputy minister position within the Culture Ministry.

ANO nominee Tóth agreed to leave the Education Ministry after butting heads with Education Minister Martin Fronc, appointed by the Christian Democratic Movement (KDH). The conflict between the two peaked on April 4 when Tóth strongly criticized Fronc's new draft education bill, saying it was "so bad it could not be fixed".

After Tóth publicly declared that Fronc's proposed legislation was the worst the ministry had ever produced, Fronc reduced Tóth's powers at the ministry and said he expected him to resign. Fronc argued that the deputy minister wanted to "kill the reform politically".

According to Fronc, the draft bill is designed to reform Slovakia's elementary and secondary schools to bring "less drilling and more imagination and creativity to our schools". If approved, the education minister says the legislation would set new limits for required learning, allow home schooling and create better conditions for teachers.

Senior members of the KDH and the ANO met separately on April 11 to discuss the situation between Fronc and Tóth. On behalf of the KDH, Party Chairman Pavol Hrušovský expressed full support for Fronc and denounced Tóth's behaviour.

"We condemn the way the deputy minister misused a press conference to make undignified statements against the proposed education law," Hrušovský said.

Following the ANO meeting, Party Chairman Pavol Rusko announced that Tóth would take over from Culture Minister Chmel, who is expected to resign in mid May. Rusko made a point to show public support for party colleague Tóth.

"We will continue to influence education-related laws in parliament but the ANO is neither able nor willing to be responsible for the situation at the ministry," Rusko told a press conference April 11.

Based on the Coalition Treaty, an agreement between Slovakia's four ruling parties after the September 2002 national elections, each party is entitled to a certain number of posts in the central government depending on election results.

Because the ANO does not plan to fill the vacancy that Tóth is leaving behind at the Education Ministry, the party is proposing to create a new deputy ministry post. Specifically, the ANO wants to nominate a party colleague to be a second deputy culture minister under Tóth, when he replaces Chmel.

Such a move, however, would require approval from the senior coalition bodies. Critics say that the Coalition Treaty would have to be reworked.

Gyula Bárdos from the SMK said that there was no need to create another deputy ministerial post "just because the ANO has personnel problems".

"The ANO didn't think another deputy culture minister was necessary until now," he said.

Nevertheless, Ľubomír Lintner from the ANO believes that the ruling coalition partners will be able to reach an agreement over the issue.

"I understand [the SMK's] fears, but this is not about wanting to diminish the SMK's power at the ministry, but about the ANO trying to nominate another managerially skilled person to the ministry. It requires explaining but I think we will be able to agree in the end," Lintner said.

Lintner added that swapping ministerial seats is not without precedent. When Michal Horváth, ANO's former deputy labour minister, left to work for social insurer Sociálna poisťovňa, the ANO asked the government to leave the Labour Ministry seat vacant. In its place, the ANO created a new deputy minister position at the Health Ministry and filled it with an ANO colleague.

"The Coalition Agreement says that the ANO has a post at the Labour Ministry and no one has any problems with it," said Lintner.

Senior members of the ruling coalition are expected to discuss the issue at a planned board meeting. Although the SMK has already presented its opinion on the matter, the SMK's Bárdos said they were "open to discussions".

Ironically, the replacement of Culture Minister Chmel is a lesser surprise than the ANO's desire to swap ministerial seats. Chmel has been considering leaving the seat for several months.

The culture minister's biggest problems arose when the government ordered him to take charge of plans for the completion of the new Slovak National Theatre (SND) building.

Originally, the plans for the SND were in the hands of the Economy Ministry, where ANO Chairman Rusko presides as minister. But Rusko's idea to sell the unfinished SND building to a private US investor raised protests in the artistic community. Opposition MPs even called a special session over the issue. At that point, the Culture Ministry was made responsible for the SND's future.

Chmel recently presented an alternative solution for the completion of the unfinished SND building. He said that the state should finance the completion, an option that Economy Minister Rusko and Finance Minister Ivan Mikloš oppose. They argue that a private investor should be engaged to complete and operate the new SND building, as the state does not have the money to do so.

When asked whether he thought Tóth was a qualified replacement for him, Chmel said, "It is a party decision and I respect it."

According to Rusko, Tóth would leave the Education Ministry soon so he would have time to prepare for the new job as culture minister.

Chmel said that the SND case is not motivating his departure. He told the television news channel TA3 back in November of last year that he was considering leaving the ministry because he had "already exhausted my possibilities of creative input".