THE SLOVAK cabinet once again failed to reach an agreement regarding the land that Korean carmaker KIA needs to complete its new production facility north of Žilina. However, a majority of ministers are leaning toward paying the price the landowners originally requested. 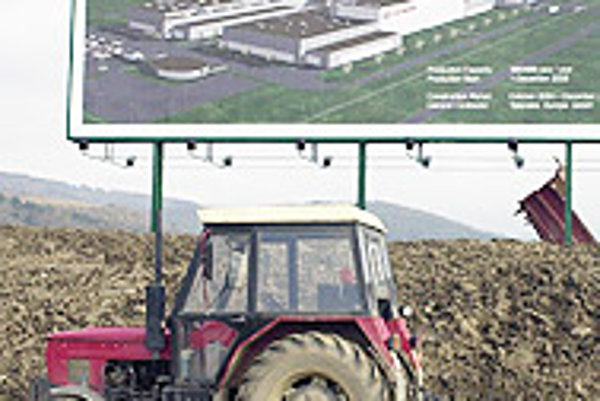 Font size:A-|A+0
THE SLOVAK cabinet once again failed to reach an agreement regarding the land that Korean carmaker KIA needs to complete its new production facility north of Žilina. However, a majority of ministers are leaning toward paying the price the landowners originally requested.

Economy Minister Pavol Rusko originally proposed a land-exchange deal saying that it was the best way to resolve the situation. The cabinet rejected Rusko's proposal on April 13. Agriculture Minister Zsolt Simon and Justice Minister Daniel Lipšic are the most vehement opponents of the land-swap.

Simon warned cabinet members of the risks associated with the land exchange, insisting that the cabinet meet the landowners' price, even if it is at odds with the principle that the state should not buy land for a price above that which is set by experts.

The Justice Ministry thinks going against the principle is more acceptable than the land-swap deal.

"The opinion of Minister Simon is also our opinion. Simon told the cabinet that he does not think that one of the best solutions is what Minister Rusko proposed. He thinks that the government has only two options: expropriate the land or pay Sk350 per square metre to the landowners," Justice Ministry spokesman Richard Fides told The Slovak Spectator.

He continued: "It means that there are only two options in play and the cabinet will decide between them. Certainly, the Justice Minister did not evaluate which of the two options is better. It is up to the government to decide. The point is that Minister Lipšic leans to Simon's view that the land swap is not acceptable."

According to Rusko's land-swap proposal, private investors would buy the plots at the requested price and then exchange the land for another parcel administered by the Slovak Land Fund. The government would then transfer the land it received from the investors to KIA.

Lipšic could not understand wanting to buy land for more than Sk180 million (€4.59 million) in order to exchange it for state land worth just Sk80 million (€2.04 million), and therefore mistrusted the deal.

Rusko viewed the exchange of the KIA land as an option that would solve the issue in a reasonable amount of time. Time is the cabinet's worst adversary in the KIA deal.

The media reported that KIA representatives are getting nervous about not having been presented with the land that the Slovak state has promised to them. It suggested that KIA has been communicating with investment agencies in the Czech Republic, Poland and Hungary. Official KIA sources deny talking with neighbouring countries.

"There were no official negotiations between KIA motors managers and representatives of agencies from Poland or the Czech Republic," KIA Communications Manager Dušan Dvořák told The Slovak Spectator.

"KIA representatives met with some members of the Slovak government and were presented with certain solutions," Dvořák said.

KIA Motors Slovakia Vice President Chang-Kyun Han told the financial daily Hospodárske noviny that KIA believes the problem will be solved within the week and that they have not considered leaving Slovakia.

"We are staying," Han said.

On April 13, Rusko submitted a modified proposal to the original land-swap deal, but this failed too. Rusko is happy, at least, that the cabinet is leaning against the lengthy land expropriation option, which would have delayed the process by several months.

On April 6, the cabinet agreed that the Regional Development Ministry would prepare an amendment to the land expropriation law that would require landowners to sell their land to the state in cases of strategic investments and highway construction. Lipšic also submitted a proposal to give expropriation authority to regional building offices instead of local ones.

Late March, Žilina Mayor Ján Slota told The Slovak Spectator that Minister Simon's proposals were unrealistic and that the agriculture minister was prolonging the case artificially.

"Simon's proposal recommended that the government pay the Sk350 [the price per metre originally asked by the landowners]. If we did that, it would mean the first domino tile would fall. It would have huge consequences, and I think that all pending strategic investment projects would grind to a halt," Slota said.

In late March, the media reported that the reluctant landowners were signing contracts with three unnamed investors who had decided to buy the land at an inflated price in the hopes of exchanging it with land administered by the Slovak Land Fund.

State agencies have already purchased 174 hectares of land near Žilina out of a requisite 230 for the auto manufacturing plant. According to original investment plans, KIA building works should be finished by September 2005. Trial production should start the following May, with real production starting in January 2007.

(Magdalena MacLeod
contributed to the report.)