DEPUTY Transport Minister Mikuláš Kačaljak will hand in his resignation May 1. The decision comes after New Citizen's Alliance (ANO) Chairman Pavol Rusko called on Kačaljak to step down after information surfaced linking him to bad debts. 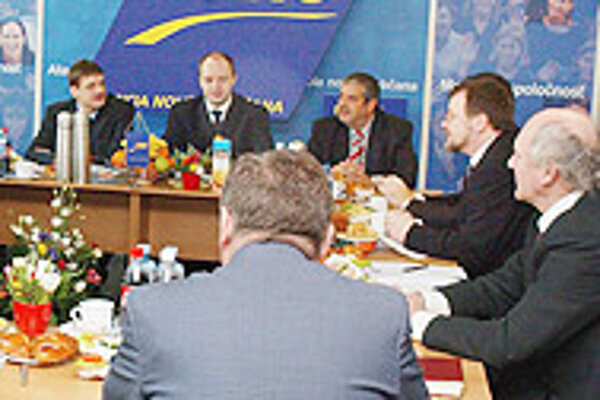 Font size:A-|A+0
DEPUTY Transport Minister Mikuláš Kačaljak will hand in his resignation May 1. The decision comes after New Citizen's Alliance (ANO) Chairman Pavol Rusko called on Kačaljak to step down after information surfaced linking him to bad debts.

Following an April 11 board meeting, Rusko announced that the ANO wanted to make sure that "not even a shadow of suspicion is shed on the party". The economy minister said: "This should also be a signal that we will watch for this in the future."

Kačaljak agreed to leave his post without protest. The ANO has not yet appointed a replacement.

On April 8, the daily Pravda reported that unofficial information linked Kačaljak to a debt worth about Sk8 million (€206,000) owed to the public social insurance company, Sociálna poisťovňa (SP). Most of the sum represents late charges for unpaid social insurance by a company called KDR.

Kačaljak's limited liability company, Myka, is one of two partners forming KDR. According to Pravda, the business register lists Kačaljak as a member of KDR's supervisory board until October 2003.

The deputy minister's decision to leave his post put the spotlight back on Labour Minister Ľudovít Kaník, who has suffered similar problems in the past. After a major media stir, however, Prime Minister Mikuláš Dzurinda's party, the Slovak Democratic and Christian Union (SDKÚ), backed Kaník and refused to oust him from the Labour Ministry.

The ANO's Rusko said it was up to each individual party to decide what they wanted to do in such cases. ANO Deputy Chairman Ľubomír Lintner shared this view, adding: "I don't want to comment on the matters of other parties because it is always a sensitive issue."

Lintner says that when journalists ask his opinion on whether Minister Kaník should remain as labour minister, he "is uneasy answering those questions".

Other coalition partners tread cautiously upon the issue.

"It is morally wrong to have a person owing a lot of money in top positions, but legally it is all right. I think it is up to the individual parties as to how they deal with the problem," said Gyula Bárdos, the head of the Hungarian Coalition Party's (SMK) parliamentary caucus.

He said, however, that ANO's decision to pull Kačaljak's was correct according to the SMK.

"The decision regarding Kačaljak was right. I think this could become a model for other parties in the future," said Bárdos.

Martin Maťko, the SDKÚ's spokesman, insisted that the SDKÚ would not consider changing its original decision in the Kaník case.

At the end of 2004, members of parliament ordered Kaník to explain his past debts to the assembly. Opposition party Smer has systematically called for Kaník's recall; it has also initiated no-confidence votes in parliament against Kaník.

"I think the SDKÚ as well as SDKÚ voters realize that Kaník is a target of the left-wing opposition party Smer, which opposes the social reforms that Kaník has carried out," said political analyst Grigorij Mesežnikov, the head of Institute for Public Affairs, a think tank in Bratislava.

The independent analyst admitted, however, that "it would be better if a well-known government minister did not have similar problems [with debts] in the past".

"Still, I think the SDKÚ probably evaluated the situation and concluded that a possible departure of Kaník would interfere with its plans for the future," said Mesežnikov.

He points out that replacing Kaník and replacing Kačaljak are two different things altogether.

"Despite his position, Kačaljak was a virtually unknown public persona, while Minister Kaník is a key member of the right-wing cabinet. He is one of the symbols of the current cabinet's reforms," said the analyst.

As labour minister, Kaník is responsible for writing several reform bills in the area of labour and social affairs.

He has headed the ministry's social benefits reform, changed the social and pension systems and introduced measures to motivate the unemployed to work. He is also active in cracking down on illegal employment in Slovakia.