BY 2008, if everything goes according to plan, Slovakia will produce more cars per capita than any other country in the world.
Even though Volkswagen is the only manufacturer currently producing cars in Slovakia, 32 percent of the country's overall exports belong to the automotive industry. 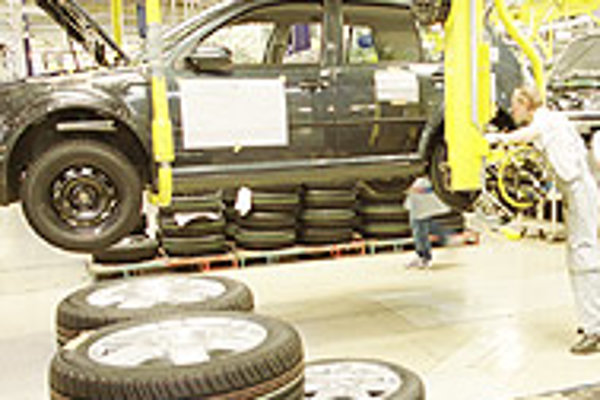 BY 2008, if everything goes according to plan, Slovakia will produce more cars per capita than any other country in the world.

Even though Volkswagen is the only manufacturer currently producing cars in Slovakia, 32 percent of the country's overall exports belong to the automotive industry.

When PSA Peugeot Citroen and KIA Motors fire up their plants in 2007 and 2008, respectively, analysts expect that percentage to rise significantly.

ZAP says that Slovakia must prepare itself for the imminent industry boom by being as flexible as possible, rolling with the ups and downs that the industry naturally brings.

The country must also do its best to keep carmakers in the country for as long as possible, the association maintains.

The automotive industry is responsible for about 23 percent of all foreign direct investment (FDI) coming into Slovakia. The Economy Ministry, together with the Automotive Industry Association of Slovakia (ZAP), expect auto investments to continue. Today, Slovakia's auto industry supports 55,000 employees. In five years, that number should double.

There is no doubt that the auto industry will play a strategic role in the country's economy. Some fear that by focussing on one industry, however, Slovakia opens itself up to unnecessary economic risks, since car manufacturers are so sensitive to global slumps.

"This significant and growing orientation toward one industrial sector represents a risk because it weakens the strategic flexibility of the country," Zdenko Štefanides, a senior analyst at VÚB bank, told The Slovak Spectator.

"Additionally, the automotive industry is quite sensitive to the cyclic nature of the global demand for cars. On one hand, this can be positive in times of expansion, when the demand for cars grows, but on the other hand, during a recession, the Slovak car industry will be negatively hit," he said.

Despite this, most analysts agree that Slovakia stands to benefit more from the automotive industry than it risks losing. Štefanides admits that diversification of the Slovak car industry among three large producers - Volkswagen, PSA Peugeot and KIA - lessens the economic risks associated with oscillating global demand.

Robert Prega, an analyst at Tatra banka, agrees. "There will be three carmakers. The risks will be more spread out compared to today, when only Volkswagen works at its full capacity and makes up 20 percent of Slovak exports. Right now, Slovak foreign trade is dependant on the success of this specific brand."

Marek Gábriš, an analyst at ČSOB bank, acknowledges the risks but emphasizes that Slovakia has time to prepare for them.

"These investments [in the car industry] will be a strong impulse for economic growth in the forthcoming years. During this period we can concentrate on attracting investments from other industries," he said.

Another mitigating factor, says Gábriš, is the low cost of doing business in Central Europe. "The automotive industry in Slovakia is partially protected against recession because carmakers are more likely to dampen production in western facilities where the costs are higher." Gábriš added that car manufacturers are actually luring a number of firms to Slovakia that are not entirely focused on supplying automotive parts.

Tatra banka's Prega pointed out that automotive investments are crucial to the stability of Slovak foreign trade and the foreign exchange market.

"The production of these carmakers will focus on exports. According to the calculations, Slovakia's trade balance should end in a surplus in 2007. Compared to the 1990s when the deficit represented 10 percent of GDP, it really shows a deep structural change in the economy. The auto industry should help the country overcome one of its long-term problems," Prega said.

Štefanides sees the benefit of creating so-called "automotive clusters" in Slovakia. According to him, the industry cluster that is forming now could cut costs and improve logistics, networking and company cooperation. It could even result in the development of higher added value business, for example, research and development.

"We can see that it is already happening. For example, Volkswagen Slovakia cooperates with the Academy of Fine Arts in product design, and the new R&D investments announced by Johnson Controls in Trenčín proves this as well. These cluster benefits and their further development will be crucial to maintain the health of the Slovak car industry even if the low-cost advantage fades away," Štefanides said.

The Automotive Industry Association and the Economy Ministry worked out a SWOT (strengths, weaknesses, opportunities, and threads) analysis of the country's automotive sector.

According to the SWOT analysis, Slovakia's strengths stem from a long-term tradition in the machinery industry, experience with Volkswagen Slovakia, a well built suppliers network and good cooperation between the public and private sectors.

The analysis is not all rosy, however. It shows a lack of qualified assistance, mainly in apprentice-level labour; a weak history of innovation; little or no regional development strategies; unfinished industrial parks and highways; and a growing interest by investors in making green-field investments (not industrial parks) in Slovakia.

The SWOT analysis qualified new, eastern markets (such as Ukraine), the potential of the markets in Poland, Hungary and Bulgaria, the likelihood that Slovak science would support automotive innovation, and the potential for machinery and chemical production in Slovakia.

Many things point to the fact that carmakers would move their production facilities to cheaper markets if given the right incentives. Cheaper car production in Asia and other Eastern European countries coupled with an inability to find skilled labour could be threats.

Nevertheless, the analysis confirms that Slovakia is currently one of the most attractive countries in Europe for industrial investment. The automotive industry as a whole has recognized this.

Estimates from 1999 supposed that annual auto production levels would reach anywhere from Sk160 billion (€4.08 billion) to Sk200 billion (€5.1 billion) over the next decade. So far, that estimate has proven far too conservative.

ZAP and the Economy Ministry estimate that by 2008, Slovakia will produce 150 to 220 cars for every 1,000 people, making it the number one producer of cars in the world per capita.

How does the competition rank?

THE CZECH Republic has been very successful at attracting foreign investments. Several important automotive companies have established production and supply firms there. However, during the last few years, the country has been experiencing market saturation, with the lack of qualified labour a problem. On the other hand, the Czech Republic is reaping the benefits of focussing on research and development after the initial development of automotive production.

Poland, with its big market potential but relatively expensive labour, is not a real competitor to Slovakia and the Czech Republic as far as automobile manufacturing goes. But Poland continues to attract foreign investment. The world's largest automotive suppliers have plants there, and new investors are reportedly pouring into the country daily.

Hungary has market potential but its lack of qualified labour is a competitive disadvantage. Even so, several carmakers (Suzuki, Audi) have set up shop there. Hungary also has strong research bases that are connected to international research centres, which is a competitive draw.

Ukraine has enormous huge potential. Once it solves its political crises and maintains stability, it is likely that automobile production will move there. The low cost of labour, abundant raw material sources as well as its location are attractive for potential investors.

Romania is becoming interesting to investors. Its labour is the cheapest in the region, and the country has a tradition in the automotive industry. However, poor infrastructure and a scarcity of qualified labour make it a long shot.

Bulgaria is another country offering cheap labour. Bulgaria's accession into the European Union is expected in 2007, making it particularly attractive. But Bulgaria does not have the infrastructure or qualified labour to support major investments right now.

Russia has a long tradition in the automotive industry. With low-cost labour, cheap and abundant sources for raw materials and energy and high-tech research centres, Russia would appear to have it all. However, the unstable political system and lack of infrastructure are strong disadvantages.

Estimated number of cars produced in 2008

The projected number of auto production employees in 2008