AMERICAN photographer Michael Robinson-Chavez did not come to Slovakia to snap a few clichéd images of poor Roma - dirty children playing in trash, so common in much western media. Nor did he come to shoot propaganda material on the Slovak Roma and spread it around the world. Instead, he came to live with them for a couple of weeks and shoot what he saw. 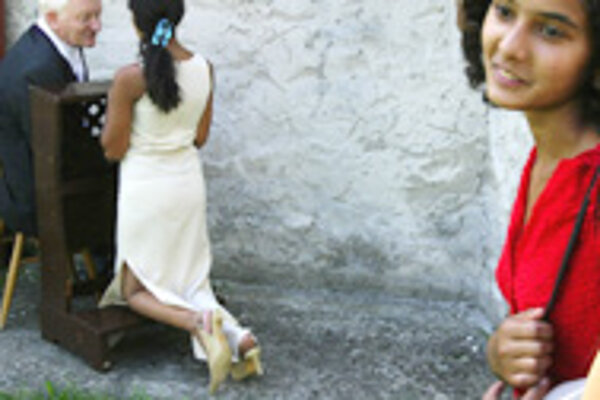 AMERICAN photographer Michael Robinson-Chavez did not come to Slovakia to snap a few clichéd images of poor Roma - dirty children playing in trash, so common in much western media. Nor did he come to shoot propaganda material on the Slovak Roma and spread it around the world. Instead, he came to live with them for a couple of weeks and shoot what he saw.

"Roma in the most infamous places [the Jarovnice settlement and Luník IX housing estate in Košice] are fed up with the photographers who come to snap a few pictures of the dirt and poverty to cause immediate sensation. It does not help to solve their situation in the least," said Kristína Magdolénová from the Roma Press Agency, who answered Robinson-Chavez's request on the project.

In fact, attracted by his honest and humane attitude towards the issue, she was so quick to reply to him that he rejected requests to do similar projects in two other European countries that recently joined the European Union and have considerable Roma minorities - the Czech Republic and Hungary.

"He didn't go after poverty, he went after the real people," said Magdolénová.

He has exhibited throughout the world, including at the prestigious Visa pour l'Image festival in Perpignan, France. He has had shows in Havana, New York City and Washington, DC.

Robinson-Chavez's images talk about happy and joyful people, who celebrate, have fairly good jobs, raise their families and go to church. On the other hand, he also captured the everyday struggle of those with no employment, the non-hygienic conditions they live in and children picking berries and mushrooms to sell.

Currently, his series of 21 photos capturing the life of the Roma is showing in Eastern Slovakia. The exhibition, which was premiered in Washington last year, can be seen in Košice's InfoUSA Centre until the end of April and then moves on to Prešov. The exhibition will carry on until December 10, touring other towns in Eastern Slovakia. The organizers also plan to issue a catalogue including other photographers' images of the Roma.

"The media coverage of Roma one usually finds in western media is not honest. Many Roma live in poor, horrible conditions, they are the poorest of the poor, but there's a lot more," said Robinson-Chavez.

He is one of the most reputable American photographers. He has photographed many military conflicts and disasters over the past several years, the most recent being the Tsunami catastrophe in Asia.

The idea of capturing the life of the Roma originated at the beginning of last year, when there were lots of reports about the upcoming expansion of the European Union. He and his colleague, a reporter, realized that as a result of this enlargement, the Roma would become the largest minority in Europe.

"I was not sure exactly what country I was going to - either the Czech Republic, Hungary or Slovakia. I did research on all countries and sent lots of requests for information. Kristína [Magdolénová] got back to me with lots of statistics and stories - it sounded that coming to Slovakia would be the most productive, that I could immediately meet some of the Roma and get to know them well to make my photographs.

"Moreover, Eastern Slovakia is a part of the world American readers don't know too much about. The Czech Republic and Hungary are known a bit. In that sense it was better to come to a place like Košice and the area around it," Robinson-Chavez said.

His initial idea was to work on a project concerning Roma living in Central and Eastern Europe. The aim was to visit one country every year, stay there for three to four weeks and photograph the life of Roma. Later he decided to focus on Slovakia.

Robinson-Chavez was working on the story for two weeks, living in three different Roma communities. The result is around 800 photos.

"Robinson-Chavez's approach to the Roma issues has been the most serious out of over 70 news staff who contacted us and attempted to portray the Roma life in an unprejudiced way," Magdolénová said.

According to Robinson-Chavez, it was a great experience. "I met all kinds of Roma. They are very generous, very warm, very good-hearted people. They have a lot of issues to deal with in order just to function. And they have the stereotype stigma.

"On the other side of the coin, I found there were many Roma that were expecting to be given everything. Under the Communist regime they were used to receiving many subsidies, handouts, jobs from the state. Today, they don't try to make better lives for themselves and their families; they embrace being victims," said the photographer, who would like to return to the project.

"There's so much more to their daily existence. I know that the stereotypical image is of destitute Roma, naked kids in villages and indeed that exists. I saw some settlements that were in entire poverty and really bad shape. But there's much more than that and that's another reason why I don't think I am finished with the story. There's so much more to photograph."