STUDENTS across the country staged a protest after Education Minister Martin Fronc ordered that they repeat their secondary school exit exams in maths. The decision affects 2,714 students. 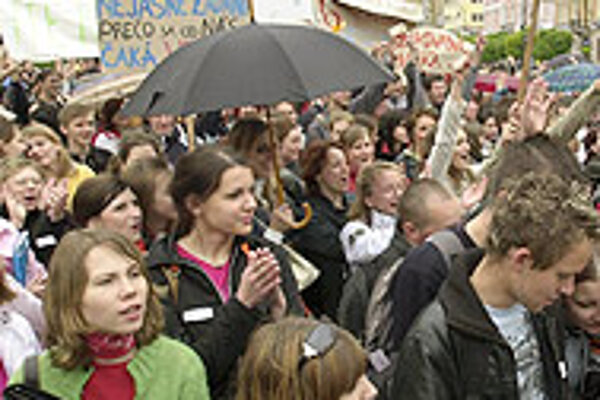 STUDENTS across the country staged a protest after Education Minister Martin Fronc ordered that they repeat their secondary school exit exams in maths. The decision affects 2,714 students.

On test day, April 13, 77 students were accidentally given correct answers along with their test forms. At most schools, teachers noticed the error and removed the answers before handing out the exams.

The minister, a member of the ruling Christian Democratic Movement (KDH), fired five people after a commission identified the State Pedagogical Institute (ŠPÚ) as responsible for the mistake. Among those fired was ŠPÚ Director Vladimír Repáš.

Those students who did not receive the answers are angry that the minister is requiring the student body to repeat the exam. They called on Minister Fronc to resign. Politicians quickly joined the debate.

The KDH's ruling partner, New Citizen's Alliance (ANO), asked the KDH to withdraw Fronc from the post in order to "calm the situation down" in the education sector.

The KDH refuses to withdraw its minister over the affair, however. KDH officials, including Vice Chairman Július Brocka, said that if Fronc stepped down, other cabinet ministers would have to follow suit.

Ľuboš Kubín, a political analyst with the Slovak Academy of Sciences, agrees with the KDH.

"The minister was not involved in any ethical misdemeanour, and his personal integrity was not undermined. The problem arose as a result of a failure of an employee. From this respect, the criteria that calls for resignation were not fulfilled," Kubín told The Slovak Spectator.

Kubín criticized the ANO for calling for Fronc's resignation while ignoring those ministers suspected of unethical behaviour. For example, the Slovak Democratic and Christian Union's (SDKÚ) Labour Minister Ľudovít Kaník, who is accused of failing to pay social insurance taxes while sitting on the board of a company, asked the national social insurer to pardon the late charges.

The test debacle is unfortunate for Fronc. It is the first year that secondary school students have been required to take the exam (called maturita in Slovak) in a new form. The exam introduces obligatory tests in five subjects in three categories of difficulty: A, B and C, with A being the most demanding.

Prime Minister Mikuláš Dzurinda's party, the SDKÚ, issued a statement April 19 that suggested Fronc decide for himself whether he stays or goes.

"The SDKÚ is sorry that due to mistakes of the Education Ministry's institutions, a situation has arisen that casts a bad light on the necessary process of modernization of the educational system," the statement says.

"We understand the feeling of injustice in those students that took the test under the regular conditions but have to repeat it anyway," stated the SDKÚ . The ANO suggested that only those who actually received the correct answers along with their exam (77 students) should re-sit the test on April 26.

Fronc argued, however, that in order for the maturita to be carried out in line with regulations, all 2,714 students must re-take the tests.

A special meeting of the coalition council, a senior political body, was summoned on April 20, the day that several towns reported student protests.

The ruling partners agreed, however, that the test must take place as Fronc decided. KDH Deputy Chairman Vladimír Palko said that the meeting of the coalition council was not necessary, as the decision was in the hands of the education minister.

Despite respecting Fronc's right to decide on this issue, the ruling partners insisted that they thought it unfair that all students must repeat the exams.

Meanwhile, Dzurinda rebuked the ANO for asking the KDH to withdraw Fronc from his post.

"This is not how politics is done. I think this is not correct towards the KDH. We are one ruling coalition," the PM said after the coalition council meeting. He added that the ANO initiative [to recall Fronc] was "a bit populist".

According to analyst Kubín, the ANO's request is merely a reflection of the ongoing disagreements between the ANO and the KDH since the ruling coalition formed. While the KDH is a conservative party advocating strong Christian values, the ANO is liberal and a newcomer to politics.

"Certainly some political prejudices are at work here," Kubín retorted.