Reason to celebrate: Slovakia turns one

"SLOVAKIA's entry into the EU is perhaps the greatest challenge we will go through in our lives," said Speaker of Parliament Pavol Hrušovský on April 30, 2004, when the country entered the European Union.
However, one year later, many Slovaks have only a vague idea of the most urgent issues informing the European discourse. 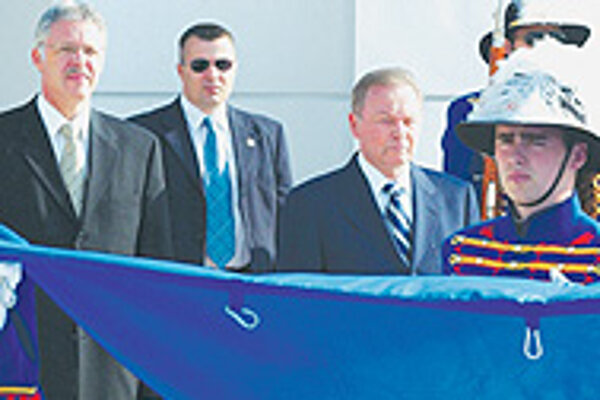 Font size:A-|A+0
"SLOVAKIA's entry into the EU is perhaps the greatest challenge we will go through in our lives," said Speaker of Parliament Pavol Hrušovský on April 30, 2004, when the country entered the European Union.

However, one year later, many Slovaks have only a vague idea of the most urgent issues informing the European discourse.

The first year of the country's membership has not really changed the way Slovaks view issues vital to the future of the EU. The debates on the European constitutional treaty, for example, or entry talks with Turkey are seen as something that does not directly concern them.

"The discussion over [EU] topics is very weak [in Slovakia]. There was some debate over the EU Constitution. Unfortunately, such discussions are often ideologically motivated. I see some progress though, mainly in professional circles. The important thing is to bring such debates closer to the public," Oľga Gyárfášová told The Slovak Spectator. Gyárfášová is sociologist with the Institute for Public Affairs (IVO), a think-tank in Bratislava.

Before accession, many thought the EU would become a scapegoat for Slovakia's problems once the population's enthusiasm for integration vanished. Analysts suggested that as problems grew, more mud would be flung in the direction of Brussels.

Developments have proven those fears unjustified. Support for EU membership has not dropped in Slovakia despite the government carrying out social reforms that have adversely affected the average Slovak's wallet.

"Today, approximately 65 to 66 percent agree with the move and are happy to see Slovakia in the union. This support has been maintained despite the tough social reforms that the government has implemented," Ivo Samson, a policy expert with the Research Center of the Slovak Foreign Policy Association told The Slovak Spectator.

However, due to burnout in the electorate after a surplus of elections, including the EU accession referendum and the presidential race in July 2004, Slovaks have failed to give an adequate performance as EU citizens.

The country earned a distressing European record, posting the lowest turnout ever for elections to the European Parliament on June 13. Only 16.96 percent of eligible Slovak citizens cast their votes.

"The results of the elections in Slovakia are a great disappointment for us," European Parliament spokesman David Harley told the Slovak daily, SME.

"Poland and Slovakia posted an even lower turnout than the United Kingdom in 1999 - 24 percent, which was, at the time, the lowest in the EU15," MEP and Conservative Foreign Affairs spokesman in the European Parliament, Charles Tannock, told The Slovak Spectator in July 2004.

Sociologists also confirm that the elections revealed disinterest, even burnout in EU issues.

"I think happenings in the European Union are still not viewed as something that directly concerns the Slovaks. However, it will take more than one year of membership before the feeling that EU happenings directly concern us takes root in the minds of Slovaks," Gyárfášová said.

In a brief survey conducted by The Slovak Spectator, Ľudmila, 40, a shopkeeper said that EU entry had not really changed her life.

"Perhaps the only change I feel is that we do not have to use passports. Otherwise I feel no changes. Maybe our children feel more after the world opened up for them," she said.

Veronika, a 21-year-old university student in Bratislava, said: "So far, I haven't experienced any major changes in my life. But for the future, young people have an opportunity to travel and work abroad. I have the feeling that in spite of our accession into the EU, Slovakia is still limping behind the other member states and this influences our position within the union."

Andrej, 25, a student at Bratislava City University, feels similarly. He does not register major life changes since accession. However, travelling is important to him. "I want to go to Britain to find work. It suits me that I can work in Britain legally," he said.

According to IVO's Gyárfášová, Slovaks are mostly interested in practical issues linked to EU membership, such as how to get employed in the EU and what kind of documents they need for employment, or how to import used cars from the EU into Slovakia.

A couple of months before accession, some feared that prices would dramatically rise and they rushed to stock up on certain products. Indeed, Slovakia has not experienced any dramatic price revolution.

In fact, household consumption has increased, motivating economic growth. The country posted one of the best economic results in the region.

Slovakia's gross domestic product grew at its fastest pace in eight years, measuring a 5.5 percent year-on-year increase to reach Sk1,325.5 billion (€34.74 billion). The spurt elicited envy from Slovakia's neighbours as well as its more establashed EU relatives. The European Commission expects economic growth of about 5 percent in Slovakia in 2005 and 2006.

This certainly is a favourable boost to help Slovakia fulfil the Lisbon strategy. In order to make the strategy a realistic goal, however, all EU members have to be more disciplined in economic growth. Slovakia is on the right track.

"Slovakia has sufficient economic growth. However, this is not the case with the EU as a whole. In order to achieve this growth, EU countries will probably have to increase the innovation capacity of their economies," Philippe Maystadt, President of the European Investment Bank told The Slovak Spectator.

One of the important EU issues that recently dominated the media was the discussion around liberalizing the European services market. The young EU members found themselves at odds with the original EU members, many of which fear the entry of low-cost foreign competitors into their lucrative national services market.

Slovakia spoke with a decisive voice on the issue, warning that slowing or preventing liberalization would amount to "protectionism".

Slovakia also has taken a lead in speaking in favour of further enlargement of the European Union, even though expansion could be counterproductive for the country. Slovakia supports the future entry of Bulgaria, Romania and Ukraine.

"Slovakia does not want to be on the eastern fringe of the European Union. The security of a country that borders a zone of instability is always threatened. Slovakia strives to be surrounded by the highest possible number of EU countries, which is why it is a pioneer when it comes to pressing the EU to open its doors to new members. If Ukraine joins the EU, it will certainly stabilize the country sooner," Samson said.

During the first year of EU membership, Slovakia has learned a few important lessons: efforts to renegotiate the accession treaty will not be tolerated by the country's EU partners.

Economy Minister Pavol Rusko had hoped to delay the closedown of reactors 1 and 2 of the V1 nuclear power plant at Jaslovské Bohunice and switch them off simultaneously in 2008. However, European Energy Commissioner Andris Piebalgs made it clear on April 8, 2005, that the accession agreement is binding. The reactors must be turned off by 2006 and 2008, respectively, in line with the EU Accession agreement.

Although deep economic gaps divide Slovakia's eastern and western regions, local politicians are well aware of the opportunities that EU funds represent. Slovakia has made progress in tapping these funds.

When asked to evaluate Slovakia's progress in this area, Ana-Paula Laissy, spokeswoman for the Commissioner for Regional Policy, told The Slovak Spectator: "Significant progress has been made in completing the institutional arrangements for implementing the structural funds programmes. Progress in this area has laid a good foundation for actual project activity to be implemented on the ground."

As to how Slovakia is absorbing the allocated money, Laissy said that the "advance payment in the amount of 10 percent of structural funds allocation in 2004 and 6 percent in 2005 helped to pre-finance project development."

She concluded that 2004 grant allocations, particularly in the public sector, would "only translate in actual expenditure on completion of projects in the latter part of 2005 and in 2006."

New EU members can serve as an example and a voice of experience, agreed participants of a recent international conference in Bratislava organized by the Prague Society for International Cooperation, the Global Panel Foundation and the American Foreign Policy Council in cooperation with IVO.

Slovakia's 11-year journey to becoming an EU member gives it unique insight, enabling it to provide a new view and understanding of Eastern Europe that Western Europe lacks. Slovakia, like other new members, can differentiate between real problems and excuses, several speakers of the conference pointed out.

Magdalena MacLeod contributed to this article.