WHEN Marc Ellenbogen speaks, his words tumble out fast. It's a good thing, because the energetic, forty-something public policy expert has a lot to say. He is chairman of the Global Panel Foundation and president of The Prague Society, making him the leader of two important organizations that influence international decision makers on political, social and economic issues. 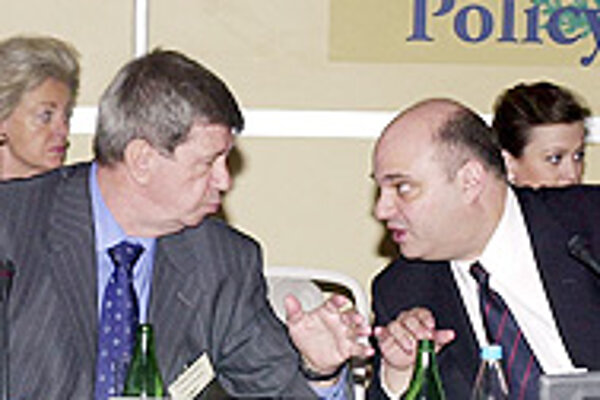 Font size:A-|A+0
WHEN Marc Ellenbogen speaks, his words tumble out fast. It's a good thing, because the energetic, forty-something public policy expert has a lot to say. He is chairman of the Global Panel Foundation and president of The Prague Society, making him the leader of two important organizations that influence international decision makers on political, social and economic issues.

A one-time foreign policy advisor to former US Vice President Al Gore, Ellenbogen is comfortable speaking his mind in official circles. He is dismayed that Central and Eastern European governments are largely ignoring the oppressive regime of President Alexander Lukashenko in nearby Belarus: "Where is the world community on the question of Belarus? Why isn't there an outcry?"

Ellenborgen was in Bratislava for two days in mid-April as a moderator for the Transatlantic Drift Debates. The Slovak Spectator caught up with him the night the conference concluded, to talk about issues facing Slovakia and the European Union.

The Slovak Spectator (TSS): Some experts say that Slovakia is more "western" than its Western European neighbours. Do you agree?

Mark Ellenbogen (ME): I agree in terms of certain sectors. I agree when they talk about economics and when they talk about free markets. I don't necessarily agree in terms of stability of government or how the educational system is set up. But if you mean more western in the sense of a liberal model with free markets, low taxes, few hierarchies, privatizing socialized medicine, then it's clear that countries like Slovakia that have broken away from the former Soviet Union's power grip are more "western".

You have to look at it in context. I think Central and Eastern European countries were more easily able break away from Communism after 50 years than countries like Germany and France. After the war [WWII], those countries spent 30 to 40 years painstakingly building up a social market economy because of what they lost during the war. People lost their nest eggs and that's what families thought of: let's set up a nest egg and make sure that there's a future.

A liberal, free market economy doesn't look at it that way. It says, "Hey, you're responsible for your own nest egg. You can't expect us to protect you from cradle to grave." In this type of market economy you need to take care of yourself. You have to pay your own bills and your own rent. You have to worry about your own health and education. The same is true for social security and hospitals and medicine.

It's clear to me that a Slovak or Czech or Bulgarian or Slovenian is going to be able to accept a liberal market economy more quickly than the Germans or French who spent 40 years deliberately building up a huge social state.

TSS: The Slovak government has expressed interest in helping democracy take root in the Balkans and Ukraine. Still, there is anxiety over stepping on Russia's toes. What role do you think Slovakia should play in the European Union in regards to former Soviet states?

ME: If you ask Slovaks, they'll tell you that they understand the former Soviet states. They understand Ukraine, Belarus and Georgia, and they certainly understand Hungarians and Germans and Austrians. If we take them at their word, and I do, I think Slovakia can be what I call the O ring.

O-ring erosion is why the space shuttle blew up in 1985. That O ring was the difference between billions of dollars of equipment staying together or exploding. If you take small Slovakia in an economic context, then it is like an O ring. Small countries like Slovakia don't realize their impact. If you look at an aircraft carrier or a big ocean liner, one wrong bolt may sink the ship. All it takes is a little bolt. For me, five million Slovaks in a small country with a flexible economy and a flat tax, that knows and understands the Russians, is important.

Slovakia was the first Central or Eastern European country to go to a flat tax. That is something people are looking at. Did it generate a stronger economy or improve economic outlook? Has it improved the amount of money coming into the economy? Is it increasing the funds Slovakia has to provide social services? In that way, Slovakia is an example.

It isn't necessarily the case that a small country has to play a passive role, though. If you take countries like Denmark, Norway and Sweden, which are countries that have between five and nine million people, they are active. But they aren't active in terms of big troops and military. They are active in other ways. I don't think that just because Slovakia is small is has to be passive.

TSS: Do you think the Balkan states are mature enough to enter into the EU at this point?

ME: I think the answer is no, not at this point, although I think in the future they will be. You have to define what you mean by the Balkans - there are a lot of conflicting borders. But I don't think the people of the Balkans are capable of being in the European Union right now. I think what's missing is the experience of having set up a democracy, of having set up economies. Once they do that and sustain it, then they'll be ready.

TSS: It is said that all trade between Russia and EU frontier states had ground to a halt after the last EU expansion. In your opinion, what prevents Central and Eastern EU member countries from exploiting the trade potential that Russia offers?

ME: Unfortunately, there are some problems within the Russian economy. First of all, there was a lot of trade that continued after the fall of the Soviet Union between Slovaks and Russians, Ukrainians and Russians and Czechs and Russians. If you move beyond things like oil and raw materials, which Russia produces at a very high rate, there were lots of contracts that existed after the fall of the Soviet Union that countries like Slovakia felt bound to honour.

But if you look at these contracts, they were for old planes, old weapons, or production equipment that just doesn't pass muster nowadays. As a result, two things happened. One, Central and Eastern European countries started looking for the best product at the lowest price, which wasn't necessarily Russia. Second, as they moved to become members of the European Union, they wanted to support the union they were entering and so they looked for goods produced by the EU. Your average EU country asks itself, "Am I going to pay a little bit more for the same product and therefore support the EU?" The answer is yes. In that respect, Russia lost out.

Does Russia have potential? I think so. Basically if Russia can achieve some stability and if there was a sense within western economies that President Putin would support a free and fair economy, that Yukos is an exception, then things might turn around. For a while, investments were dramatically going up in Russia. But for the last two years, with Putin going after Chodorkovsky, a lot of Germans pulled out their investments. German investment in Russia went down by €400 million.

TSS: What do you think Slovakia's approach to Russia should look like?

ME: I think it has to be economic. Slovakia can't compete with Russia in terms of size and population, so it has to look at the areas in which it can succeed. Number one, I think a lot of Russians would like to come to Slovakia. They'd like to invest. Business people buy property. Having said that, I think you have to have rules that don't allow just any corrupt person to buy up good property in Slovakia with Mafia money and sources that are not legal.

Besides tourism, Slovakia can focus on education. Getting young Russians to Slovakia to study, getting medical staff to come and work in the hospitals, maybe even getting Slovaks to go to Russia is a good idea. For a long time Slovaks and Russians swapped skilled labour prodigiously. Since the fall of Communism, young people have forgotten this.

Slovakia is actually a big investor in Russia. Not in the amount of money it invests but per capita. That's true for Slovakia in the Ukraine as well.

TSS: There seems to be a universal agreement among European countries - especially Western ones - that, starting with George Bush's second term, Europe and the US are friends. What is your take on that?

ME: I don't agree with that. I think there's a lot of damage that's been done behind the scenes. It's true that Condoleezza Rice did a charm offensive in Europe. In an article I wrote for the Washington Times I said that I thought that Bush's second term would actually be more of the compassionate conservatism that Europe expected from him in his first term. What I mean by that is that every president wants to leave a legacy. He wants to leave office being liked. That's true of most politicians. So now he's going on this kind of beauty contest around the world saying, "You can really like us after all." Whether this is truly a change or a façade remains to be seen.

TSS: What is the reason for pessimism around further EU expansion after the last big one in May of 2004?

ME: It's a type of depression after euphoria. Take getting married, or anything life changing act. All of a sudden it's over. Take West Germany merging with the DDR [East Germany]. The euphoria of the day is gone and now more than 42 percent of all East Germans regret the unification of Germany.

The other problem is that a lot of countries feel like they might have lost their identity. For example, Slovakia, Ukraine, Latvia and other countries had to reintroduce farm subsidies in order to become eligible for the European Union, although they had already gotten rid of them.