Could this be the last time?

THE 2005 Beltine festival, Slovakia's night of the Celts, is drawing near. From the previous four years people have learnt to expect the best in Celtic music, live demonstrations of traditional rituals and crafts and lessons in dance and martial arts. What makes this year different is that this could be the last time. 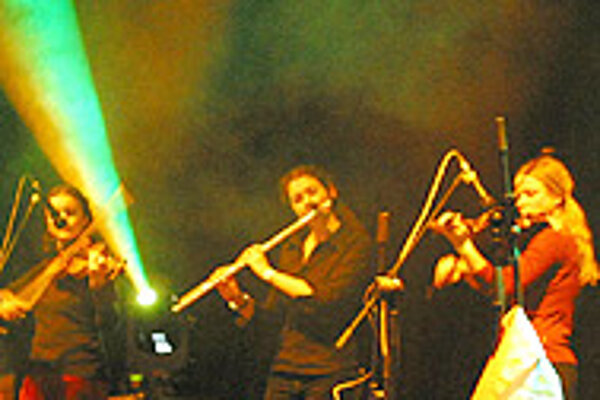 Font size:A-|A+0
THE 2005 Beltine festival, Slovakia's night of the Celts, is drawing near. From the previous four years people have learnt to expect the best in Celtic music, live demonstrations of traditional rituals and crafts and lessons in dance and martial arts. What makes this year different is that this could be the last time.

"It's like with the five-year [economic] programmes during Communism," smiles the festival's organizer, Roman Kozák. "I fulfilled it." Before long, however, his smile drops and his face turns serious.

The Beltine festival has annually attracted around 2,000 people, but the constant organizational and financial struggles have exhausted Kozák. He had to change the event's venue because of a disagreement over parking fees and interference in sponsor agreements. He moved the festival from Červený Kameň castle to Revištské Podzámčie, near Žarnovica.

Such disagreements and changes are an irritation, but the organizers say that the Beltine has come up against resistance in the Slovak media to Celtic-inspired music and Celtic heritage. This is somewhat surprising as Celtic culture is part of Slovakia's heritage.

Year on year he imported "The Rolling Stones of the Celtic music world" to Slovakia, but radio stations have remained deaf to this kind of music. Kozák has kept journalists informed about the event, but few of them have attended Beltine or even mentioned it in their columns.

Despite the lack of enthusiasm from the press, the Celtic cultural event has retained a core audience. They travel to the festival from all over Slovakia and beyond. Some stay overnight; some combine it with family trips.

"I don't know anybody who would not want this festival," said Tichomír Ivan of Tuatha de Dannan, an historical fencing group.

The recently formed group, whose name means "people of the goddess Danu" (who are believed to have sailed into the mists of Ireland around 1894 BC) is helping to organize the festival this year.

But like everyone else, they do not have a recipe for saving the Beltine tradition in the long-term, or even next year.

The chance to celebrate Celtic culture with the best Celtic music and performances of Celtic rituals within the Slovak borders comes on Saturday, April 30 to Sunday, May 1 on the island and area of Revištské Podzámčie, near Žarnovica. Starting at 20:00, it will offer a non-stop 16-hour programme.

This year the headliner will be one of the world's best players on Irish bagpipes, John McSherry, who arrives with his band At the First Light. The band Run will bring Celtic music from the Spanish Asturias.

The Czech-Slovak band Keltieg, which is also the festival's organizer, invited Polish outfit Beltaine, Czechs' Marw and Shivers, and international-Slovak bands Irish Rose, Roc'hann and Banda. Along with the music, visitors can watch as well as learn Irish, Scottish and Breton dances.

Since Celtic musicians have a passion for playing, after appearing on the main stage they will gather in a Session Tent for unofficial jam sessions. There is also a Celtic Chill Out Tent featuring relaxing Celtic music complete with water pipes.

Tuatha de Dannan will erect a typical Celtic settlement to perform the traditional "resting of the warriors". Visitors can try historical weapons, have their bodies painted, and watch imitations of Celtic rituals and demonstrations of coin making and smiths' works.

They can learn to pour cider the right way, taste pumpkin meals typical for the Žarnovica region, and wash it down with medovina (alcoholic honey drink), Jameson's Irish whiskey and Kelt beer. A night cinema will screen a movie with a Celtic theme.

Slovaks can learn more about their own as well as the world's Celtic heritage during a discussion with archaeologist Karol Pieta, who will present some new discoveries in the field.

The morning "bagpipe wake-up call", with four different kinds of bagpipes amplified through a loudspeaker system, will remind sleepyheads that the celebration continues until noon.

WHAT: Beltine festival.
RUNS: April 30 from 20:00 to May 1 noon.
ENTRY:Sk100 to Sk300.
WHERE: Revištské podzámčie is some 130 kilometres northeast of Bratislava, towards Nitra. The route to the festival's area will be signed and a shuttle will run from nearby Žarnovica. The
festival's area is open from 17:00.
Parking and camping space is assured.
WEBSITE: www.beltine.sk