The GHOST and Spirit festival has been luring visitors to romantic Bojnice castle in central Slovakia for more than a decade. Every year there is something new and it seems the castle's inspiration for fresh and haunting ideas will never stop. 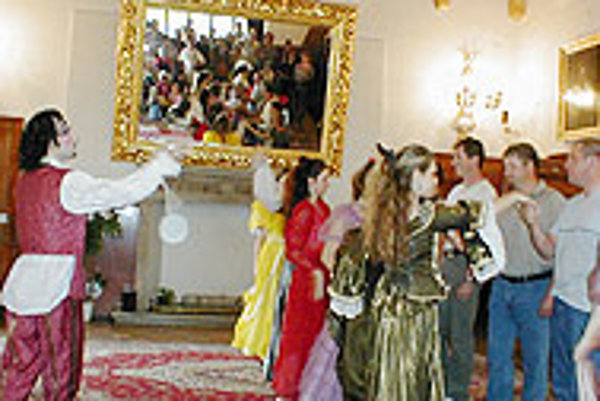 Font size:A-|A+0
The GHOST and Spirit festival has been luring visitors to romantic Bojnice castle in central Slovakia for more than a decade. Every year there is something new and it seems the castle's inspiration for fresh and haunting ideas will never stop.

"The castle has been here for 11 centuries and its history is a deep well of interesting tales," says Sylvia Maliariková, the festival's director. "Thanks to the castle's ever continuing inspiration it is not that difficult to come up with a new story, but we do need a creative team to make it come alive."

The visitors themselves are one reason to come up with fresh ideas each year. Many return to the festival again and again. Some have even attended all 11 Ghost and Spirit festivals.

This year the festival will revive the myth of the Black Lady for several days in a theatrical performance called The Horror Legend, which will be played throughout the castle's many rooms.

"A company of wedding guests will come out of the castle to join young Noffry's wedding feast on Hurbanovo square. The scene will portray their real happiness. The newlyweds will not yet suspect that their lives are soon going to be marked by great tragedy," says the performance's scriptwriter and director, Monika Gerbocová.

Gerbocová found inspiration for the story from the 15th century when the Italian family of Noffry lived at the castle. At that time, the sad legend of the Black Lady originated.

"It's a tale that has been alive in Bojnice for centuries," says Maliariková.

She explains that the special arrangements, effects and performers dressed up as the story's many characters will induce the "darkness" of medieval times.

The crowds of visitors, which regularly reach around 20,000, will awaken the castle's ghosts. They will arouse the dark passions and evil natures that wicked relatives used to ruin the life of the beautiful lady of the castle when her master was absent. Following his return from fighting the Turks in the invasion of 1443, horrific things were revealed.

During the 90-minute walk through the castle's dark corridors and creepy chambers, visitors will encounter masters and their mistresses, servants, squires, executioners, judges, clowns, and an assortment of kind-hearted and crafty characters. These are played mainly by young amateur actors, though some are also seasoned professionals. The organizers promise flexibility and shorter queues at the castle gate than at previous festivals.

"The legend will be presented in a mysterious way so the visitors have a strong emotional experience. Many will feel happy to live in these times when they escape the castle to the adjoining French park," says Maliariková.