CALLS for resignation continue to pursue Education Minister Martin Fronc after angered students kicked off what has become a scandal in this year's secondary school exit exams. 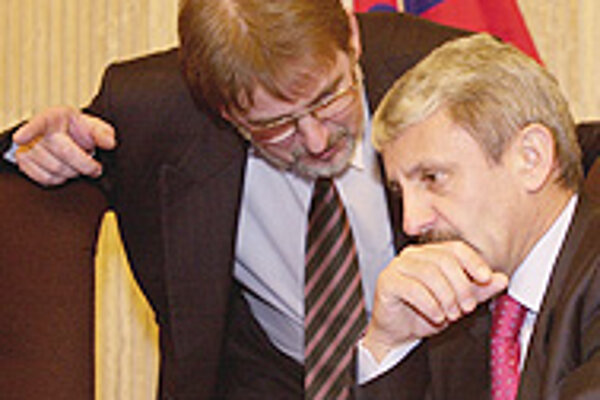 Font size:A-|A+0
CALLS for resignation continue to pursue Education Minister Martin Fronc after angered students kicked off what has become a scandal in this year's secondary school exit exams.

The opposition party Smer, sedulously calling for the recall of several individual ministers including Fronc, is taking its initiative one step farther and adding Prime Minister Mikuláš Dzurinda to the list.

While analysts and ruling politicians consider Smer's campaign against Dzurinda unrealistic, they are not so sure if Fronc will survive the opposition's threat.

Fronc suffered a fall from grace when faulty tests were distributed to students sitting for their maths exit exams. The test forms included the correct answers. Fronc ordered that all 2,714 students should repeat the exam, a decision that incensed thousands of students. Only a minority of those who sat the exam received the faulty test forms.

The retakes occurred without any mishap, although students expressed protest by dressing casually for the examination. Some wore tracksuits.

A small group of radical students are continuing to exert pressure on Fronc to resign, which he has refused to do. But recent signals from the ruling coalition indicates that Fronc's position is not safe.

One of the four ruling parties, the New Citizen's Alliance (ANO), has been openly critical about Fronc for some time. The problem reached its peak after Fronc clashed with ANO's nominee, Deputy Education Minister František Tóth. The disagreement ended in Tóth leaving the Education Ministry.

According to ANO's deputy chairman, Ľubomír Lintner, ANO is "not sure that he manages his job". If ANO manages to initiate a no-confidence motion against Fronc, "ANO MPs would not give him their confidence," Lintner said.

However, ANO is more interested in sending a clear signal than ousting Fronc. The deputy chairman said that if it looked like enough MPs would vote against Fronc, "ANO would refrain" from voting.

"We would like to show our opinion but at the same time, bear in mind that we don't want to break the ruling coalition," Lintner said.

The opposition Movement for a Democratic Party (HZDS) has indicated that it might file the no-confidence motion against Fronc depending on how the minister answers some questions that MPs belonging to HZDS have prepared for him.

Grigorij Mesežnikov, head of the Institute for Public Affairs in Bratislava, says that Fronc's position is "not so certain" because a large portion of independent MPs would support his recall, given that he is currently so unpopular.

The opposition Smer party's rally to recall PM Dzruinda would not come so easily, according to Mesežnikov.

Just after Smer's national meeting in Regetovka near Bardejov on April 23, party boss Robert Fico said that recalling Dzurinda was a "top priority". Fico said Smer would propose the recall at the upcoming parliamentary session in May.

"There are very serious reasons for his recall. The right-wing politics of Dzurinda's government is a true fiasco," Fico told journalists. According to Fico, Dzurinda avoids dealing with local problems or meeting with local politicians and instead "pretends that he is busy solving international and global issues".

Mesežnikov is convinced that Smer's initiative is no real threat to the prime minister.

Even HZDS chairman Vladimír Mečiar called Fico's initiative a "pure media game". He accused Fico of secretly sending one of his Smer MPs to Dzurinda to negotiate possible support for Dzurinda's potential third term in office. The next parliamentary elections will be held in the fall of 2006.

Mečiar's accusations are not proven and all involved deny the information.

According to ANO deputy Lintner, Smer's initiative to sack Dzurinda "absolutely lacks the traces of any possible step two" should the party theoretically achieve their goal.

"Smer does not have any plan whatsoever [if Dzurinda was recalled], nor has it sufficient support to build a new government. This is just Smer's attempt at destabilizing the current situation and a gesture for the voters," said Lintner.

"I think even Smer knows that its campaign is unrealistic," he said.

Lintner also suggested that Smer's recent initiative, like the HZDS's similar initiatives in the past, are "just competition between the two opposition parties for who is the leader of the opposition forces".