TRENČÍN - Jeers and derisory whistling followed the Slovak national hockey team off the ice on April 27 after their last exhibition game before the 2005 World Championship in Austria - a match they lost 3-0 to Sweden in a lacklustre performance. 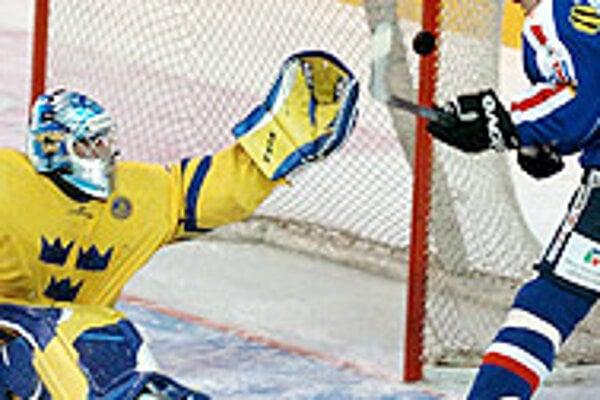 Font size:A-|A+0
TRENČÍN - Jeers and derisory whistling followed the Slovak national hockey team off the ice on April 27 after their last exhibition game before the 2005 World Championship in Austria - a match they lost 3-0 to Sweden in a lacklustre performance.

The capacity crowd of 6,150 had contained their impatience most of the evening, but after their team squandered a two-man advantage late in the game down 2-0, without even registering a shot on net, the frustration spilled over.

"I believe that we are saving our goals for the tournament," said Slovak assistant coach Ľubomír Pokovič after the match.

The Swedish team jumped out to a 2-0 first period lead with goals by Magnus Kahnberg and Thomas Rhodin, and then smothered the Slovak attack with a sophisticated defensive game.

The loss was the third in a row for the Slovaks ahead of the April 30 to May 15 championship tournament, and the fourth in a row to Sweden on home ice.

"It was a great result for us," said Swedish coach Bengt-Ake Gustafsson. "The Slovaks wanted to win, but we played more as a team. This Slovak team is a very good one, and it's a good signal for us to be heading into the tournament after such a win. We can't settle for anything less than the gold."

Slovak netminder Ján Lašák, the hero of the 2002 World Championship in Sweden when Slovakia won gold, disputed the vocal judgement of the fans.

"I don't think the result was that bad, we had a ton of chances and we could have won 4-2," he said.

On the other hand, the first two Swedish goals were due to defensive errors by Team Slovakia, while Slovak star defenceman Zdeno Chára took four penalties in the match. The game was the last chance for Slovak coach František Hossa to try out line combinations and reduce Slovakia's roster to 23 players for the tournament. Starters Ľubomír Višňovský, Martin Štrbák and Michal Handzuš all sat out, while defencemen Jaroslav Obšut and Richard Stehlík were cut.

Nagy, injured after taking a thunderous open-ice hit, was injured and remains in question for the tournament.