BRATISLAVA, Pressburg, Pozsony, Prešporok. All are names for one city, the Slovak capital, which lies close to the borders of Austria and Hungary. They are evidence of the city's multi-lingual past and the title of an exhibition currently running at Pálffy Palace. 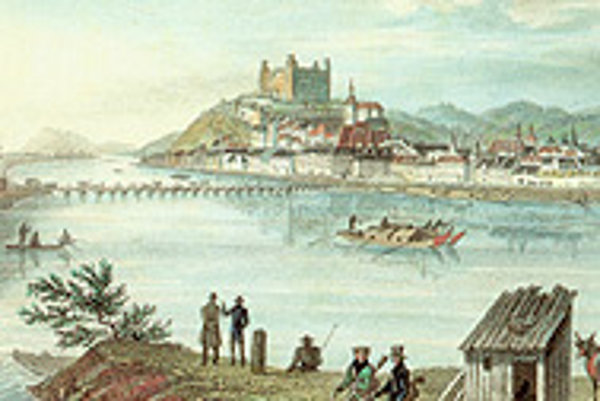 BRATISLAVA, Pressburg, Pozsony, Prešporok. All are names for one city, the Slovak capital, which lies close to the borders of Austria and Hungary. They are evidence of the city's multi-lingual past and the title of an exhibition currently running at Pálffy Palace.

The exhibition, reffered to by Bratislava Deputy Mayor and historian Štefan Holčík as a "family album" of the city, displays works depicting the Slovak capital and its changes from the end of the 18th century until around the middle of the 20th century.

"It helps us to imagine the previous faces of the city," he said. He also added that 90 percent of Bratislava's residents are not original inhabitants, thus for many the exhibition reveals new aspects of the city they have assimilated with.

For some of the visitors, the more than 100 graphic works, paintings and tempera drawings illustrate the transformation of the provincial city into a modern capital. For others, mainly the original, more nostalgic citizens, they bring back an image of the "lost city", where every citizen spoke three languages - Slovak, Hungarian and German.

The pictures also recall lost places in the city, as well as those that have survived the construction rush and remain to enchant us to this day. They help people imagine the town as it once was and to trace its topography in their minds.

One of the works shows the National Hotel, which we now know as the Carlton. Another image captures the Danube River before it was reined in, meandering through the inland delta. Other pictures show the Jewish synagogue near St Martin's Cathedral, which was demolished during the construction of the New Bridge (Nový Most).

The pictures, all from the collection of the Bratislava City Gallery, also show further aspects of the city's history.

Prešporok, or Pressburg in German and Pozsony in Hungarian, enjoyed the status of capital of the Hungarian Empire for around 250 years, during which 19 kings and queens were crowned. The most famous of these was Empress Maria-Theresa, whose coronation was in the late 18th century.

Following the relocation of the central institutional bodies to Buda (now Budapest), Prešporok started to exude the calm life of a provincial town. Its glory days were over.

The burning out of the castle that stands on the hill above the city in 1811 was symbolic of its decline. The ruins of the castle made it onto vedutas - detailed, largely factual pictures of a town, city or other place. For the whole 19th century the castle was a deteriorating testament to the bygone glory days.

To a certain extent the city compensated for its losses through economic development, largely due to its strategic location. In 1831, a shipping company providing regular transportation on the Danube River was set up. A while later railways were built to connect Prešporok with Trnava and Sereď, and then also with Vienna and Budapest.

Another wave of development arrived after 1919 when the city was renamed Bratislava and became the capital of Slovakia.

The traditional vedutas on display, created by Jakob Alt, Jozef Lántz and Franz Sandmann, depict typical views from the south and from the north of the city as well as entire panoramic sweeps of the city that stretch to the horizon.

Later works by Rudolf Alt, Vincenz Reim and Anton Strohmayer give a picture of Bratislava's "interior", portraying its individual buildings as well as the new appearance of its squares.

Apart from local Central European artists working mostly in Vienna or Budapest, painters and graphic artists from more distant countries, for example Germany, France and England, also came to Bratislava. They created pictures for longer series that were published in large editions.

After the arrival of photography in the late 19th century the character of topographically exact pictures was substituted with more expressive images.

This enabled painters, for example Richard Lux, Emil Ranzenhofer or Karl French to let their imaginations loose and use more demanding graphic techniques more suitable to a lyrical view of attractive recesses in the city.