THERE are many stories which caution against a wandering heart, but few are as charming as La Sylphide, the romantic ballet in two acts that premiered at the Slovak National Theatre the weekend of April 22. 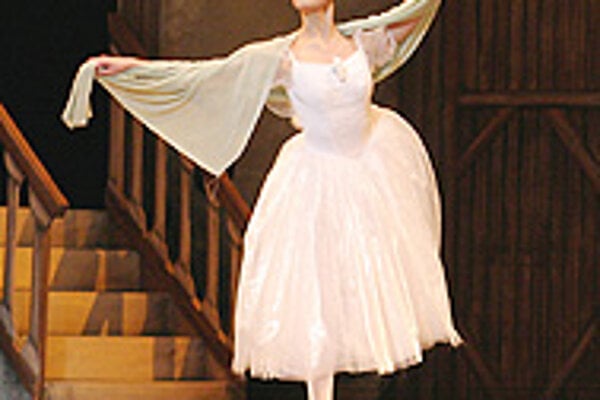 THERE are many stories which caution against a wandering heart, but few are as charming as La Sylphide, the romantic ballet in two acts that premiered at the Slovak National Theatre the weekend of April 22.

August Bournonville's choreography is energetic, bouncy, plot-driven, full of graceful port-de-bras and fast-paced footwork, all of which is meant to contribute to the artistic whole rather than the virtuosity of individual performers. This style is a step in a different direction for the SND, which often features more athletic, Russian-inspired choreography, such as its productions of Spartakus, Rasputin, and Le Corsaire.

La Sylphide actually has two versions: a French and a Danish one. The French version was choreographed by Filippo Taglioni to a score by Jean Schneitzhoeffer and premiered at the Paris Royal Academy of Music in 1832.

Soon after, Bournonville wanted to restage the ballet in Copenhagen, but didn't have enough money to buy the score, so he hired young Norwegian composer Herman Severin von Lovenskjold to write a new one. Bournonville then created new choreography and premiered it at the Copenhagen Opera in 1836. That is the beloved version known today.

Act I begins in a Scottish village just before James and Effie's wedding. James appears happy, but has become distracted by the Sylphide, a beautiful and charming spirit who dances to him, then disappears. Gurn, a young

man who is also in love with Effie, tries to prove James's unfaithfulness, but Effie won't be persuaded, even after Madge the witch predicts Effie will marry Gurn instead. As the wedding approaches, James takes out the ring, but the Sylphide appears and steals it. James runs after her.

The orchestra, led by Rastislav Štúr, sounded tired and timid at first, but was rejuvenated by its soothing violin solo, which was played with fluidity and smoothness. The scenery, designed by Josef Jelínek to appear sensible, domestic, and cozy, was cleverly symbolic of all James turned his back on when he ran after the Sylphide.

Tamara Meladze (Sylphide), who alternates the role with Klaudia Bitterová, often landed too hard for the light-footed Bournonville style and should have been more coy, flirtatiously luring James closer before dancing away.

Jozef Dolinský Jr (James), who alternates with Roman Novitzky, performed better than ever, and looked thinner and more graceful, despite still lacking somewhat in balance and elevation. Adrian Ducin (Gurn) was strong and

sturdy with excellent control and made the most out of a role that's mostly pantomime. Katarína Kaanová (Effie) was cute and enjoyable.

The most high-spirited and visually exciting part of Act I was the Scottish dance known as a Highland Fling. The cast's multi-coloured kilts, also designed by Jelínek, twirled and mixed as they kicked their feet and bounced joyously. The dancers' timing was excellent and the visual patterns impressive.

In Act II, James has chased the Sylphide into a forest, but just can't catch her. Out of desperation, he accepts a scarf from Madge to capture the Sylphide, but the scarf has been dipped in poison, so when he wraps it around the Sylphide's shoulders, her wings fall off and she slowly dies. James is heart-broken and falls to the ground, only to hear the wedding procession of Gurn and Effie off in the distance. Madge laughs deviously at her triumph.

Meladze gained grace and flexibility during the second act and demonstrated real drama during the Sylphide's dying scene. Her outstretched arms shook with controlled emotion as she bouréed toward the audience, sank to the floor, and became motionless. The scene was extremely effective and brought the audience onstage with her. Dolinský also pushed himself further in this more dramatic part of the story, building his momentum to leap higher, yet still landed out of position.

But the real show-stealer was Kvetoslava Štefeková (Madge), who alternates with Simona Bartošková. She moved deliberately and milked her wicked role for all it was worth. She was animated, full of energy and communicative.

La Sylphide is short, yet artistically dense and visually impressive, which makes for a wonderful evening.