AS THE MAY parliamentary session approaches, Education Minister Martin Fronc is scrambling to find coalition support for his education reform bill. Meanwhile, pressure is building against the minister that may end in his recall. 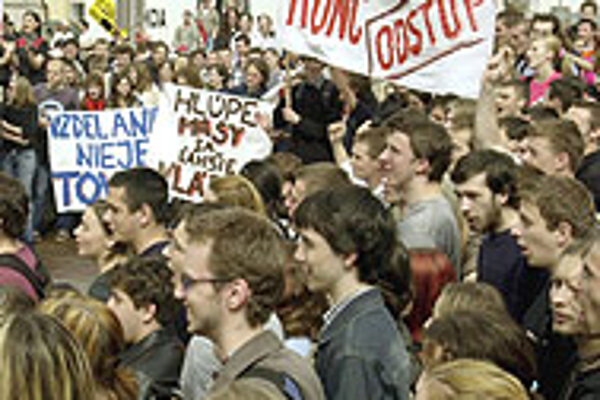 Font size:A-|A+0
AS THE MAY parliamentary session approaches, Education Minister Martin Fronc is scrambling to find coalition support for his education reform bill. Meanwhile, pressure is building against the minister that may end in his recall.

Slovak opposition parities are uniting behind a no-confidence initiative organized by Smer that would oust Fronc from his position. The ruling coalition remains split over their support for the increasingly unpopular minister.

Coalition parties left a May 3 meeting in disagreement about whether or not to back Fronc. While three of the four coalition parties issued statements guaranteeing support for the minister in a no-confidence vote, the New Citizens Alliance (ANO) refused to make a decision either way until May 9.

The ANO is Fronc's staunchest critic in the coalition. Its indecision is in direct conflict with the remaining coalition parties that agreed to back the minister: the Slovak Democratic and Christian Union (SDKÚ), the Hungarian Coalition Party (SMK) and Fronc's own party, the Christian Democratic Movement (KDH).

However, the ANO has said that it does not want to jeopardize the cabinet because of an education minister it does not trust.

"I think that Minister Fronc is not worth [risking] the fall of the government and subsequent early elections," ANO Deputy Chairman Jirko Malchárek said after the coalition meeting.

ANO will not comment on the issue until it makes its final decision.

"We agreed that we will say more after our May 9 talks," said ANO Chairman Pavol Rusko.

Meanwhile, the forces demanding Fronc's recall are building up.

The major Slovak opposition party, the Movement for a Democratic Slovakia (HZDS), joined Smer's initiative to recall Fronc May 3.

The opposition maintains that Fronc should leave his post because he has failed to perform his duties as minister. The recent fiasco surrounding secondary school exit exams has only prompted further calls for the minister's recall.

The opposition is against the minister's plan to introduce tuition fees for university education. The question of fees will be discussed as part of a law on student loans that parliament is reading for the second time in the upcoming May session, starting May 10.

Along with the tuition fees, Fronc is proposing a new system of social stipends so that students from poor backgrounds are not penalized by the reform.

The student community is split over the reform as well as the minister's recall. Students from both camps announced that rallies would take place in several Slovak towns.

Fronc's proposals regarding tuition fees promise to ignite a fiery debate in parliament; MPs already submitted around 100 changes to the draft law.

Fronc says he is open to discussion and admitted that he is willing to incorporate some of the MPs changes to his proposal.

He believes that the law will be passed and consequently bring about increased quality and competitiveness to Slovak universities.

"The law was on hold at a red light for a long time, and after the passage in the first reading [during the March parliamentary session] it sits on orange. It is now time that it gets the green light," the minister said at a press conference May 3.

Some MPs say that schools should be given the authority to charge students for education or supply it for free. They propose to give schools the right to charge zero to 30 percent of the annual expenditures per student.

The minister said he was ready to leave the low limit at zero. The opposition maintains, however, that Fronc's reform is bad in essence and will have a negative impact on many students.

The HZDS also said that should Smer's initiative to recall minister Fronc fail, it would submit another motion itself.

Smer maintains that the coalition's right-wing cabinet policies must stop. The opposition party accused the PM of not paying enough attention to domestic problems and focussing exclusively on the international arena.

Besides the HZDS, Smer has support for its recall initiative against Dzurinda from several opposition parties, including the KSS and the Free Forum.

Free Forum chairwoman Zuzana Martináková said, however, that rather than an early election, her party was in favour of reshuffling the government, should the prime minister be recalled.

Dzurinda rejects both proposals for the recall of Fronc and himself, describing them as a step towards chaos.

"The basic question is whether this would be good for Slovakia. Smer's proposals are about creating chaos in Slovakia," Dzurinda told journalists ahead of the May 3 coalition council meeting.