Spa industry sweats it out

REFORMS in the country's healthcare sector have reduced the number of patients seeking treatment at Slovak spas. The result is that spas are starting to focus on a different clientele - visitors from home and abroad interested in relaxation and wellness stays. 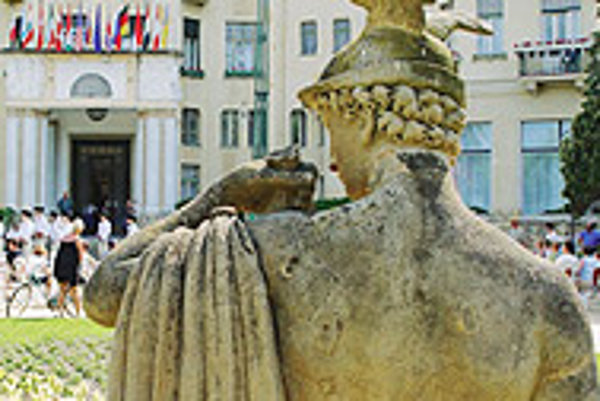 Font size:A-|A+0
REFORMS in the country's healthcare sector have reduced the number of patients seeking treatment at Slovak spas. The result is that spas are starting to focus on a different clientele - visitors from home and abroad interested in relaxation and wellness stays.

Recent healthcare changes included a reduction in patient coverage for spa treatments. Spas that catered primarily to Slovak patients are facing financial shortfalls. Even spas known for their foreign clientele are hurting, reporting a lower number of visitors this year than last.

Furthermore, since healthcare reform took effect January 1, only a specialist physician (as opposed to general practitioner) can prescribe spa treatment. This creates bottlenecks and discourages patients from seeking spa treatment. For example, it can take weeks for a patient to schedule an appointment to see a specialist. Once there, the specialist often lacks the necessary patient history to prescribe a series of treatments that satisfies the individual patient.

While spas make more money when patients, not insurance, cover treatment, few Slovaks are willing to pay out of their own pockets. The price for a two-week stay in a Slovak spa complete with special treatment can sometimes reach the price of a holiday spent abroad. Ultimately, spas are facing a financial shortfall.

Obertová said that spas recorded the first significant drop in client numbers at the beginning of 2004, when insurance for spa treatment was transferred from social insurance company Sociálna poisťovňa to health insurers.

"In 2004 we recorded a year-on-year decrease in the number of patient guest nights by 20.9 percent. In Piešťany spa, it was a 17.3 percent drop; in Smrdáky, the drop represented 26.3 percent," Obertová said.

The company also reported drops in patient volumes in January 2005, after healthcare reform introduced patient contributions for treatment of category B and C diseases.

The Smrdáky spa, which specializes in treating skin diseases, suffered more from the impact of reform than the Piešťany spa. While mainly domestic patients visit the former, the latter enjoys a solid reputation among foreign clients who are better equipped to pay for the services.

According to Labudová, the advent of reform resulted in "a new type of clientele, so-called B patients that have to pay for part of their treatment. People are only slowly getting used to the fact that they will have to subsidize something that used to be paid in full by insurance". She added that only a small percentage of clients are "A patients".

The Health Ministry expects that its healthcare reforms will eventually improve spa treatment and services. With spas competing for clients, they will have to lift the quality of their services to survive.

The ministry does think that any major changes are required in current healthcare legislation, although it admitted that slight adjustments are needed.

Karol Farkašovský, a Health Ministry spokesman, told the daily Pravda that the ministry is proposing an adjustment in legislation that would give general practitioners the authority to prescribe spa treatment for patients with B- and C-category diseases. The change would come into effect in July 2005 if parliament approves the measure.

Reform not solely to blame

The Slovak spa industry might have avoided high client dropout rates if other external factors had been favourable.

"The spa and tourism market is influenced by numerous factors. In 2004, the German spa market stagnated, and this is a key foreign market for Slovak spas. Additionally, the Slovak crown strengthened at the same time that Polish spas introduced an aggressive and competitive pricing structure," said Obertová.

She added that even though her company takes great pains to attract new clients and retain existing ones, everything together - internal reforms and external factors - made the challenge a tough one.

Labudová agreed: "The number of visitors to Slovak spas could have been higher if Poland had not introduced measures to protect its tourist industry, such as partial reimbursement for holidays spent at home in Poland. However, an increase in our Czech clientele was a positive factor."

Slovak spas are hoping that an increasing interest in relaxation and wellness will partially cover the loss of Slovak patients seeking treatment for illnesses.

To attract healthy clients to its facilities, spas are investing in fitness equipment and modernizing or building new facilities.

"In the recent past, our spa has gone through an important reconstruction. In the future we will implement further developments from the point of view of quality and quantity. We want to focus on paying clients and reconditioning stays for businesspeople, as well as fulfilling our requirements to health insurance companies," Labudová told The Slovak Spectator.

"In the future we expect an increase of middle-age and younger clients. These clients are interested in active stays (golf, tourism, water sports), family holidays as well as health prevention. They are also interested in congress stays connected with relaxation."

Most spa business insiders expect that the number of spa visitors will grow but that the average length of stay will decrease. "The level of occupied capacity will remain at the level of the last one or two years," Obertová predicted.