TEAM Slovakia clinched first place in its basic group at the World Ice Hockey Championship on May 4 with a powerful 8-1 victory over home side Austria. 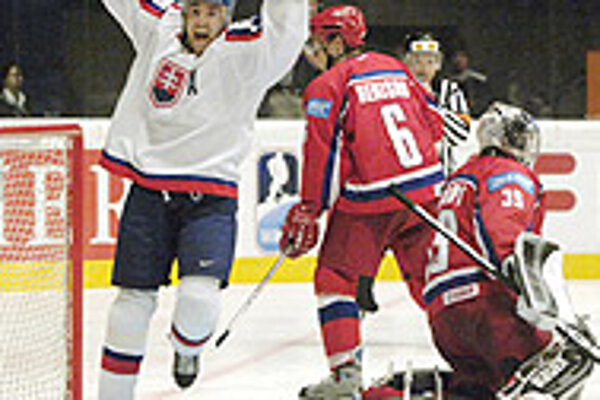 Font size:A-|A+0
TEAM Slovakia clinched first place in its basic group at the World Ice Hockey Championship on May 4 with a powerful 8-1 victory over home side Austria.

The win, which included two-goal performances by star forward Ziggy Pálffy and defenceman Martin Štrbák, left Slovakia tied on points for first place in Group A with Russia, but ahead on goal differential.

While two of the other four basic groups had not finished play by the time The Slovak Spectator went to print, Slovakia looked set to face the Czech Republic, the likely winner of Group D, on May 7, and then two opponents from the trio of Kazachstan, Switzerland and Germany in the week ahead.

Under the rules of the annual World Championship, the top three teams from each basic group advance to a qualification round, in which they are divided into two further groups - "E" (made up of the six teams advancing from A and D) and "F" (six teams from B and C).

In their qualification groups, each team faces the three it has not yet played. The final standings for each group are based on the results of qualification play, as well as the results recorded in the basic round against the teams that advanced.

Slovakia thus entered the qualification round play with a win (2-1 against Belarus on April 30) and a tie (3-3 against Russia on May 2) to its credit, while the 8-1 win over Austria did not count because Austria did not advance.

In the win over Belarus in its tournament opener, the Slovaks fired 52 shots at opposing goaltender Andrei Mezin but failed to capitalize on their many chances until Ottawa Senators winger Marián Hossa banged home a pass from Minnesota's Marián Gáborík early in the third period.

After Belarus responded with a potentially deflating goal less than two minutes later, the Slovaks returned to the attack and were rewarded in the 57th minute after Gáborík and Hossa again combined for a score, this time by the speedy Minnesota winger.

The Slovak goals were the first the team had scored in over five periods of play, going back to a

3-0 defeat by Sweden in an April 27 exhibition game.

"The more you want it, the harder it is to score," said Hossa after the game. "Even though we were reassuring each other on the bench, saying we had enough time and we would make it, we were all worried by how many chances we had missed."

"We left our souls out there," said Gáborík.

The tie against Russia two days later saw a balanced performance by both teams, with Russia storming back in the second period to match two early goals by Pálffy and Hossa, and then Viktor Kozlov's tally in the 58th minute dashing Slovakia's hopes of winning on a third period bullet by Los Angeles ace defender Ľubomír Višňovský.

"We have it in us to do better, we should have won," said Pálffy, 33, who has declared that this Championship will be his last.

Rather than the hockey action, however, the quality of the ice itself dominated comment at the tournament. Despite having been awarded the Championship in 2001, the Austrian organizers proved unable to provide a decent ice surface to play on, and during the Slovakia-Russia game, pools of water collected on the rink, while the ice along the boards was chipped and ragged.

"It was terrible, like being in a sauna, we had to drink lots of liquids," said Pálffy. "As time went on, conditions got worse, and we couldn't do any fancy combinations. I'm surprised the World Championship is being held in such catastrophic conditions. I'm sure even if they moved it to somewhere in Yugoslavia, it would be better prepared."

Head Coach František Hossa (father of team members Marián and Marcel) joked at a press conference following the game that "I had the impression we had come to a swimming pool rather than a hockey rink".

Center Jozef Štumpel added a quip that "this is the World Championship of water polo, not hockey. The ice is worse than village hockey ice."

By the Austria game, however, measures by the tournament organizers to improve conditions - including closing a practice rink in the Vienna complex and concentrating refrigeration equipment in the main rink - as well as colder outside temperatures began to take effect.

"We were able to pass a bit," said Pálffy. "I'm glad we were able to treat the fans to some pretty goals. Now we can relax and concentrate on the next round."