Symphony made from junk

BROOMSTICK bristles swish, balls bounce, garbage cans clang, and oil drums boom. Even newspapers rustle. Sound and rhythm is lying dormant in everything around us. It just needs the right person using the item in the right way to awaken it. 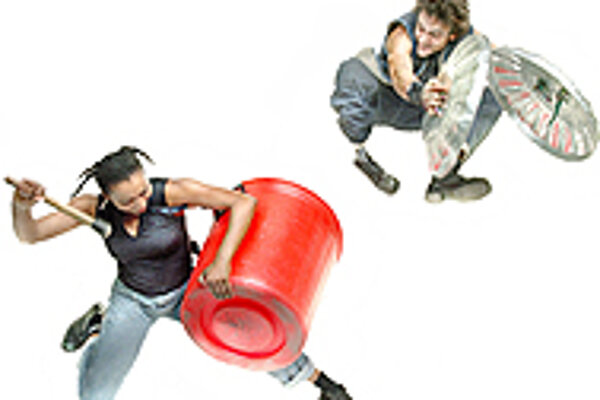 Font size:A-|A+0
BROOMSTICK bristles swish, balls bounce, garbage cans clang, and oil drums boom. Even newspapers rustle. Sound and rhythm is lying dormant in everything around us. It just needs the right person using the item in the right way to awaken it.

This is the basis of Stomp, the award-winning percussion show from Brighton, England, which features performers playing everything from cigarette lighters to kitchen sinks, to create what the British Broadcasting Company called "a symphony made from junk".

Founded in 1991 by Luke Cresswell and Steve McNicholas, two musicians with extensive television experience, Stomp consists of carefully choreographed, fast-paced scenes, such as Bins and Poles and Hands and Feet, which demonstrate incredible energy and drumming skills, as well as charisma, creativity, impeccable comic timing, and athleticism.

Cresswell and McNicholas search carefully to find cast members who will create exactly the right kind of chemistry.

"Obviously we look for people with a sense of rhythm," Cresswell said, "but also with a sense of adventure, who want to take the project on and want to create something themselves."

And what they create is visually and rhythmically powerful. In one routine, cast members actually swing in mid-air, the lighting flashing dramatically. They even play the stage itself. In Stomp, there are no limits. "You don't have to buy a cello or a drum kit to make music," McNicholas muses.

Worldwide audience reaction has been as overwhelming as the show itself, perhaps because Stomp takes many of its ideas from real life.

"Ideas come from anywhere," Cresswell said. "A lot of it is using manual props because they obviously lend themselves to rhythm and drumming, like a broom or hitting a dustbin or hammers. Other ideas are more surreal."

Stomp is also filled with a lot of humour, which plays an essential role in keeping the scenes together. In one routine, cast members walk across stage on giant oil drums, except the shortest cast member, who gets small drums.

Such humour is a product of Stomp's creative atmosphere.

"Each performer has to be prepared to bring out some aspect of his or her personality," Cresswell said, "to create a character that lives and breathes in the Stomp world, where rhythm is the only language."

In this way, Stomp reminds humanity of its common bonds. "The great thing for us," says Cresswell, "is that theatre and rhythm is common to all cultures. Since we don't use words and we don't use melody, we are avoiding the elements which divide us."