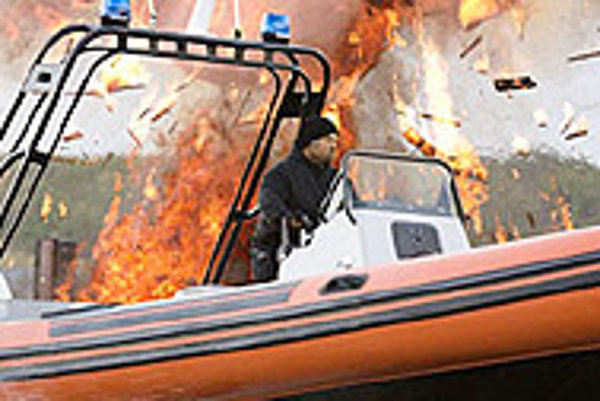 The show, hosted by hip-hop star Xzibit, has become one of the channel's most popular over the past few years - certainly an impressive accomplishment for a program that is so consistently unbearable. Basically a makeover show for automobiles, Pimp My Ride documents the transformation of cars from ordinarily trashy (some might say dilapidated) into obscenely gaudy. Inevitably the cars' owners strangely eat it all up. They whoop and holler as they examine the freshly chromed wheels, the new "booming" sound system that will enable them to be heard from blocks away, and the powerful new engine that will announce their arrival from an even greater distance.

They recruited hip-hop icon Ice Cube, a man whose early persona paved the way for drivel like Pimp My Ride. Cube should not be faulted for what has come in his wake, however. In addition to creating some fantastic music, he has consistently proven himself one of the most engaging of the hip-hop stars turned actors. His movies are not always so great, but his charisma is impossible to ignore. Whether strutting about menacingly or subtly mocking his macho persona, he's a joy to watch.

The man who most refuses to get out of his way is US Secretary of Defence George Deckert (Willem Dafoe), a former general who had Darius put in jail for leading a mutiny against him. Convinced that the US president is too soft on his country's enemies, Deckert plans to assassinate him and seize control.

To stop the coup, Augustus Gibbons (Samuel L Jackson) of the National Security Agency springs Darius from jail. To prepare for battle, they go to Darius' old stomping grounds, the projects of Washington, DC. Here they find covert auto shops, where self-described "hustlas and thieves" build fast, flashy cars armed with high-tech weapons. Darius reminisces with and gets equipment from his old girlfriend Lola (Nona Gaye) and his friend Zeke (played by none other than Pimp My Ride Host Xzibit).