The art of communication 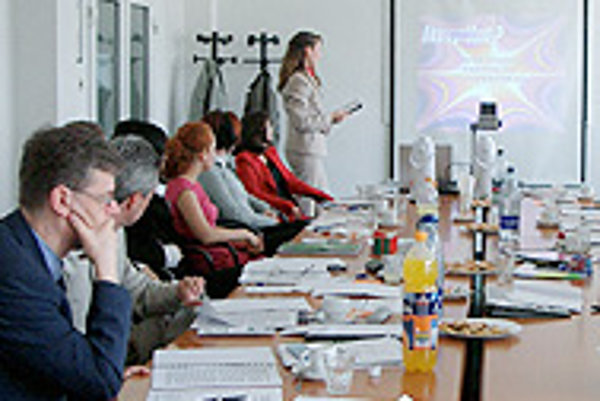 According to experts, in order for Slovaks to attain such lofty heights, however, they must learn the art of communication.

"Human communication is not acquired knowledge, it is a learned skill," Vladimír Labath, an executive director of ARK, a communications and mediation agency in Bratislava, told The Slovak Spectator. Assuming that communication must be taught and practised rather than casually picked up, Slovaks are in a tight spot: there are few places within Slovakia where aspiring executives can hone the craft.

America woke up to the necessity of good communication in the early 1920s. Organizations like the Toastmasters, a group dedicated to teaching and fostering the art of effective public speaking, were established throughout the country. Membership exposed people not only to speechmaking but also to constructive criticism on how to improve.

Some say now is the time for Slovakia's awakening.

The situation facing young Slovak business people is better than it was 10 or 15 years ago. Many young professionals today benefit from international experiences; they have improved their communication skills through cross-cultural interactions.

It is precisely these experiences, Labath told The Slovak Spectator, that will allow young Slovaks to compete with westerners.

Ivica Forrová, a marketing and PR manager with Junior Achievement Slovakia, an educational NGO, believes that Slovakia's membership in the EU and the arrival of international investors is resulting in a more demanding economic environment. She says that receiving the right set of skills to negotiate this new business environment is very important.

Forrová is convinced that Slovaks in general are at a disadvantage when it comes to succeeding on a global business market. What is missing, she says, is not only economic experience of how the western world works but a lack of corresponding social skills.

Marcel Feliks, from the Leadership Development Programme, educational organization, agrees. He says that Slovak managers rely on a trial-and-error method of leadership success, which is one of the main reasons that Slovaks limp behind their colleagues in more established EU member states.

He suggests that in Western European countries, managers have had ample opportunity to learn the art of communication, and they undergo specific leadership training that hones their skills.

Some blame Slovakia's education system for crimping communication skills. Martin Poliačik, the director of the Slovak Debate Association, established in 1999, remembers his school years like this: "The education system in Slovakia puts enterprising students with personality into a box marked 'rebels' instead of supporting them."

The lack of support for freely expressed opinions is thought to be mirrored in Slovak society. Even communication professionals, such as ministry spokespeople, have trouble expressing their points of view in a succinct way without prior preparation.

"External communication is an art and a lifestyle. For spokespersons to be able to react to questions quickly and with positive impact, they must endure long and arduous training," said Feliks.

Labath established ARK after discovering a niche in the business communications training market. ARK offers services primarily to corporations with an international presence.

When the company tried persuading Slovak firms to take advantage of their services, they met with resistance.

According to Labath, Slovak firms did not understand why the company would make a significant monetary investment in teaching its employees communication and presentation skills.

Business communications experts beg to differ. They say that inexperienced speakers don't realize that content is immaterial if speakers fail to capture their listeners attention.

Common themes of ineffective communication are failing to maintain eye contact, lulling the audience to sleep with a quiet and monotone voice, or distracting listeners with nervous gestures, such as shifting one's body weight from one foot to the other.

Fortunately for Slovaks interested in making an impact with effective communication, all is not lost. Agencies like ARK, Junior Achievement Slovakia, the Slovak Debate Association and the Leadership Development Programme offer opportunities to all those interested in developing and improving their communication skills.

Those who enjoy the training provided by these organizations can enter local competitions to compare their skills against others.

Training is not limited to adults or business professionals. Young leaders who dream of becoming a future CEO of a Fortune 500 corporation can learn tricks of the trade from Junior Achievement Slovakia, which puts on a Young Leader competition.

Likewise, university students and new managers can find help in the Slovak Debating Association, which offers a programme based on academic debate that has been part of the Anglo-Saxon education system for more than 100 years.