Harmony of body and soul

HOW often have you found yourself pondering the exploits performed in martial arts movies? Did you believe your eyes when you saw Chinese actors break bricks with their heads, run across water or keep their balance on a tiny piece of ground at a precarious height? 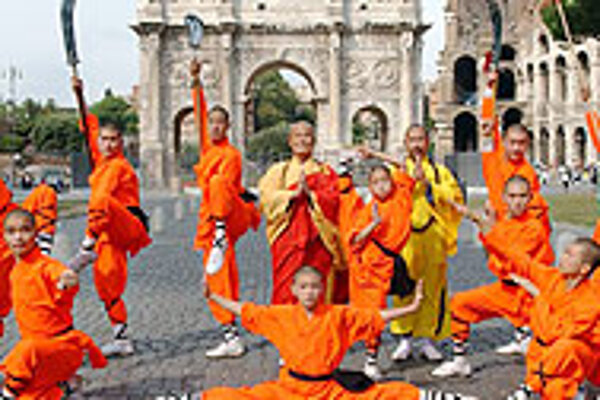 Font size:A-|A+0
HOW often have you found yourself pondering the exploits performed in martial arts movies? Did you believe your eyes when you saw Chinese actors break bricks with their heads, run across water or keep their balance on a tiny piece of ground at a precarious height?

Some of what you have seen on the silver screen now comes to Slovakia in real life. Twenty monks from the Shaolin monastery in China perform a two-hour show of improbable feats called The Mystical Powers of the Shaolin, with which they are currently touring Europe.

Following more than a month-long postponement due to visa problems, Slovak lovers of martial arts finally get the chance to see it. The show stops in Žilina and Bratislava on May 17 and 18, respectively.

"After visiting tens of countries around the whole world, including the USA, Slovakia has to be the country with the problems," said Miro Bátovský of the Zetmedia agency, which is organizing the performance in Žilina.

"It casts a rather negative light on the Foreign Affairs Ministry, as Slovakia's tendency is rather to the contrary - to open up to the world by welcoming foreign cultures to its territory or exporting our culture abroad."

The Shaolin monks' history dates back to 540 BC. At that time an Indian Buddhist monk called Bodhidharma came to China and founded the monastery in the province of Henan, some 700 kilometres southwest of the Chinese capital, Beijing. Bodhidharma introduced Buddhist principles into Chinese teaching and developed a new spiritual path - the Shaolin school.

Focussing on harmonizing body and soul the monks devised meditation and training methods that gave them complex physical skills and became the source for many martial arts practised today. Today's inheritors of the Shaolin tradition now come to Slovakia to demonstrate their skills.

The teachers and their students will perform various fighting and self-control techniques accompanied by Shaolin temple music. Three million people in four continents have already seen it.

The monks will be breaking wooden poles on different parts of their bodies, including their shaven heads, bending iron and pushing a load with a javelin poking into their necks, feats that can only be successfully performed because of life-long training in the monastery.

"A highlight of the show is when a young boy grasps a bowl with his belly, just by creating an under-pressure of such power that one can lift the boy up while still holding the bowl," said Bátovský from the Zetmedia agency, which might also bring similar shows to Slovakia in future.

The Mystical Powers of the Shaolin performance starts May 17 at 19:00 at the Na Bôriku Sport Hall in Žilina and May 18 at 18:00 at the Pasienky Sport Hall in Bratislava. Tickets are Sk111 and Sk333. They are on sale at the venues or via www.ticketportal.sk.