UNIVERSITY education will continue to be offered free of charge. The Slovak parliament rejected the Education Ministry's plan to introduce tuition fees, which would have required students to contribute up to 30 percent of their education costs. 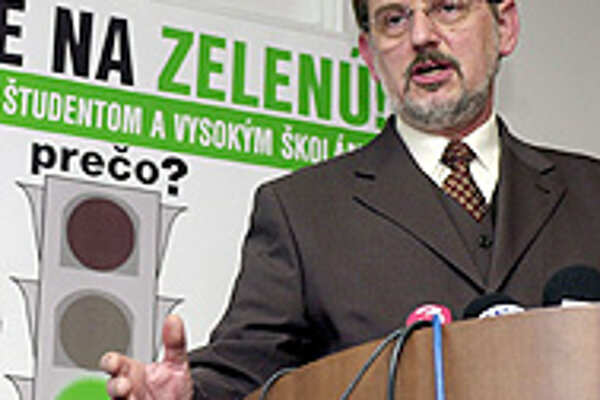 Font size:A-|A+0
UNIVERSITY education will continue to be offered free of charge. The Slovak parliament rejected the Education Ministry's plan to introduce tuition fees, which would have required students to contribute up to 30 percent of their education costs.

In the May 17 vote, 62 out of 146 MPs supported the fees. A simple majority was required for the reform's passage. One MP abstained and 79 voted against the measure.

The New Citizen's Alliance (ANO), a member of the ruling coalition, voted against the ministry's reform, causing outrage among its coalition partner, the Christian Democratic Movement (KDH). Martin Fronc, the Education Minister behind the reform, is a member of the KDH.

According to Fronc, who repeatedly submitted his reform to parliament, the ANO is clearly to blame for the most recent failure.

"[Education reform] was not passed because a coalition partner did not support the cabinet's programme," he told the press shortly after the vote.

According to Fronc, the ANO's vote was "plain political punishment".

The ANO objects to both Fronc and his policies, making their disapproval of the minister well known in the weeks ahead of the vote. At one point the ANO demanded that Fronc step down from his ministerial post.

The ANO's decision to vote against the coalition party line was not a surprise. Party officials indicated that the ANO would not back the measure because it did not trust Fronc to implement the reform.

According to ANO Chairman Pavol Rusko, however, the ANO is "not against the reform as such".

The ANO took exception to Fronc's proposal because it did not guarantee that the quality of university education would improve.

"We are not convinced that Minister Fronc, who has already lost our confidence, would be able to successfully defend the reform, considering it would be implemented in the third year of the [four-year] election term," said Beáta Brestenská, a member of the ANO.

Despite defeat, Fronc has no plans to resign. However, he said he would not reintroduce the reform to parliament before the next election in the autumn of 2006.

Fronc's rejected proposal would have revised the existing law on student loans, allowing the creation of a new system of stipends as well as loans advantageous to students.

The introduction of fees, however, met with considerable opposition, not only among the left-wing parties but also among students themselves, many of whom feared that they would not be able to afford them.

Jana Sviteková, the chairwoman of ŠRVŠ, which is the university students' council, said Fronc's proposal "did not address the quality of university education at all".

While she is happy that Slovak MPs defeated the reform, she hopes Minister Fronc will continue talking with the ŠRVŠ on how to improve Slovak universities.

By refusing to back Minister Fronc's reform, the ANO has complicated the relationship between the ruling liberals and their conservative coalition partner, the KDH.

Hrušovký also said that the KDH would no longer feel obligated to uphold commitments in any decision making or voting in parliament. He would not specify exactly what he meant by this, however.

The KDH is not planning to leave the coalition. According to Hrušovský, it is "looking for ways to address Rusko's style of politics."

ANO MP Ľubomír Lintner said that the ANO's position on Fronc and university fees did not mean the end of the current cabinet and its reforms, as some observers have suggested.

"Despite the existing situation, there is still room for cooperation inside the coalition," Lintner told The Slovak Spectator May 18.

He thinks, however, that coalition partners such as the KDH should not expect its coalition peers to accept everything that is proposed.

Grigorij Mesežnikov, the head of the Institute for Public Affairs, a think tank in Bratislava, agreed that the ruling coalition was not in danger of falling apart over Fronc's failed reform.

"The interest of the current, four-party coalition in ruling together is stronger than the existing internal conflicts. The relationship between the KDH and the ANO was at the zero point long before the situation with the university fees arose, so I don't think this actually makes the situation any worse," he said.

He added that Hrušovský's recent statements should not be taken literally.

"You can surely expect further criticism of the ANO and Rusko from the KDH as well as the remaining ruling parties [the Hungarian Coalition Party and the Slovak Democratic and Christian Union]. The KDH might also try to complicate the passage of the ANO's future proposals in parliament, but overall, I don't think this will make the KDH behave disloyally towards the coalition as such," said Mesežnikov.

Prime Minister Mikuláš Dzurinda appears to agree with the analyst, according to a statement released after the May 18 Coalition Council meeting.

"Although it is a mistake and a misunderstanding, every day brings new challenges and I believe that we will stand the tests that are ahead of us," Dzurinda said.

"Academic life goes on. Now we have to look for ways to compensate for the money that could have come to universities in the form of fees," replied Juraj Sinay, the president of the Slovak Rectors' Conference, in response to a question by the SITA news agency.

Meanwhile, the ANO is planning to introduce the concept of university fees for part-time university students. According to estimates, there are around 50,000 students in Slovakia of a total of 150,000.